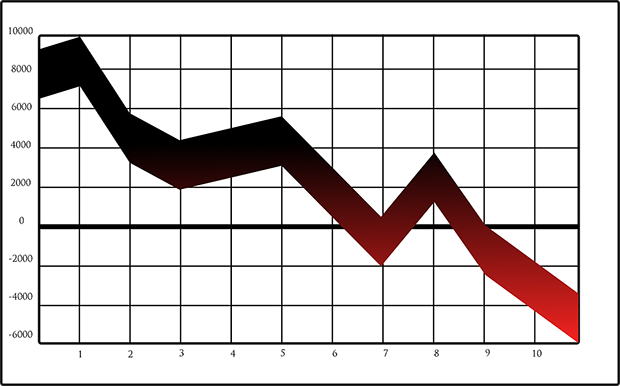 Z3er James Jansen shared the following dream, which he received on August 5, 2012, as shared in a previous post on October 7, 2013.

About 10 minutes after I woke up the morning of 8/15/2012, the recollection of a brief dream came back to me. In the dream I was standing before an old TV set and on it were the words “World Collapse” with the numbers 117 at the bottom of the screen. The numbers could have been 1117. That’s it.

His initial impression was seeing the number 117 at the bottom of the screen. The meaning was not revealed, but since these events appear to be unfolding now, it makes me think 117 might be referring to Nisan 17 since Nisan is the first month of the year on the Hebrew calendar. This year, it aligns with Saturday, April 11. Perhaps that date will have some significance in the market crash now underway.

James – I think the 117 could be 7/11 or July 11th. In many parts of the world, the day is written first. 711 has a lot of significance to the most powerful people. Exalted Lamb1 Youtube channel explains this.

Also I found this information. Seven is the divine number of completion, given that God created the Heavens and the Earth in seven days. (He worked six days and rested on the seventh). A week has seven days and the seventh day is the Sabbath, the most holy day of the week. Eleven represents five books of Torah plus six books of Mishna

Since a few people have stated that the numbers could actually be 1117, I think it’s interesting that season 11, episode 17 of The Simpsons is the Trump episode. I probably wouldn’t have noticed it, but a post from ten hours ago involving that episode just showed up on my timeline on the social media site I’m on. Maybe it means something, maybe not. I’m just putting it out there just in case. After all, some people really do think that, for whatever reason, if it happens in a Simpson’s episode, there’s a chance it could be prophetic. Like I said, for whatever reason… Some people would tell you that God works in mysterious ways, so who knows.

This could be nothing but today the number of US deaths from the covid-19 are 117.

take a look at the economist cover 2020
the first 20 is red
the second 20 is green
my impression is that the worst comes in the first half of the year and then they create a turnaround.

“to usher in the NWO they will release hidden technologies, create mega campains to end hunger and other stuff. this is before they tighten the screws again.”
(source Lindsey Williams)

another prophetic word from “chuck pierce”? mentioned that after passover things will get better.

anyhow the financial destruction will be visible in the coming weeks.

a lot of small buisness in europe will be out of buisness as they had to close and had to pay their workforce but they had only costs and no income.

Nisan 17 is in the middle of the Passover week, specifically the Sabbath. Might be significant.

Last week. I had the most starling dream. It was very short. I heard someone say “Look, there’s a new star in the sky!” I looked at the sky and nestled near the center of a waning crescent moon was a bright star. It looked like the symbol of Islam. EOD I knew that like the star of Bethlehem, the A/C had his own counterfeit sign in the sky. The things that happened to the one true Christ will be mirrored by the A/C. These are times like we’ve never seen in our lifetime. We need to cling to our LORD and Savior Jesus Christ and trust He will keep us safe and secure no matter how the days ahead play out. Shalom, Beloved.

If this is too long, my apologies (please delete, if so)…

I keep seeing 1117. This could be the date 11/17. Your article prompted me to look into the date and its history. Things that have happened on 11/17 and thoughts of each:
1603 – English explorer, writer and courtier Sir Walter Raleigh goes on trial for treason. (Sir Walter Raleigh sent 2 separate groups to colonise Roanoke – Dare County, North Carolina which would become known as the “Lost Colony” due to their mysterious disappearance. Raleigh was also sent to divide the spoils of the Portuguese merchant ship, “Madre de Deus” – Mother of God. Raleigh, many historians believe, was unjustly executed. His last words were reported as, “Strike, Man, Strike”).
1777 – Articles of Confederation (United States) are submitted to the states for ratification. ( guiding principle of the Articles was to preserve the independence and sovereignty of the states. The weak central government established by the Articles received only those powers which the former colonies had recognized as belonging to king and parliament.)
1800 – The United States Congress holds its first session in Washington, D.C. (Slate was clean for the new nation of the USA, hope was high. Now look at our Congress – divided, compromised, highly politicized, incompetent, working for themselves and not the people.)
1858 – Modified Julian Day zero. (Julian day is the continuous count of days since the beginning of the Julian Period)
1858 – City of Denver, Colorado is founded. (Now considered the default capital of the USA if Washington, DC is compromised in some way. DIA is filled with Elitist symbology: New World Order Airport Commission Plaque, the Luciferian Blue Demon Horse greeting travelers outside the airport, the disturbing, haunting murals that depict death and destruction of the world by a fully, clothed Nazi-ish death soldier with a scimitar and full-headed gas mask. Why were these put in plain site in an airport?)
1903 – The Russian Social Democratic Labour Party splits into two groups: The Bolsheviks (Russian for “majority”) and Mensheviks (Russian for “minority”). (Isn’t the current Democratic Party distinctly split? The nation is distinctly split in all ways: gender, political, spiritual, economical, generational.)
1933 – The USA recognizes the Soviet Union. (Former nation of Russia suffered a great famine in 1932-33 whereby millions starved to death and in 1933 paranoid over Nazi Germany culminated in the great purge whereby hundreds of thousands of political “spies” and suspected disidents were murdered by the Communist Regime.)
1967 – President Lyndon B. Johnson tells the nation the following regarding Vietnam, “We are inflicting greater losses than we’re taking…We are making progress.” (At the end of January, 1968, the Tet Offensive began with a series of surprise attacks by the Vietcong against American forces and their South Vietnam allies. LBJ wasn’t making progress like he thought?)
1968 – Viewers of the Raiders–Jets football game in the eastern United States are denied the opportunity to watch its exciting finish when NBC broadcasts Heidi instead, prompting changes to sports broadcasting in the U.S. (People are groomed to watch the “boob tube”; it is the modern day “bread and circus”. People become angry when the entertainment is removed.)
1973 – President Richard Nixon tells journalists/reporters that he is “not a crook”. (None of our politicians are crooks, right?)
1993 – US House of Reps pass resolution to pass North American Free Trade Agreement. (Ross Perot, pay attention to the “giant sucking sound” of jobs moving out of the nation. Perot was warning the American people. How many really paid attention or cared about the damage that was/is coming?)
2013 – Midwest struck by catastrophic tornadoes in the Midwest (including Indiana, Illinois, Michigan) that saw at least 72 tornadoes including 7 EF5’s and 2 EF4’s.
2019 – First known Coronavirus case tracked to 55 year old man in Wuhan, China. (Pandemic comes from China which is the nation that is set by the UN/NWO to take over as the ruler of the world. The only real problem standing in the way is the American people.)
Annually – Martyr’s Day in Orissa, India (Orissa, India has the 3rd largest population of Dalit or “scattered” people. Gandhi used the term Harijan which means “people of God”. Christians all over the world are maimed, kidnapped, tortured, brutalized and murdered for being Christian. It will continue.)
Annually – Struggle for Freedom and Democracy Day in Slovakia and Czech Republic. (Both nations are of the former Soviet Union which governed their eastern bloc satellite nations with all types of brutality. The younger generations of the US have no inkling or idea what it was like to live under Socialist/Communist/Facist regimes. To live without Freedom, the youth do not understand what this would be like. They are given a vision of the Utopian Kingdom without the dystopian reality of said kingdom. The US scoots ever closer to voting in such a regime).

Mena Lee Grebin recently posted a word entitled, “Put on Your Armor Daily!” in which she said “Watch for the eighth month… it will be significant.” The eighth month on the Hebrew calendar is November, yes? Or she could mean watch for August. Here’s the post: https://www.hiskingdomprophecy.com/put-on-your-armor-daily/