You are here: Home » Prophecies » “A New Intifada” 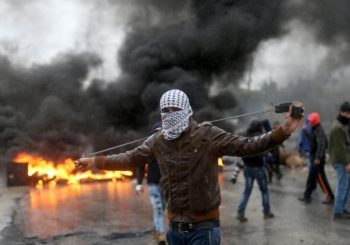 I was in Israel, in Jerusalem, near the Dome of the Rock. And I saw a Muslim woman get shot and killed by the Israeli police.

Then I saw the spirit of death hovering over Israel, but it wasn’t allowed to make its way into Israel to harm Israeli’s.

I then heard and saw “Iran, Turkey, Lebanon, Syria, Iraq”. I had a sense that these nations were raging against Israel.

I then heard “A New Intifada”. I saw a Palestinian flag be raised up in the middle of Israel, all the way to the sky, but it got ripped down very quickly and aggressively by Israeli government.

I then saw tank shells being fired into Gaza apartment buildings.

I saw the Lord Jesus Christ coming as the King of Kings and He stood upon the Mount of Olives. He destroyed the nations that were gathered against Jerusalem in the Valley of Megiddo with the brightness of His coming.

I also saw Putin in a large building that looked like a very important, rich government building and he walked up to the President of Iran with a document. I knew the document was concerning the oil of Israel. Putin was promising Rouhani that he would not only protect him militarily but that they would share the oil.

I believe that there will be war in Israel that will begin because of war with Iran. I believe Israel will go to war with Iran very soon. It will not only cause all the nations mentioned to rise up in pure hatred against Israel, but it will start a “New Intifada” that will cause many Palestinians to be killed. I believe Israel will enter Gaza and ravage it. The spirit of death will be upon those who oppose Israel including the Palestinians. The Muslim woman I saw get killed by the Israeli police I knew reperesented many Palestinians who would rage against Israel for what they did to Iran and it would cause a “New Intifada”.

The Lord reminded me of Psalm 83 and Ezekiel 38. When I saw the Lord come and stand upon the Mount of Olives, it was very important regarding timing. Remember, these nations, including the primary three (Russia, Iran and Turkey) made a pact just last year. We are closer to the end than many think simply because of the fulfilment of end-time prophetic Scripture. The nations are raging and plotting against God’s nation of Israel. I have such urgency in my spirit. I believe we will see war very soon.

There is such an urgency to pray for Israel. Pray for the peace of Jerusalem. Pray against the spirit of Islam and the spirit of fear. The enemy is plotting and planning and wants to destroy Israel. We know the end of the story but we must pray that both Jews, Arabs and anyone else involved comes to saving faith in Jesus Christ. This is very urgent right now. I believe these things are quickly approaching.

Indeed, he who watches (keeps) over Israel never slumbers or sleeps. Psalm 121:4

“Hear the word of the LORD, O nations, and declare it in the coastlands far away; say, ‘He who scattered Israel will gather him, and will keep him as a shepherd keeps his flock.’ Jeremiah 31:10

For the LORD will have mercy on Jacob, and will yet choose Israel, and set them in their own land: and the strangers shall be joined with them, and they shall cleave to the house of Jacob. Isaiah 14:1

May the Lord bless and keep you, shine His face upon you, and give you peace.

Love you, your brother in Christ, Matthew Elijah Love.

Jerusalem if I forget you, let my right hand forget what it’s supposed to do!
I agree and say Amen!
Matthew this urgency is not yours alone. Praise GOD for hearing ears and seeing eyes
This tiny little place that shapes the world
Men fail to understand by coming against it (Israel) they are literally getting in GOD”s face as it is the Apple of HIS eye
Every knee
Muslim knees, agnostic knees, unbelieving knees, and every tongue must confess
That JESUS is LORD. what the LORD has put on my heart as I have prayed for the jews is to pray for their pride to break and their heart to soften so the scales can fall of their eyes and they can see the ONE WHO HAS ALWAYS BEEN! The RISEN!
This closing window of grace is extended for the non believing to get saved.
Let’s join Matthew and pray!

The Lord reminded me of Psalm 83 recently.

Thank you for sharing Grace!

Thanks for all the helpful comments. Here is an absolutely amazing documentary about the massive revival taking place in Iran. The Lord is saving so many there. Yes, we must pray for our brothers and sisters in Iran. Amen! Praise the LORD.

This dream is so current as I believe also it can happen at any time. Look how life has changed world wide over a virus. Everything I was taught as a teen in youth group many years ago is coming alive.As I read the Bible it seems to be alive coming off the pages. I pray for all the lost that there is an awakening before it is too late! Thank you for sharing your vision.

I had a dream last night of Israel going to war. It seemed to be a fast and intense war. All of a sudden someone found a bible and they said ‘we have hope that this is a sign it will end quickly’. The bible was worn and seemed to appear out of the ground/rubble and it was lifted up as the above comment was being made. The bible was a dirty (dusty) worn orange(ish) color.

Thanks Matthew. great reading. I agree with you that we may be a lot closer than we think to a Middle East War.

God bless U and your family.

A couple of notes.
Iran can completely lose a war with Israel and also survive for many years to come

So expect Israel to come out like an underdog team in the Super Bowl with trick plays playing with desperation bravery and a whole lot of trickery., with a lot of courage and daring
in unexpected places.

If Israel truly engages Iran with everything Israel can bring to the situation,
the Iranians who try to destroy Israel will be impacted psychologically and emotionally on a leveled it hasn’t been seen for at least 1 generation in that part of the world.

Pray for the Christians in Iran. There is supposedly a huge Spiritual Awakening going on in that country with Christianity.
Pray that they would be hedged about, protected and blessed in this time and Beyond.

Pray for the leadership of Iran to accept Jesus and turn away from hell in this world and Hell in the next world as well.

Pray for people in and the leadership of Israel to come to know Christ as their Savior and understand He is a big God.

And please pray for the people and leadership in the USA to understand Israel was all of its many flaws and failures is still God’s chosen and protected people and
Israeli people will only bless this nation.

Thank you and may God bless you.

Please pray for the people in leadership in the USA to understand that our support of Israel and will only bless this nation.

Also please please pray for the Arab Christians who live in Israel and also in the West Bank and Gaza Strip. They are perhaps in the toughest situation of any people in Israel. Pray for them and their families to be blessed protected and expanded. Thank you.

Iran/russia/other middle east countries will not win the war, Israel will use nuclear weapons near the end out of desperation and no allies supporting them. Israel will suffer significant damage, Libya/syria/Gaza will be completely destroyed and most middle east will be devastated. I still believe the war would happen next year, I might be wrong.