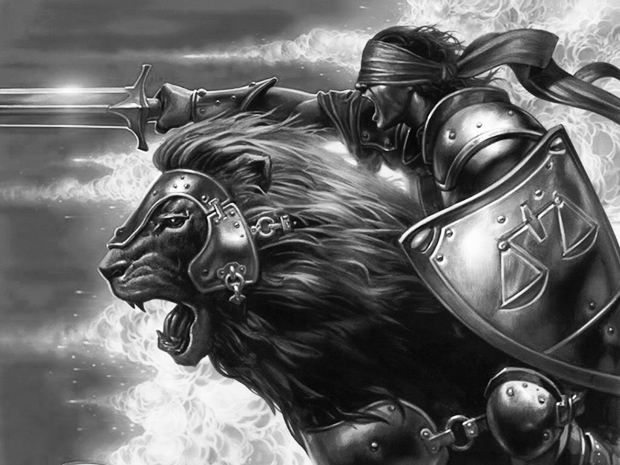 On September 18th, 2017, while in prayer, I was shown a vision from the Lord revealing an assignment to which the Bride will be sent.

In the vision, I was on my knees praying. Suddenly, I was joined in the spirit with members of the Bride of Christ from all over the earth. It was as if we came together as one. We rose from our kneeled position, and I saw our garments were clean, white, and glistening. I felt the Power of His Love flowing mightily into us!

The scene changed and I was immediately charging towards a gigantic double door entrance to a dark castle. As I neared the entrance, I extended my right hand toward the doors, and they imploded! It was totally dark inside, but as I entered, a light emanating from me pierced the darkness lighting up the space surrounding me.

I raised my right hand and pointed to the wicked entities within the room, as orders and proclamations flowed from my mouth. I heard the sound of chains rattling as the enemy was bound. It was then I heard other chains as they fell to the floor, and knew captives within the castle were being set free.

Room to room I went until I was back where I started. As I marched out of the castle, I was aware of a large train of people following me. I then heard the Lord say,

“You will stretch forth your hands and you will be used as My Instruments of Righteousness!

A few days before, the Lord had given me the following, which I detailed in a previous post entitled ‘You Will Speak Forth Mysteries,’

“I saw a large crack in the ‘dome’ above the earth. It was the territory of the prince of the power of the air, Satan’s dominion of darkness. As I looked, a large fist-shaped beam of light shot from the earth and smashed into the crack, splitting it wide open.”

At the time, I was shown as the Bride of Christ begins to walk in the power and authority given her by her Bridegroom, obeying the commands, “You Must Take Dominion” and “Ask Me to Expand Your Territory,” our Father will be faithful to answer Her request. Cracks will begin appearing in the “dome” covering of the kingdom of darkness as The Bride begins to take dominion and walk in this expanded territory.

The Lord has shown through various dreams and visions that, at an appointed time of deep trouble and calamity, the Bride of Christ will rise and become as one with her Bridegroom. She will walk in the FULLNESS of His Glory for an established time upon the earth. (see The Power of His Love)

During this time, the Lord is saying,

“You will stretch forth your hands, and you will be used as My Instruments of Righteousness!”

What was given next reveals the Bride’s role in this assignment.

A friend who’d been praying in the spirit at the opposite side of the room with me suddenly announced, “Prepare the Court Room!”

The next morning, the Lord gave the following scripture:

“For the weapons of our warfare are not carnal but mighty in God for pulling down strongholds, casting down arguments and every high thing that exalts itself against the knowledge of God, bringing every thought into captivity to the obedience of Christ, and being ready to punish all disobedience when your obedience is fulfilled (2 Corinthians 10:5-6).

Notice “arguments” will be cast down. Arguments are presented during a court case. Every “high thing that exalts itself against the knowledge of God” will be cast down. The Father has committed all judgment to the Son, and has given Him authority to execute judgment (John 5:22, 26-27).

The Bride will be ready to punish all disobedience once her obedience is fulfilled!

To “punish disobedience” is to inflict a penalty for an offense. It is to carry out a “judgment.” As She stretches forth Her hand, some will be healed, raised from the dead, made whole and set free. Others will be cast down and destroyed.

The Bride is being called, chosen, and purified. She is being transformed into His likeness. At the appointed time, her transformation will be completed, and She will go forth in His Fullness. In the power and authority given her by the Bridegroom, the Bride will burst through the cracks forming in Satan’s kingdom of darkness, splitting it wide open. She’ll enter into the enemy’s camps and territories, bind the strongman, and set captives free!

As the Bride stretches forth Her hands to be used as His Instruments of Righteousness, the biggest rescue mission in the history of mankind will take place. What a time to be alive!

Please take what has been shared before the Lord in prayer.

Scripture References:
For the weapons of our warfare are not carnal but mighty in God for pulling down strongholds, casting down arguments and every high thing that exalts itself against the knowledge of God, bringing every thought into captivity to the obedience of Christ, and being ready to punish all disobedience when your obedience is fulfilled. (2 Corinthians 10:5-6)

For the Father judges no one, but has committed all judgment to the Son…, so He has granted the Son to have life in Himself, and has given Him authority to execute judgment… (John 5:22, 26-27)

How can one enter a strong man’s house and plunder his goods, unless he first binds the strong man? (Matthew 12:29)

For these God foreknew he also predestined to be conformed to the image of His Son. (Romans 8:29)

Or do you not know that the saints will judge the world? And if the world is to be judged by you, are you incompetent to try trivial cases? (1 Corinthians 6:2-3)