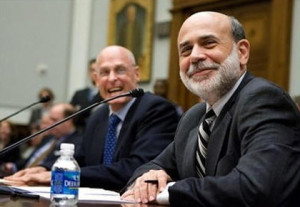 According to a top-level financial insider, elite multinational bankers are planning to take down the U.S. economy.

The anonymous insider uses the alias name “V” for his protection. He provides details of the plan bankers, also known as banksters, have devised to implement a total take down the United States economy. They are currently positioning their own assets and preparing their safe-houses. Once they are ready, they will shut down the markets with a goal of wiping out their own massive derivatives debts, which are in the trillions along with over $17 trillion in debts of the U.S. government.

The financial insider’s comments were made on April 15, 2013, when he was a guest on the Hagmann and Hagmann Report Radio Program. The following is the transcript of his comments.

The plan is this, helicopter Ben Bernanke, our boy Jamie Diamond, Lloyd Blankfein at Goldman Sachs, and those that are the heads of other investment and multinational banks, the too big to fail banks, those guys are going to be out of the market and in their safe houses about 2 1/2 weeks before this thing comes down. That is the plan.

So if you have the elite of the world having gold, silver, Swiss francs, food, firearms, ammo, think about it, they are already ready. They have safe-houses in areas of South America. Some are way up north in Canada. Some of them are all the way in the east in Asia in certain spots. That is where they are. Those are the three spots. I also hear rumors of a safe-house somewhere in Africa, Northern Africa I think it is, but I don’t know which country. That is where these guys are all going to scatter to while the rest of us implode and eat each other. That is what they have planned.

Many of these guys have houses in China. Some of them have safe-houses in the most desolate places that you can only get to with a helicopter or a bush plane. They will be there 2 1/2 weeks before the actual collapse happens. They will be video conferencing before it happens and looking like business as normal. Not even their own employees that are close to them are going to know. Not even their assistants are going to know where they are.

Markets will be shut down at around 12 o’clock or 12:30 and just leave them off because the collapse is going to be so quick.

Here are their goals:

1. Never allow a nation such as America to ever rise again.

3. Global integration into macro clustered cities and locations all throughout the world.

4. Have one global currency system that allows everything to be tracked and everything is ubiquitous from your smart phones to your refrigerators, your appliances, your bank accounts, everything is linked. You are what you buy. These are the variables they’re going to take into play with this coming global currency.

Let me tell you something, when you see what they have planned for you, you will yearn for Hitler’s Germany by comparison. When you see what the bankers have planned for you, you will yearn for Stalin’s Russia. You would much rather live in North Korea. Unless you prepare now and wake up out of your sleep, unless you stop brushing this off as mere hyperbole, as just another raving lunatic on the radio, unless you wake up and take action, what is coming for you and for your children, catastrophic is an understatement.

To call this whole thing a rigged casino is an understatement. This is the most devilish Ponzi scheme ever in history.

When I saw that they were going to collapse this whole thing, then I began to see banks systematically going out of business. I began to see the shotgun murders, taking out banks like Bear Stearns.

When I started studying the derivatives and how enormous of a problem it has become, I said to myself that these guys are either flat out lunatics and don’t know what they’re doing and are really stupid or this is something that is planned and orchestrated. I ruled out that they are stupid. They are not stupid because if you are stupid it is an accident that happened here and it is over and done with. But when you see a recurring pattern of it happening over and over again and those same people that are causing the problems are getting more and more powerful, stronger, into stronger positions of financial power and authority then you start realizing this is not some accident, like the news media wants you to believe. This is a planned and orchestrated take-down of the US economy and the global economy as a whole. That is what tipped me off.

The following scripture shows how the judgment of God works. It is based on what we do with the light that we have been given.

This is the judgment, that the Light has come into the world, and men loved the darkness rather than the Light, for their deeds were evil. For everyone who does evil hates the Light, and does not come to the Light for fear that his deeds will be exposed. But he who practices the truth comes to the Light, so that his deeds may be manifested as having been wrought in God. (John 3:19-21)

God judges each person and each country based on what they do with the light they have been given. America was founded by Christians. Our Declaration of Independence, our Constitution, and our laws were originally based on the Bible. Our forefathers paid a great price for the freedom to build our country on these principles. Because of their wisdom, America became the greatest, most prosperous nation on earth.

We have been given a great spiritual heritage. Churches and Bibles are available to us in great abundance. However, we have dropped the ball. We have forgotten the God of our fathers. We have allowed our government to change many of our laws. They are continually changing more of them to legalize immorality and make it a crime to practice Christianity.

The problems we are now facing will continue to get worse until we address our relationship with God. We can implement other plans and fixes, but nothing will work until we get our spiritual house in order. Here is the only answer that will work.

But seek first His kingdom and His righteousness, and all these things will be added to you. Matthew 6:33

If you would like more information about how you can have a personal relationship with the Lord, click here.