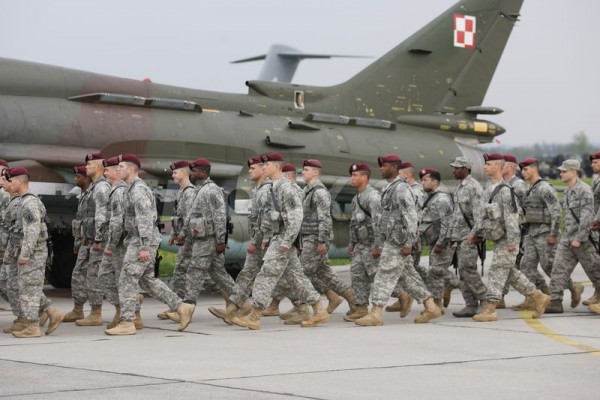 U.S. military generals have proposed sending more U.S. forces into Eastern Europe. The proposals were shared in an annual meeting of U.S. defense leaders this past weekend at the Reagan National Defense Forum.

The new proposal would increase the number of U.S. brigades in Europe at any given time, but rather than deploying troops permanently, they would rotate in and out for six month terms.

The proposal for more rotating forces must be formally developed by Pentagon planners and then approved by the Obama administration and funded by Congress. The military will push for the inclusion of funding in a budget request to be sent to Capitol Hill early next year, officials said.

Gen. Philip Breedlove, the supreme allied commander of the North Atlantic Treaty Organization, said “Decisions on the proposal will be made “in the next couple of months.” (Source: WSJ)

“What we’re talking about is not putting more troops permanently in Europe. That is sort of a tactic of the past, Pentagon officials will tell you. Instead we are talking about rotating units. These units would still be based in the United States, but would come over for six months at a time.”

“The U.S. has one brigade already that does this, but we’re talking about multiple brigades. And in addition to infantry brigades, we’re talking about artillery, attack aviation, a much broader range of military power that would deploy for temporary periods of time.”

“The eastern European allies very much want something like that to happen.” (Source: WSJ)

This story caught my attention because it fits what I saw in a dream back on March 1 2015. I saw a proposal developed from within the Obama administration for $200 million. It was then given to President Obama for authorization. Not only did he approve it, but he increased the amount to $1.2 billion. I shared the details of that dream in my previous post, The Event Before the Event.

In my dream, I did not see what happened to the proposal after President Obama authorized it, but it makes sense it would need to go to Congress for spending authorization. The cost for implementing this proposal has not yet been announced, but we can expect to see that number soon.

Based on the timing shared by Gen. Philip Breedlove, he expects decisions to be made within the next couple of months followed by Congressional approval early next year. The event I was shown to watch for had nothing to do with Congress. I was shown President Obama’s authorization would be the sign that would cause increased tensions and an economic collapse would come soon afterwards. For more details about what I saw in the first dream from 7/7/2014 see my previous post, Warning Sudden Economic Collapse Coming in 2015.

Tensions are already higher than at any time since the end of the Cold War due to events in Syria and Ukraine, but the latest plans would cause tensions to increase even more. The plans call for increased U.S. troops in Eastern European nations such as Lithuania, Estonia, Latvia, Poland, and Belarus. In a related story, the Wall Street Journal reported two weeks ago on NATO’s plans to increase troops in the region.

Russian military forces have already taken a series of steps to deter this kind of escalation by the United States.

Russia has been building up and modernizing its military to make U.S. steps to reinforce European defenses more difficult. Russian submarine patrols and exercises have increased dramatically, Navy officials have noted.

Thanks to all the Z3 watchmen helping to report developments like this!

Obama is desperately trying to get WWIII going, whether in the Ukraine or Syria or South China sea. Does his firing of so many of his military commanders tie into this scenario also, or is it mainly about them refusing to kill US citizens?http://america-wake-up.com/2013/11/03/why-has-obama-fired-197-us-senior-military-commanders-in-5-years-nine-generals-in-2013/

James, one more thing that came to me could explain why
We don’t necessarily have the the steep drop
The exact same day, as your vision only had a one percent drop
For the days end, and I think it’s because this incident is a trigger event
In a sense in that the military posturing could cause or be a part of a few causes
That prompt China to do its change of the yuan peg, so on that day as China’s getting
Ready. To give us a huge financial blow, God provides a window to take advantage of the dollar drop as well,
being careful along the way and keep our eyes open during the rest of that day with
A plan of getting in towards the end of the day.

Thank you James. The report I’m referring to is a report that is done monthly and it’s generated by software that scours the web and gauges emotional and other qualifiers of words on the web pertaining to future scenarios and it includes many other variables. It has been right about most of the items on its past reports and it’s another tool for putting the pieces together.

As for the scenario, I have had two prophetic dreams, but the gift in future forecasting the Holy Spirit uses in me is a gift of looking at various sources along with the prophecies from here and figuring the most likely scenario.

Here’s how the approach works: so this webbot report is powerful because people on the web even those that aren’t prophetic have kind of a six sense for the future and this program creates you could say one artificial neural network of the very likely predictions of the collective.

The other source I use comes directly from one of the main seers of the Luceferians, the enemy. What I believe this seer did to be so accurate about the world wars, is that he did divinations and demonic entities shared their plans with Him. This is Nostradamus. About half of his predictions
For World War 3 have passed already. He was eerily accurate for world wars 1 and 2 and I believe his visions matchup to what is being communicated to the Luceferians to do in their rituals when they call him up. So this gives us the enemy’s playbook, and I indeed believe that’s exactly what it is.

The third and most important source is this Forum, which consists of God’s modern day prophets.

By triangulating these three sources I’m getting a very eerily accurate overview of everything that’s unfolding.

The report also confirms that your right about China’s disgust, also what’s going to start the chain reaction will be China trying alter its currencies dollar peg to please the IMF, but it’s going to cause something to happen and things will nose dive and they’ll panic and send us into the currency drop by what they do, and also things the fed will do.

Going to demonic sources is a big mistake Chuck. We do not need to know the future that bad. Everything we need to know is provided by our heavenly Father. When we are determined to know and figure out everything we are already off the path because we are not trusting the Lord, but seeking to be in control of our future ourselves.

The Lord tells us to stay away from divination. ““For rebellion is as the sin of divination, and insubordination is as iniquity and idolatry” (1 Samuel 15:23) Divination is attempting to know the future through accessing supernatural sources other than the Lord. That is not what this site is about. Other people have tried to submit comments with predictions by Nostradamus, but I do not allow those comments to be posted here.

The Lord reveals things to His people by the Holy Spirit and those insights are welcome here. Even then we have to avoid trying to figure everything out and keep our focus on trusting Him regardless of the future. Our trust in the Lord must always be the central focus of everything we do.

You’re right because it could open the door to a demonic influence. I really appreciate you looking out
For me and i will leave it alone. Gods word is enough and this webbot report
Is powerful too.

James, I’m very humbled by what you have done to bring us all together and the gift you have. Be sure to read that we both report if you have time, it confirms many of the things you and everyone are sayin on this sight.

I think something that makes sense, is that there will be another provocation by maybe Russia
Or China Militarily then Obama will disregard that time line
And the haste with which he does, and the magnitude
Of the change then will cause people to panic, due to
It seeming so quick and the incident that’s about to cause
It. I believe their might be a miscommunication
Between a Russian submarine and a U.S. Navy was ship
In the Atlantic, and the navy ship commander will
Sink the submarine, thinking a strategic navy port is threatened.

I am glad to hear you appreciate the site. What report did you want me to read? Your scenario is interesting, but are you sharing it as just an interesting theory or as a revelation from God?