You are here: Home » Trading » Equities » “I will pour out My gold and the silver upon the little ones, My children who see Me at work in this moment.”
Share this post:

The Lord showed me a great bull running up to and hitting the base of a tree very hard.  And there were many birds nests up high in this tree; the tree was shaken and the bird nests disturbed so that the birds flew away.   Out of the nests came silver and gold pieces that had been hidden away and these pieces fell to the ground (a ripple effect).

Then I saw children running up to the ground and picking up the pieces; some were standing there under the tree in position and they just put out their shirts like a bag and let the coins fall into their garments.  They were laughing and rejoicing, whereas the birds were frightened away. 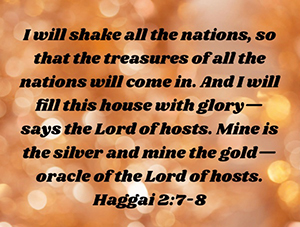 “I am the bull and I will charge at this financial tree and scare those lofty ones from their positions.  I will pour out My gold and the silver upon the little ones, My children who see Me at work in this moment. They will not be afraid, but will run toward the blessings and pick them up, whereas others have been forewarned and have already positioned themselves in anticipation of this blessing.  The gold and the silver are Mine says the Lord, and I will distribute it to whomever I please.

My children who fear not and wait upon the Lord, receive this word!

❤️Love, your Lord and Redeemer,

I believe this also confirms Christopher’s dream about the ships and the sails being set and ready to go.

Brother Christopher said back in a YT video on Sept 6, 2021 that Gold would hit $35K and then pull back to $300. That is quite interesting. Pondering.

Thank you Maria, my shirt is ready!

Hi Maria thank you for this awesome word, February or March of this year I had a dream that Silver skyrocketed, it was over 1k an ounce in the dream which would be near or over a 50x profit if you bought in around this year’s prices, over the past months I have come to the conclusion once the financial market’s crash while the dollar loses value which will cause inflation to grow rapidly this will happen, I have invested in silver, I appreciate this wonderful confirmation.

Thank you for sharing Maria! Blessings

You too! Many blessings! 🙏

Very encouraging Maria!
In 2019 I flew from UK (where I live) to northern California to inspect and negotiate the purchase of a mothballed gold mine, that is over 100 years old. I’m still in faith I will buy it, and reopen it when the “Bull hits the Tree” as you describe above. There is a silver claim near Denver, that I also visited and have agreed to buy 49% when the finances permit.
In 2018, the Lord told me I would find the largest gold nugget ever, the size of a tree trunk, and around this time the 2nd California Gold Rush would begin.
I am going to call it #DadsNugget
Let’s see my dreams come true!!!!
Ant
ps: I respect you as a prophet, so may I somewhat audaciously ask, if the Lord speaks to you about me please email what He says to max7x70@gmail.com,
Thank you in advance.
Ant 🐜