You are here: Home » Prophecies » End Time Prophecies » Birth Pangs » I heard, “The bear is on the roam.”
Share this post: 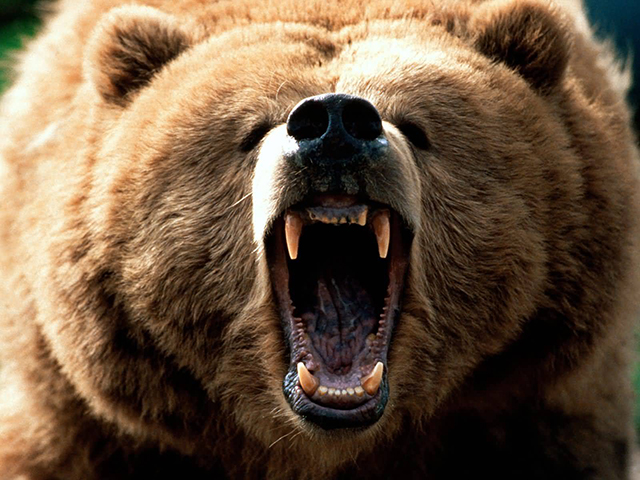 In a dream, my husband handed me a grey cardboard sheet with instructions on it.

After this, I saw other calamities impending, but wasn’t able to see what they were. However, I knew it was a further decreasing of the population.

I also saw a bear’s face drawn into the grey cardboard instruction sheet and I heard, “The bear is on the roam.” This seemed to be a battle plan and instructions that I was looking at.

Since the world population is currently only about 7 billion, I think the 100 billion that I saw changing to 100 million was just symbolically showing a dramatic reduction in population and might only apply to certain areas and not the whole world, as described here:

7 When He opened the fourth seal, I heard the voice of the fourth living creature saying, “Come and see.”
8 So I looked, and behold, a pale horse. And the name of him who sat on it was Death, and Hades followed with him. And power was given to them over a fourth of the earth, to kill with sword, with hunger, with death, and by the beasts of the earth. (Revelation 6:7-8 NKJV)

I considered the bear’s face drawn into the grey cardboard to be a reference to Russia and that Russia would be the devourer and destroyer of the people.

The bear and the tank with large spider legs sound like a confirmation of the second of the four beasts that Daniel saw, which was like a bear, as described here:

2 Daniel declared, “I saw in my vision by night, and behold, the four winds of heaven were stirring up the great sea.
3 And four great beasts came up out of the sea, different from one another.
4 The first was like a lion and had eagles’ wings. Then as I looked its wings were plucked off, and it was lifted up from the ground and made to stand on two feet like a man, and the mind of a man was given to it.
5 And behold, another beast, a second one, like a bear. It was raised up on one side. It had three ribs in its mouth between its teeth; and it was told, ‘Arise, devour much flesh.’
6 After this I looked, and behold, another, like a leopard, with four wings of a bird on its back. And the beast had four heads, and dominion was given to it.
7 After this I saw in the night visions, and behold, a fourth beast, terrifying and dreadful and exceedingly strong. It had great iron teeth; it devoured and broke in pieces and stamped what was left with its feet. It was different from all the beasts that were before it, and it had ten horns.
(Daniel 7:2-8)

23 “Thus he said: ‘The fourth beast shall be a fourth kingdom on earth, which shall be different from all other kingdoms, and shall devour the whole earth, trample it and break it in pieces. (Daniel 7:23)

This also supports what I heard in December just outside my front door in the middle of the night; it sounded like fighter jets zooming back and forth with Apache helicopters and a locomotive train. And I thought to myself, is the country under attack? Are we at war?

In a prior vision several years ago, I saw all the people were covered in ashes and grey. As they emerged from the ashes, they were completely transformed and new, like a new creation. I understood that these things happened after a great earthquake and another natural disaster had hit the earth.

As always pray to discern what preparations you should be making for your household. May God be with us!

HI Maria,
An alternative interpretation for your consideration

My thinking is 100 billion is a strange number, and doesn’t seem to apply to people on earth, as you yourself say there are approx 7 billion currently residing on it. Furthermore, bears on this forum invariably relate to markets falling/crashing.

Could the 100 million or the 1 million (you mentioned on the Divine Intel broadcast) signify the effect on the value of the asset after being mauled by the Bear? and the spidery machine (computer AI trading algorithms) be the way the bear mauls the market in your dream?

Could your Bear on the roam dream be a further confirmation of the BTC Crash?

Just a suggestion. Any comments appreciated

PS: No problem I you reject this possible interpretations. The dream is just a difficult one to understand

Better surely to pass imagery through the prophetic parser rather than cultural memes.
(I am not saying the bear cannot be Russia, but that is your leap of understanding.)

To me it is much more pertinent to discover the bear in Christ’s words.

As such, it is the 2nd beast of Daniel which gives its feet to the beast we are now under, the beast with 10 horns (imo, the Club Of Rome/Davos).

These are the roaming feet I think.
What do they refer to?
Well conventional interpretation says Persia… (I don’t actually hold with that though).

I am certain the bear can refer to Russia; have heard a couple of ministers speaking re this parallel.-understanding.

In view of what is happening geo- politically on the borders of Ukraine now ,Russian troops stationed in many areas. building up. over many weeks & months. Getting more serious since 5th Feb 2022.

Charisma magazine-End Time alliances are forming, Are you aware of the Prophetic Implications.? (the article reads).+ picture of tanks in the snow.. The ever- restless drums of war are sounding even more rapidly .Mankind’ s enduring addiction to ‘violent conflict is sure to reach a crescendo as nuclear weapons in the hands of despots signal a certain ending to hopes of peace.

Can you expand more on the vision with the ashes and transformed people? The believers (who survived) were supernaturally transformed?

If you go to my web page, onesmallflame.com; I believe it is listed under blogs for May 2018 under the title Isaiah 33; the whole dream is there. I tried to add the link but don’t think I can. It is wonderful. Thanks! Maria

I don’t think I can share it directly as I have tried but if you search onesmallflame.com it is listed in a dream from May 2018 under blogs and is titled Isaiah 33. Blessings Maria

Ash and grey can also be nuclear fallout. That would wipe out a large number of people quickly!

Ash and grey could also be from a volcano erupting!

A quick google search shows that approximately 107 billion people in total have lived on planet earth from the beginning of humanity. Food for thought…

Thank you for that! That is what I heard: 100 billion to 100 million. Just as an fyi. I did an interview with Beny Wilson and in that I explained the dream also; however I explained to him it was 100 billion to 1 million. I didn’t even realize I was saying 1 million until after the interview. Holy Spirit changed the words as they left my mouth! So perhaps this is the true number of the remnant after all the is said and done. 🙏
Here is the link to the interview.
https://m.youtube.com/watch?v=Z09dAd1d-j8&feature=youtu.be

Thank you for that! I didn’t know that! But God knows everything! 100 billion! Wow