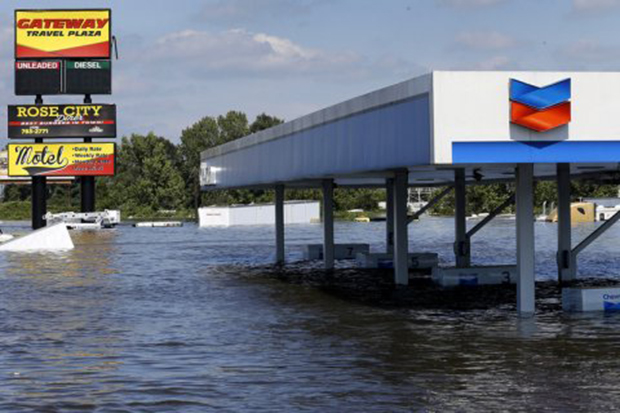 “I think I released this to the public in about 2008. I think the Father told me about it 10 or 15 years ago. This is a prophetic word for the United States. I was asking Him about our nation and where we were going and everything. And He said there would be two hurricanes that would hit the United States…  and the impression was they would be back to back.

I wondered for a while if Katrina and Harvey, you know 12 years apart, were it, but nothing resonated with me. But with Harvey and then Irma about to hit perhaps Florida… anyway, He told me there would be two hurricanes that would hit the United States and the first one would be very expensive, as would the second one. And He said it would come at a time when the Congress had many decisions to make in determining the direction for this nation. And He said after those two hurricanes, we would see an earthquake in California and that would be interesting and devastating and expensive as well. And he said it would come at a time when the United States was already dealing with the expense of the hurricanes. But you know how it is with Katrina. There are areas 12 years later where they are still dealing with Katrina, so you don’t know the timeframe.

“I also want to share a little more detail about the what the Lord said in June 2017 when He appeared to me… He put his left hand on me and said, “You will live and not die.” Then He shared some other things about what could possibly happen between that time and September 2018 depending on decision made by our Congress. A lot of it had to do with us and our ministry, things that were personal and not for public consumption, but one of the things He said about this fall in the U.S. was,

‘If the Congress does not make right decisions in accordance with what they should be doing, the investors will lose faith in their ability to enact policies and there will be an economic collapse similar to 2008, but larger in scope because the one in 2008 was just bad policy and failing companies, but this involves the president and the Congress and a lack of confidence in the ability of the Congress to get his agenda through. The effect will be worldwide.’

The context was to pray about these things that people would do the right things, so there is a lot of wisdom that is needed by the government.”

Bank Holiday and Dollar Devalued by 50%

He responded and I didn’t expect this. He said, ‘Why do you want to put your money in there?’

Immediately, there was a vision before me, like a TV screen, and I saw a bank, like on a Thursday. I knew in the vision it was a Thursday afternoon and people were going about their business normally. Then on Friday, I saw the bank closing early. Then on Saturday, the scene just shifted like a movie shifts scenes. I saw people pounding at the doors glass doors. Banks were closed and people were screaming, ‘I want my money! I want my money!’

When the banks reopened Monday morning, the US dollar was worth 50% of its value before it had closed on Friday. There was a government move to devalue the dollar.”

Looks like this prophecy is about to come true with the two hurricanes, increased earthquake activity and the out of control government spending for COVID and debt bailouts.

This is July 2018, and I have since February had 5 dreams of tornadoes (weather, persecution, political and economic, civil unrest; I am not sure), 1 dream about a coming flood, and 1 dream of a stock market crash.

I urge all of you to watch the latest Dutchsinse video I posted today as there are small earthquakes occurring around Mt. St. Helens, Yellowstone, Geyser Springs, CA and more. Three active volcanoes are going off in Japan as of last night. It is a worldwide swarm. Please be informed.

Hi James, I believe that John Fenn’s Prophetic Word about “Two Hurricanes, Two Earthquakes, Economic Collapse, and Dollar Devalued 50%” has been and is being fulfilled as we speak. We just experienced 2 earthquakes in the Mexico City region last year, we also had 2 big hurricanes (Harvey and Irma) last year, and I am thinking that we are about to experience 2 more earthquakes (Tokyo, Japan and then a few months later California and the west coast) that will bring in the last 2 stock market crashes and the devaluation of the dollar and other currencies. People are going to lose their entire 401k and IRA portfolios in the first crash and if they reinvest in the the market the second time, they will lose it again!

I believe some major disasters are about to hit Japan causing the first worldwide stock market crash in the year 2018, possibly during the first weekend in March (Gregorian calendar: March 02-05, 2018 Hebraic calendar: Adar 15-18 5778), but the events could occur prior to or after that specific weekend during the year 2018. I believe the second sudden event will be the massive west coast earthquake and tsunami.

I believe the world is running out of time to physically and spiritually prepare for the worldwide financial collapse that is coming! Please everyone, get your food provisions and buy some tangible silver and gold if you are financially able to do so!

Specifically: I suspect that the banks will close on Friday (March 02, 2018), a worldwide stock market collapse happening over the same weekend (March 03-04, 2018) and then everyone realizing that they have been had on Monday (March 05, 2018). It will be known as the first “Black Monday”. When the world stock markets open on Monday the liquidation of stock funds will commence. Also, real estate mortgages are going to go “upside down” (like in “Stranger Things”) and the dollar will greatly devaluate in the neighborhood of around 50 percent.

Sign #1 (Freezing our Assets): I believe a freeze is coming, possibly both figuratively and literally! When the economy falls, “they’re” going to do something to prevent the populous from creating a national rush on the banks. They’re going to freeze the funds. I believe that it could very well happen on Friday March 02, 2018. It will be a planned event that “they” have concocted. “They” will lie to us, by telling us that the Internet is down, our smart phones can’t communicate, and banking transactions can’t be made, due to some electronic software issues …or “they” may try to blame it on electronic data theft hackers or whatever, but no matter what “they” tell us, don’t believe “them”! “They” will be freezing everyone’s assets, so that “they” can siphon away our funds for the “themselves” (the Cabal)! If and when the freeze is lifted your bank accounts will more than likely be digitally erased!

It has been said, that ultimately, “they” want to use the aforementioned events as a catalyst, to restructure Europe and/or bring in a new currency to North and South America which will replace the dollar. “They” want to go from the once worldwide petro-dollar, green-backed fiat currency, to a worldwide gold-backed “blue” currency. If you haven’t already purchased some gold by now, it might be too late …time is of the essence. “They” plan to ultimately usher in a second Great Depression (like the 30’s) to accomplish many of “their” goals.

Sign #2 (Possible Erratic Stock Market Activity?): Prior to Friday March 02, 2018, look for the possibility of some wild and erratic stock market exchange transactions (volatility). I can’t guarantee that these will take place, but they are highly likely.

Sign #3 (Snowcapped Mount Fuji and 3 Plumes of Smoke): Mount Fuji (near Tokyo, Japan) will erupt, a massive (plus 9.0 on the Richter scale) earthquake will strike a subduction zone near Tokyo and a subsequent massive tsunami will follow. I am expecting these events to occur sometime during the dates of March 03-05, 2018. Millions of people will die from these three events. Mount Fuji must be snowcapped before the eruption takes place. Fuji donned a snowcap on Wednesday October 25, 2017 for the first time this season, which was 31 days later than last year. The snowcap typically ends sometime during the month of April. Also, there will be 3 plumes of smoke coming from the side of the volcano before it blows as another warning sign. But, I am not sure if plumes of smoke will be seconds, hours or days apart from each other. Please warn the Japanese people and everyone that you know, about the ramifications of these calamities will affect the entire world!

I cannot guarantee that these events will happen in 2018, let alone in the first week of March of this year, but I strongly believe that they will, or I wouldn’t be sending this paper out. I’m not a financial advisor, so I cannot advise anyone what to do from a financial standpoint. But if I was unprepared and was given a heads-up on these matters, I would take as much cash out of the bank as possible (prior to March 02) and funds out of the stock market if possible. I would also do some local purchasing of long-term storage foods and can goods, water and other essential supplies. Think of it this way, if nothing happens this March, you can eventually eat or give away the food, and put your money back in the bank if you so desire.

Interesting article about the impact of Hurricane Harvey. “5 feet of rain and 57 tornados” https://www.ksl.com/?sid=46245837&nid=157
The dollar hasn’t dropped by 50%, but it has really been trending down for the past few weeks. If the earthquake’s are possibly tied to a US decision to divide Israel, the recent uproar over Jerusalem and a likely Israel Iran war in the near future could bring about that scenario.

Interesting, it’s Saturday afternoon Sept 9, 2017 1:17 EST and as the kids are taking a bath out of no where my 2 yr old daughter says: “holiday” and only a few seconds my later my five year old says: “hurricane irma” several times over and over while splashing around the waterin the tub. This all develop while I was asking the Lord and debating, “should i listen to the above vide again”? Guess I got my answer out of the mouth of babes! -Selah