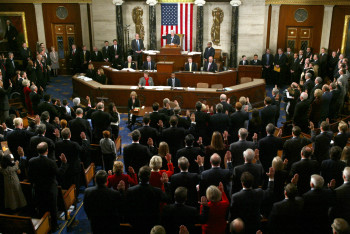 The Ukraine crisis continues to escalate with H.R. 1735 now on the House schedule as their top priority for next week. As of today, it is the only bill listed on their schedule for the week of May 11. However, the exact date for their vote is not yet known.

The House Armed Services Committee voted last week to approve $200 million in “lethal weapons of a defensive nature” for Ukraine. The funding for Ukraine is part of bill H.R. 1735, which was sent to the full House after receiving strong bi-partisan approval in committee with a 60-2 vote.

In my previous post: The Event Before the Event I shared a prophetic dream in which I saw a proposal for $200 million in military aid sent to President Obama for approval, which he then increased six times to $1.2 billion. His authorization would cause increased tensions throughout the world. In the midst of those circumstances would come a sudden dramatic drop in the stock market and the value of the U.S. dollar.

Approval of this bill would increase tensions throughout the world because of the threat of nuclear war. The Ukraine crisis has brought the world closer to nuclear war than at any point for a generation, according to an account of a secret meeting between Russian and American military and intelligence figures. The Russian generals, speaking with the approval of President Putin, said attempts by NATO to return the Crimean Peninsula to Ukraine would be met “forcefully including through the use of nuclear force”. They also said the supply of weapons to Kiev would be seen as “further encroachment by NATO to the Russian border”. (Source: The Express)

H.R. 1735 is the National Defense Authorization Bill (NDAA) for fiscal year 2016. The total bill includes $600 billion in defense spending for fiscal year beginning October 1 2015 and ending September 30 2016. Details are provided in a 498-page document. The authorization for $200 million for weapons to Ukraine is found in Section 1532 – “Assistance and Sustainment to the Military and National Security Forces of Ukraine”. This section appears on pages 51-52 of the document and includes the following text.

This section would also require a notification to specified congressional committees containing a description of the plan for providing assistance, and require a quarterly report on the status of the activities and assistance. Lastly, this section would authorize appropriations of $200.0 million to carry out this authority.

While the committee acknowledges the Administration’s efforts to provide nonlethal security assistance to Ukraine, including its March 2015 announcement that $75.0 million in Department of Defense European Reassurance Initiative funds would be allocated to provide additional nonlethal equipment to Ukraine, the committee believes that defensive weapons and training are also necessary to enhance the defense of Ukraine. The committee notes that a February 2015 Atlantic Council, Brookings Institute, and Chicago Council on Global Affairs Report, “Preserving Ukraine’s Independence, Resisting Russian Aggression: What the United States and NATO [the North Atlantic Treaty Organization] Must Do,” authored by former senior U.S. diplomatic and military officials, came to a similar conclusion in its recommendation that the United States and NATO “bolster Ukraine’s defense and deter further Russian aggression by providing military assistance to Ukraine—including lethal defensive assistance.”

The committee views this Ukraine assistance authority as part of a larger policy to reassure U.S. allies and partners in Europe and to deter further Russian aggression in both conventional and unconventional forms.

Thanks Tony! I just posted a news article about this.