You are here: Home » News » Jesuit Agendas » Censorship » “How can we expect righteousness to prevail when there is hardly anyone willing to give himself up individually to a righteous cause?”
Share this post: 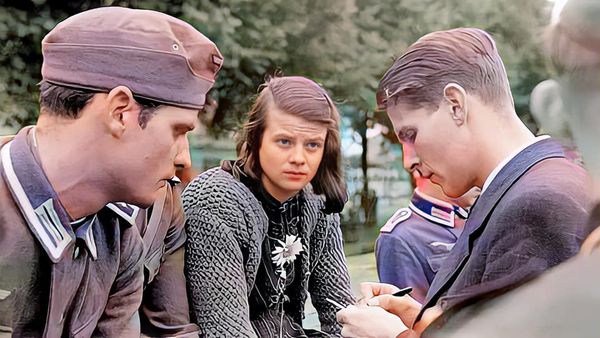 Sophia Magdalena Scholl (1921-1943) was a Christian anti-Nazi political activist, active within the non-violent White Rose Resistance group which was led by a group of students from the University of Munich, including Sophie Scholl, her brother Hans Scholl, Christoph Probst, and Alexander Schmorell. The group conducted an anonymous leaflet and graffiti campaign that denounced the Nazi regime’s crimes and oppression, and called for resistance. In their second leaflet, they openly denounced the persecution and mass murder of the Jews while the majority of the German church remained silent.

Their activities started in Munich on June 27, 1942, and ended with the arrest of the core group by the Gestapo on February 18, 1943. These mug shots were taken on the day of her arrest:

Sophie, Hans, and Christoph Probst were imprisoned, convicted of high treason and beheaded by guillotine four days after their arrest, on February 22, 1943. During the trial, no defendants were given any opportunity to speak, but Sophie spoke up anyway, interrupting the judge multiple times. These were her final words before she was executed:

“How can we expect righteousness to prevail when there is hardly anyone willing to give himself up individually to a righteous cause? Such a fine, sunny day, and I have to go, but what does my death matter, if through us, thousands of people are awakened and stirred to action?”~Sophie

Another excellent word from Sophie:

“The real damage is done by those millions who want to ‘survive.’ The honest men who just want to be left in peace. Those who don’t want their little lives disturbed by anything bigger than themselves. Those with no sides and no causes. Those who won’t take measure of their own strength, for fear of antagonizing their own weakness. Those who don’t like to make waves – or enemies. Those for whom freedom, honor, truth, and principles are only literature. Those who live small… die small. It’s the reductionist approach to life: if you keep it small, you’ll keep it under control. If you don’t make any noise, the boogeyman won’t find you. But it’s all an illusion, because they die too, those people who roll up their spirits into tiny little balls so as to be safe. Safe?! From what? Life is always on the edge of death; narrow streets lead to the same place as wide avenues, and a little candle burns itself out just like a flaming torch does. I choose my own way to burn.”

Photos colorized and enhanced by moi.

The WHITE ROSE SOCIETY, a small core group of resistance fighters, is known as HEROES OF THE RESISTANCE. Despite the fact that the organization developed and spawned several other groups, Sophia, her brother, and a friend remained the leaders. Germany commemorates their lives, actions, and deaths each year to this day. The  National WWII Museum has a tribute to them. I first learned about this little but fearsome group of college students around ten years ago, and I’m not sure why, but I was so moved by their bravery in the face of the savage Nazi and Sophia’s final words… ‘live small, die small,’ have stayed with me since then. I admire them and know that heaven applauds them.

May we in this day exhibit the same courage to stand for our faith and freedoms against all overreach and oppression.

God bless you James for posting this,

I, too, had read about them a few years back and subsequently forgotten their story. So glad James posted their great tale of strength and courage in the face of incredible evil and danger. Dietrich Bonhoeffer is another individual who showed great courage and strength during the Nazi occupation of his nation. He could have safely stayed in the US, but chose to return to the Nazi Reich where he was subsequently executed for the attempted assassination of Hitler (July 20 Plot, 1944 – he was accused of being associated with the plotters) It takes great courage to face great evil head on. Truly hope that God gives me courage when my time comes because I am not brave or courageous.

I was going to also add Martin Niemoller, the outspoken German Lutheran Pastor who spent 7 years in Nazi concentration camps. Another one of God’s people doing His work during that very dark time.

“How can we expect righteousness to prevail when there is hardly anyone willing to give himself up individually to a righteous cause?”

This may sound weird, yet, I feel like the Holy Spirit was speaking through her in her final moments. Extremely powerful words that have been ignored as we repeat history once again.

I agree. I feel the Lord raised up this small group for such a time as then. The Lord never needed but a few to change the world.

Rev. 2:10 and 12:11 “Fear none of those things which thou shalt suffer: behold, the devil shall cast some of you into prison, that ye may be tried; and ye shall have tribulation ten days: be thou faithful unto death, and I will give thee a crown of life. And they overcame him by the blood of the Lamb, and by the word of their testimony; and they loved not their lives unto the death”

James What a good question . July 2019 I heard the Lord say” go to the highway and sound the alarm”
I said what how were me. so he led me to intersection sterling HWY and sper HWY.started first day lost my voice.tried signs cardboard sharpies Holy Spirit was my teacher.

God Bless you , David. May He keep you safe and under His wing of protection.

God Bless you for posting this. I am sure Sophie, her brother and her friend are with the Lord, for that very statement in the Lord.

I have been deeply pondering over this and wondering how. I do not want to waste this life, whatever it is now, in a corner.
Praying, the Word, and some giving and sharing is fine BUT sensing a deep ache and yet helpless. O how I long for my God to Manifest as HE did in Egypt. I will do anything in that direction.