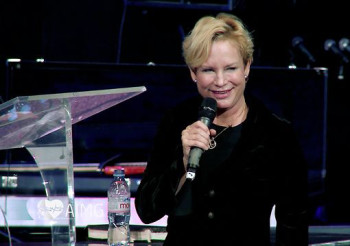 In the 2.5 minute video shown at the bottom of this post, Missionary Heidi Baker shares a vision in which the Lord showed her wealthy Americans standing in long food lines due to a sudden event.

Most Christians aren’t hearing these warnings because most churches refuse to talk about what is coming soon to America. Not only churches, but also many Christian websites, even Christian news sites, refuse to report anything about what is coming. Instead, they dismiss it as gloom and doom prophecies. Yet, the Lord is showing those who are willing to hear so they can prepare.

Here is the transcript of Heidi Baker’s vision.

“I had a vision in your church and it wasn’t what I expected to see. I saw bread lines, soup kitchens, and I saw people wearing beautiful clothing. Their clothing was not worn out. Now in my nation when people are hungry you can tell. I mean they are in shredded rags. They don’t have shoes or they have flip flops. Most of them have no shoes. They are hungry and they know they are hungry. They come for food, not because they are beggars, but because they are hungry.

I saw this bread line, long bread lines, and I said, “Lord, I don’t think that is popular to say in a church, especially one that is all about revival and victory and power.”

I didn’t want to see what I saw, but I saw what I saw so, I was so undone that I just said what I saw. And I saw all these people and they had beautiful cars, 4 by 4’s and Lexus, Mercedez, BMW’s, Toyotas. There they were with fancy shiny cars, but they were standing in line.

What I said about worrying, the worriers turned into worshipping warriors.

I asked, “Why are they so well dressed and standing in this line?”

He said, “Because it is a suddenly. They are suddenly in need of food.”

What is it that He does? For one thing He puts peace on you in the midst of the storm.”

The good news, according to Heidi Baker, is this sudden event will cause worriers to become worshipping warriors. It also brings manifestations of God’s supernatural power with signs, wonders, and miracles that Americans only hear about happening in other countries, but rarely see in our land.

I have been to Heidi’s church in Pemba Mozambique when I was working for the oil industry. The Holy spirit moves powerfully within that church. It is the real deal! If anyone is looking for a worthy charity to donate to Heidi’s church is it. Whites & blacks together helping others. The complete opposite of the Divider-in-chief. The poverty I saw in Pemba was extreme. Folks, if that is coming to America, it will be more than many can handle.

After watching some of Heidi’s sermons on youtube and reading her book, I realize THIS is the part we should pay attention “He said, “Tell them that what you see in Mozambique they will see in America with the signs and wonders and miracles. They will see it on their soil. They will see what I do.” THE MIRACLES!!!!!!! THAT’S HOW THE LORD WILL TAKE CARE OF US, The Lord gave a promise to us through her! In Heidi’s church, the Lord really PREFORM MIRACLES, food multiply to feed the whole congregration just like in the days of Jesus on earth, Heidi can heal the blinds, the deafs, even rise the deads….etc. The Lord said we will see all these MIRACLES just like in Mozambique, WOW! Praise the Lord!!!

Moringa the miracle tree is a super vitamins minerals oil natural free food.
i had some tree in my patio (back yard). here in costa rica many people had planted trees, is grown up faster than any trees known.
i believe that very soon will be my salvation for starvation,maybe around the World will be esencial.
in case of war is good treatment for a lot of desease.(more than 300)
cure any kind of sicknees.

I want to say what a comfort and teachable moment I get everytime I visit this site.. out pouring prayers in Christ name.
Bekah

Concerning Heidi Baker’s vision of bread lines
Please consider an interpretation along the lines of Leviticus 14-16. As a result of intercessions by righteous Moses and Aaron God had mercy on the regular people and brought his Glory of judgement on the leadership who were in unbelief and rebellion. It might be that the people with fancy clothes and fancy cars are representative of America’s leadership and that we Christians should be interceding the the people, saved and unsaved separating themselves from the leadership like God told Moses and Aaron to do and, standing in the gap like Moses and Aaron before our Holy God for this people who don’t know the depths of Satan as some of our leaders do.

Sorry my scriptural reference is wrong. It should read Numbers 14-16 and not Leviticus.

The Lord allow the famine and economic collaspe to come is to allow Him to preform miracles to us, so that we will really learn how to totally depends on Him, draw close to Him, Trust in Him, to see His powers and glory. To bring in the last Harvest.

My wife and I decided to stock up on water purification items and about six months supply of food… after reading a lot of what is coming to the USA. To my surprise she has stocked up on maybe SEVERAL YEARS of makeup, hair spray, deodorant, soap, toilet paper, etc… things I would have never thought of. How many of you are doing this too? We want to sow to others during this time of need. Sometimes what is coming scares me, but then I know that “Greater is He that is within me, than he that is in the world” and “I can do all things through Christ who strengthen me”. Many, including myself, will learn to trust in the Lord Jesus more through all this.

Recently I read that a lot of canned food such as Delmonte really has a shelf life of around ten or more years. Also that beans and rice have no fat content and people eating this would eventually not survive after awhile. Is this correct? Also have far down into the ground does an EMP travel? These people in the vision drove fancy cars to the feeding center so was this before an EMP? Also can cars be started (wired) a little while later?

Hi Jon, beans and rice is rich in carbohydrate which can chemically change to fat inside our body automatically. But we need more other NUTRITION SUCH as animal protein , minerals and vitamins. I would recommend to store something like dehydrated Ensure Powder and CENTRUM!! CENTRUM can be kept much longer than Ensure Powder.

My thoughts: An EMP if strong enough will burn out IC chips rendering 99.9% of electronics unusable. It doesn’t matter if its turned on or off (despite the movie the matrix), although being turned off increases chances of survival but doesn’t guarantee them. Cars may fare much better because the body of the car is metal and thus acts as a faraday cage – in much the same way that lightening can hit your car while you are inside and you will be fine. I would also think that anything underground would not be effected, and it would not have to be far at all because soil is a very good insulator. As is concrete. But it needs to be covered. The basement in your house doesn’t really count. A good basic test is that anywhere you currently have a cell phone blackspot will be safe.

Metal Lead Cover and Box is also very good for protecting electronic device from EMP. Is it easy to buy lead cover in US?

Canned goods last far longer than the pull dates. Rice and beans is almost a perfect food group…… Take a look at growing sprouts which you can do without a yard (inside). They are 10X more nutritious than the mere seeds. Simply a miracle of God.

Jim Bakker is selling 25 year shelf life food. I’ve bought some for my family. It’s about $550 worth of food for one person ( 3 meals a day for a year ). It’s a great deal. It also lasts a lot longer then canned food. His food is all freeze dried; all you have to do is add water and you can eat it. They come in these large water and air proof buckets. You can view his website at http://www.jimbakkershow.com then click on the store link.

well i invite all here and see good visión and dreams in el regresa.net
the collapse o U.S.is around the corner.
here in costa rica the economy is hitting bad.
many people from your country are coming here to live.
go out from U.S. before is too late.
you can take my e mail:dajesibar@yahoo.com
come to costa rica.

Sounds legit. She sure doesn’t need a haircut for awhile though huh ?