You are here: Home » Prophecies » Men’s Hearts Will Quake in Fear, but Repentance Will Not Come 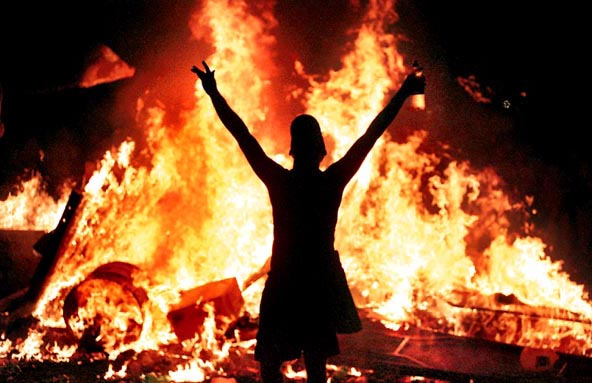 “Swift tides sweep across nation after nation, tides of deceit and disobedience to My Word. The lies of the mainstream media have spread deception and false hope to millions. Governments set stumbling blocks before their people, bringing them to a place of complacency and submission.

Obama has led America down the path to great tribulation and turmoil. He has taken your nation to the precipice, caring not for the safety or welfare of the people, he remains focused on the goal of evil taskmasters; power, submission of the masses, and world dominance.

Holiness has been destroyed by those who know not My Way nor My Word. Man’s heart is prideful, boastful, arrogant and self-centered. Man believes in self, his own wisdom, power, and ability. Refusing to humble himself or admit he does not know all, his heart grows colder and more distant. I will soon withdraw My restraint and leave man to himself. You will quickly see how man in rebellion against God behaves as he refuses what he knows to be true in an attempt to justify his actions, clinging to all he holds dear as his world begins to fall apart.

My hand of judgment falls quickly. Prepare to stand in faith as more and more you see the day approaching. What has taken a lifetime to build will be destroyed in a moment. Homes, families, jobs, bank accounts, denominational persuasions, all must be surrendered to Me. You must no longer hold tightly to the things of this world. This world holds no promise for the redeemed of the LORD.

Beginning soon, the shaking will intensify. Nation after nation will experience the hand of Almighty God coming against their rebellious unholy lives. Warnings have echoed across the waters, from sea to sea they reverberate, falling on millions of deaf ears. Men’s hearts will quake in fear, but repentance will not come. As the trumpet resounds, hearts will remain hard and cold. Eyes will not see and ears will refuse to hear.”

Jeremiah 18, written to Israel, is applicable to nations scattered across the world in the twenty-first century…

5 Then the word of the Lord came to me saying,
6 “Can I not, O house of Israel, deal with you as this potter does?” declares the Lord. “Behold, like the clay in the potter’s hand, so are you in My hand, O house of Israel.
7 At one moment I might speak concerning a nation or concerning a kingdom to uproot, to pull down, or to destroy it;
8 if that nation against which I have spoken turns from its evil, I will relent concerning the calamity I planned to bring on it.
9 Or at another moment I might speak concerning a nation or concerning a kingdom to build up or to plant it;
10 if it does evil in My sight by not obeying My voice, then I will think better of the good with which I had promised to bless it.
11 So now then, speak to the men of Judah and against the inhabitants of Jerusalem saying, ‘Thus says the Lord, “Behold, I am fashioning calamity against you and devising a plan against you. Oh turn back, each of you from his evil way, and reform your ways and your deeds. (Jeremiah 18:5-11)

January 13th, early a.m., California time, in a dream I am told by Holy Spirit that “assignments will soon be handed out on a large scale, but I would be on special assignment. Your directions will be tucked in your pocket. Don’t worry. You’ll be told what you need to do.” I wake up. I could see the folded white paper being tucked carefully in a side pocket, as in the teacher jumpers that I sew to amuse the public school children in my charge. This comforted me because our God really does know our name, our hearts and have our best interests in mind!

Praise the Lord! Our God is truly amazing! Bless your assignment with the Lord. Bring Him glory!. Praise Him and Praise Him! Our Almighty God!

Carol,
Deliverance is such a needed ministry!!! But it is the one thing that will split a church faster than anything else. The enemy does not want to give us his position and power in the lives of Christians! I remember attending Win Worley’s meetings in Highland, IN at Hedgewich Baptist Church. One time he sang his sermon (My Wonderful Lord) and there were certainly some manifestations–but people were set free. I encourage you to cover yourselves in prayer and the blood of Jesus and watch out for ways the enemy may try to pick off or divide members of your team. Praying for you and trusting that you will see great miracles in these days and many people will be set free to the glory of God!.

Linda Clay,
I have been hearing the shofars also!

Jennifer, I have recently been led by the Lord to Z3 by way of Trunews. I followed your link from the harnessing stable of the Lord dream recently posted and read your dream. From there, I have read all 2016 and am reading 2015 from Dec. backwards. Your dreams are such a gift. Thank you for faithfully sharing. I was astonished to see a photo in Aug. from your personal journal of prayer portals drawn on graph paper as that is how I keep my words from the Lord. I have heard the audible words, “Write it down. It’s all important,” from Holy Spirit so have done so. Until last January, I assumed my dreams were for me. I never thought of sharing them. In response to Holy Spirit’s prodding, began http://www.pomegranatesandchains, after He led me to verses about the two columns in Solomon’s temple (2 Chron. 3:16) when I wondered what in the world to name the blog. I realize from reading through back prophetic dreams here on z3, that God’s prophets are meeting up…faster and faster from the end of 2015 into 2016. Blessings be upon you and yours as we all work faithfully and gladly for the Lord’s glory.

TRUTH spoken on this post.
Ali, starting last week, I would occasionally hear what sounded like the combination of shofar and air raid siren . . One tone. Then it increased in how often I hear it. For the past several days, it’s now throughout the day. My husband dosn’t hear it and our cats don’t seem to hear it (they are not exhibiting any signs of distress and would be if they could hear this). This is a spiritual warning . . . Judgement. . . No turning back.

Also, I have been lead to read Jeremiah as well. The following verses stand out:
Jeremiah 3:25 –
“Let us lie down in our shame:
Let our disgrace cover us.
We have sinned against the LORD our God,
Both we and our fathers,
From the time of our youth even to this day.
We have not obeyed the voice of the LORD our God.”

JUDGEMENT is being unleashed. . .no turning back. Time to make sure we individually have a clean walk before our Holy God.

Linda last week I think on Monday I heard It has started.
So I agree.

I’m glad your cats are ok

One day last week I heard the sound of the shofar. Like you and Bob have said, judgement has begun. We MUST be in prayer and fasting now more than ever. The warnings are becoming more intense. Keep short accounts with God saints. Time is short.

I too have heard several sets of multiple shofar’s sound coming from the sky East of my home. They played in concert. It was alerting yet awesome to hear!! I heard my shofar’s on Dec 1st while listening to Mena Lee Grebin’s 5 nights of prophetic dreams from the Lord….just when she said, “the Lord gave me 5 nights of dreams…” Boom, shofar’s! My neighbor had just walked in so tell me something and I asked him to sit down and be quiet to hear Mena or go home! He sat down leaned in to hear her speak and within 3 minutes the shofar’s started blowing! It was LOUD. I knew what it was but he did not…”what are those horn? It’s coming from the sky!” We heard 3 distinct sets of them with short breaks between. My first thought was the rapture of the wise virgins…but no…then a huge announcement of judgement….maybe….a couple weeks ago on z3 was an article and in it it stated the Lord was releasing the Shofar around the world to call His last warriors for him to the battle!!! I personally believe for me it’s that call!! Two Christian friends and I have been lead into the Deliverance ministry…we did not look for it but God led us to it and is I empowering us through is spirit and the Power of HIS NAME to call out demons which have tormented lives too long! Do our churches teach this? NO, is God pleased in by the weakness of the churches!! No, judgement is coming for their half truth and rejection of major portions of the Word. I have been led to “Come Out Of her/Babylon, my people, that you don’t participate in her sins.” I really feel this is true as I seen half… Read more »

Thank you Carol for this powerful word. Praise God for your obedience to His Word. May you walk in His annointing and be covered by His righteous blood. LORD bless.

Ali such a true word of the Lord.
Amen