You are here: Home » News » Jesuit Schemes by Nation » Israel » “They are aimed at Israel, but My hand of protection is over them.”
Share this post: 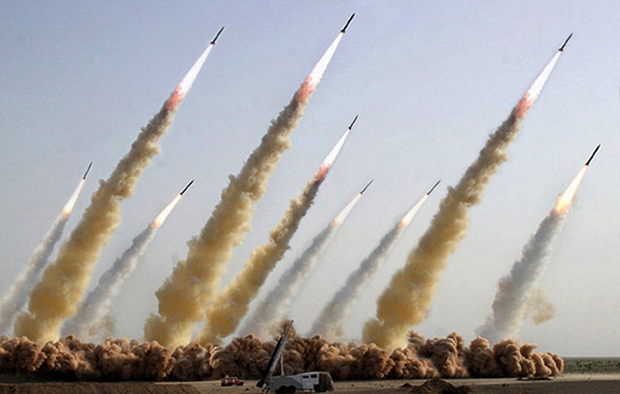 During my time of prayer this evening, the Lord gave me a vision of what I believe to be a future event in Israel. When the vision began, I found myself very high up in the air above a dessert terrain. It was a very rugged terrain filled mostly with rocks and barren hills. I asked the Lord, “Where am I?”

He replied, “The wilderness of sin.”

He said, “I brought you here to see the Swarm.”

I was then immediately brought down closer to the land and was able to see men moving about. The clothes they wore blended in with the ground and were hard to see, it was a camo type clothing. Then the Lord said to me, “Look. What do you see?”

I looked around and saw what appeared to be a black cloud that seemed to be forming and rising from the direction of the North. I realized that this was not actually a cloud as I looked and saw that it was pulsating and moving and changing its’ shape. As I continued to watch, I then saw this same type of cloud also forming to the East and to the South. These clouds appeared to me like they were forming beyond the horizon from what I could see.

I said to the Lord, “Those are some very strange clouds.”

He told me, “Look again and tell Me what you see.”

I watched in amazement these shape-shifting clouds and realized they were not clouds at all, but a swarm of something. I asked, “Are they birds or maybe bugs?” I asked this because of the way they were moving about.

The Lord told me, “Look again.”

Then suddenly my vision became crystal clear. I could see that they were not bugs or birds, but thousands of rockets!! I cried out, “Lord, those are rockets! Where are they going?”

The sky was so black from the sheer number of them!

He said to me, “They are aimed at Israel, but My hand of protection is over them.” He said, “Look again.”

I looked, and I saw what appeared like a dome-shaped screen, force field covering over the land, and as the rockets came down and hit it, they blew up. The Lord said, “My heart is for My people. I will save them in their time of trouble. Tell My people I am coming soon, and I love them.”

Thanks for sharing. Satan and his demonic forces, are of course, determined to destroy Israel.

I had a bizarre dream last night that was about a geometric sphere or spheres that contained toxic gas and was called Sirocco (sounded like Shirako). It was going to be released on very little people. I dreamed about this Sirocco all sleeping night! Strange! I looked up the google definition of this word and it is “a hot wind, often dusty or rainy, blowing from North Africa across the Mediterranean to southern Europe.”

One more thing I forgot to mention: Although the sphere I was shown was a transparent model about the size of a soccer ball, it was mentioned several times that these lattice-worked hollow balls were nano spheres. The lattice connections/tubing were hollow. I don’t understand how gas is in multiple nano spheres, but it was high tech and that was the dream.

Amen to that Christopher. I believe you heard correctly.

Thanks for the hint Joanna, I was able to download it and got the alerts yesterday as the bombs were flying and was able to pray and explain to the kids what was happening.

Brother Christian I saw on China Global television network Monday that Israel warned Iran formally that Israel will not allow Iran military bases in Syria and to remove them . Israel is drawing red lines and means it . Blessings

Probably a moot point, but I remembered the Wilderness of Zin mentioned in the Bible being the same as the Wilderness of Sin, and looked it up. It’s located next to Mount Sinai:
https://en.wikipedia.org/wiki/Zin_Desert

Interesting Joanna – can you be more explicit? This is rather cryptic

How did Yehovah call you? How did Gabriel seal it? Can you share any actions you’ve taken in response to this calling in the past 7.5 years?

During the 6 day war, many enemies reported seeing angels fighting along side the Jews, many were scared off by what they saw! When I first started researching the Bible I ran a crossed “Miracles of the 6 day war” I knew Yahuwah was and this is protecting Israel and many throughout the world. The enemies have long forgotten these miracles but Yahuwah is going to remind them, “Do not mess with my people!” The world is going to see all kinds of miracles surrounding Israel, Yahuwah is going to make Himself known! Glory be to our Father and Lord!!!
There are many articles listed here are a few I read…
Miracles in the Six-Day War: Eyewitness Accounts https://www.israelnationalnews.com/News/News.aspx/122435
Miracles of the Six-Day War
https://ffoz.org/discover/messiah-magazine/miracles-of-the-six-day-war.html
Introduction- The Miracles in the six-day war
https://www.chabad.org/multimedia/timeline_cdo/aid/525341/jewish/Introduction.htm

Went on YouTube 5 minutes ago. Could not access/find videos for ANY of the Christian Channels I follow!! I believe this points to something significant happening ANY DAY NOW! Be PREPARED! Pay your bills! Get cash out for any needs! Get food, water, etc.

Channels that are GONE! Or show the header but only 1 or 2 videos include:

Seriously freaked out! Are those of you in the U.S. experiencing this same blackout of channels?

I just looked at JESUSisLORD by Christopher and it is all there.

Expat Gal… I just looked it up also and they are there, USA is not having a blackout that I know of.

Wow! I think Youtube did a “test run” of taking down several Christian & alt media sites! They were all back up in around an hour! ?. Tonight I am going on all these sites to see if there is anything I wanted to print or save digitally from these sites. With the technology prowess of Facebook/Google/Microsoft/Twitter/etc., digital files could easily disappear. Not taking any chances based on what happened today.

Just saying all my videos are on http://www.survivetheearthchanges.com available for download. I did this as a backup encase my youtube channel was taken down. Thanks for sharing Expat Gal. God bless. Christopher.

Hi Christopher ?. So glad you have created a back up elsewhere. Many channels create their back up on YouTube which makes no sense because when YouTube finally removes the Christian, alt media & sites encouraging nations to retain their sovereignty, they will take down all the channels that deal with these topics. AI already has ALL of these channels identified. AI has caused me problems with FB posts for the past 1 1/2 years. ?. Certain topics like dangers of certain vaccines, real economic data, geoengineering efforts & some posts praising God. ?.

It was so unsettling to feel cut off from the real journalists in the world & also Watchmen/watchwomen I follow. ?. June 21st is a high watch date for many for some type of event. Yesterday’s test run by YouTube confirmed that something is coming where non-globalist owned news sources MUST be shut down. This will be a definite sign. Yesterday after this occurred on YouTube, I went to several websites of the YouTube channels I was searching for and ALL of the websites were active. So the “blackout” only occurred on YouTube. We need to be prepared. We know events, of some type, are close!