You are here: Home » Babylon » 1st Beast is Obama » I heard a voice very clearly say, “Obama is the antichrist.”
Share this post: 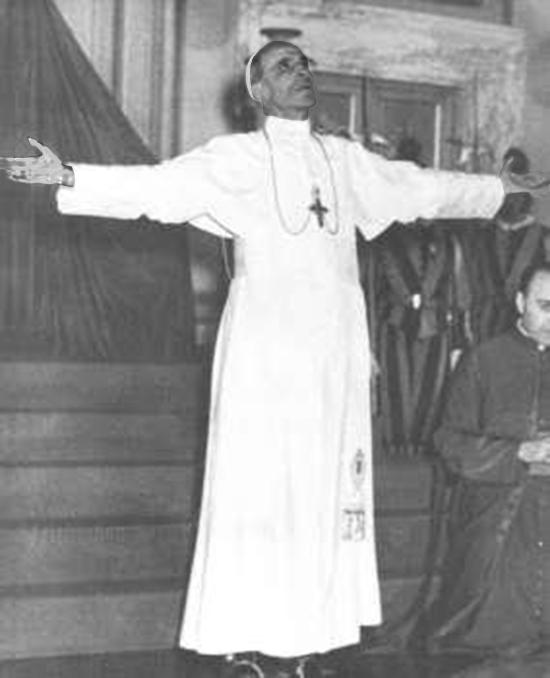 A few weeks ago, I dreamed I was discussing end time events with my coworkers. One of them said, “Barack Hussein Obama is the antichrist.”

I proceeded to tell her that he certainly fit the description and there were many people on the Internet who believed he was the one spoken of in scriptures, but God had not yet given me that revelation.

This dream revealed what my state of mind has been for the past few years after noticing that many people were claiming to have the revelation that Obama was the antichrist. In fact, there were so many that I really felt I couldn’t ignore it. So I began to pray and seek God; not in a sense of urgency, but trusting if it were so, that He would reveal it in His time.  There have been hints and promptings along the way, but nothing I could put my finger on and say, ” That’s it.”

After this latest dream, I wondered if maybe I wasn’t accepting what God was revealing. There are some revelations we don’t want to be true. We had rather be wrong. It would be easier to be labeled crazy than to accept the revelation because it necessitates a realization that unless the Lord calls you home, you are about to walk through the most difficult time in human history. So, my prayers changed to asking God to reveal if Obama was the antichrist in a way which would leave no doubt that He was speaking.

This week, I had a dream within a dream. As I dreamed I heard a voice very clearly say, “Obama is the antichrist.”

Then again a second time I heard the same voice say, “Obama is the antichrist.”

Then a third time I heard the same voice, but the tone was different. The tone was stern and emphatic and it said, “Obama is the antichrist.”

I awoke from this portion of the dream, but I continued to dream. In the remainder of the dream I was aware that I had heard the voice and I was asking people if they believed Obama was the antichrist. I was also trying to calculate how much time we had left based on his age. Then I awoke for real and realized I had been dreaming.

As I thought about what the voice said, I had a vision. It wasn’t an open vision, but a mental image. I saw Obama’s right hand and there was a garment that extended down his arm and stopped at his wrist. The garment was a white robe much like the robes a clergyman would wear. Further up the sleeve, there was a black and gold design. I don’t know if it was part of the sleeve, a sash or a stole. I have always envisioned Obama wearing a business suit, but the Lord impressed upon my heart that he will be clothed in a robe when he is declared to be God and establishes his throne in Jerusalem on the Temple Mount. ( 2 Thessalonians 2:3,4 ) All will worship him, everyone whose name has not been written from the foundation of the world in the book of life of the Lamb who has been slain. (Revelation 13:8)

I believe the Lord spoke to me three times concerning this revelation to get my attention and to emphasize that it really was Him speaking. I searched the scriptures for confirmation and I was led to the Apostle Peter in the book of Acts. Peter had a vision of a vessel filled with unclean animals descending out of heaven to him and he heard a voice saying, “What God hath cleansed, that call not thou common.” He heard this repeated three times as God was revealing to him that he had granted to the gentiles repentance unto life. (Acts 10:5-18)

I believe this example in scripture shows God will sometimes repeat Himself to get our attention and to emphasize that a message really came from Him, especially when we might have a hard time receiving the revelation otherwise.

Hi, I felt led to share the dream I had with you, I had the dream in 2018. In my dream, I saw the earth wobbling (spinning out of control and sort of falling at the same time) and as this was happening I could feel the intense anger of God. then I saw the words Aberak and Mubarak. Then I woke up. So I looked up the meaning and Aberak is a hindu word for ‘who is like God’ and Mubarak is an arabic derivative of Barak. Another interesting fact is that Obama told the president of egypt (mubarak) to step down, which he did.

I also had a vision in the form of animation where this little guy goes down into hell and gathers up the creatures or powers from the pit and as he slowly goes back up to earth, he changes into a bad guy who then destroys Trump and finally gets the whole world to worship him. Then Jesus comes and destroys him.(it’s a lot more detailed but that is the short version)

On another occasion, I was praying for confirmation and I was led to a picture of Obama.
I want to draw your attention also to the word ‘abomination’ in Revelation. Once I was going past a muslim mosque and the Lord said it was an abomination. The dome of the rock is such and there I believe will be the start of the obama nation, or his reign. (this is my own thought)

Thank you Carol. I just watched in its entirety . I have wondered at times if they were in this together. I’m speaking of the faces she seen. Thanks for sharing.

You are welcome Lydia. Thank you for sharing the music video. The first time I heard that song was at James Change platform (jcsouthwest). I am not from America so it was a first one for me. So much has changed. Missed the good all days. Blessings ♥

I had a dream a couple nights ago that reminded me of this. We were getting ready for a wedding and when we got to the location out in an open area, there were round wicker looking things like lids on a basket hung up. They had symbols on them. I didn’t know what they meant. I looked up and a horse was riding through the air. Obama had the reins. His face zoomed in. I saw very clearly it was him. Figures had the rider on the back of his horse blocked. When the figures moved, I saw Trumps hair. The face was turned but the person was riding on the same horse.

Yes Lydia, I got the same message. When He got elected, I heard the Holy Spirit say clearly, “This is it.” I knew what it meant.I have had confirmation over and over. Thank You!

here is a link to the message the sister Sherri was speaking of
http://holyspiritwind.blogspot.com/2017/03/hope-and-final-antichrist.html

Thank you. I will. You guys are awesome. So happy to be a part of this community of believers.?

Thank you Jeff! I was looking for that the other night.

Here is the Antichrist.

Daniel tells us where the AC comes from, the Lion(England) will have it’s Eagle(US) wings ripped off and a lion will stand up as a man, see coat of arms of the prince who said that when he becomes king he will be known as the defender of all faiths i.e. savior of the world.

Again in revelation we are told the Beast will have a lion’s mouth and the number of the beast is the number of a man, this lion beast man of Daniel.

Martus, that could also mean the beast is English speaking referring to the Lion’s mouth.

speculation – if barry is the assyrian and
if he occupies the new temple and
if he as the bible predicts is the one who suffers a mortal wound and
if he is the one that appears to be revived, knowing that israel is at the forefront of technology and knowing that it will only take 90 days to rebuild it and realising too, that the temple can only be built with an agreement of some type and realising that many have already called barry the messiah and would welcome his return even to the extent of offering worship to him and realising that much of the above can only be achieved with the use and help of technology (remembering that israel is a world leader in this field – and i seriously believe they will offer anything to anyone who can facilitate the rebuilding of the temple including barry soetoro) then if bazza gets the chop sometime in the future (if he really is the man of sin) then its just possible that the worship set up in the temple is a hologram or some form or type of artificial intelligence which both israel and china are excelling at.
in other words the ac will be an artificial intelligence in a virtual reality guiding the world which willingly and obligingly follows including the jews in the holy land.
my reasoning for this are the interviews and talkback by rick wiles and crew on their recent shows on technology, artificial intelligence, artificial reality and how technology is fast becoming a religion.
all supposition of course but the general gist of my comments make sense. i urge people to have a listen to all of his tech related shows including and starting with “london tech week” 12/06/2017

This very serious word of warning shared today by BETTE STEVENS (Z3 Author) was posted on this blog, “The Light Has Come.”
https://lighthascome.com/2017/06/21/prophetic-warning-heed-this-warning-shame-on-america-bette-stevens/#comment-30

I’m trying to figure out why there is a photo of Pope Pius XII associated with this post?

I selected it because of the resemblance to what Obama might look like in about 20 years. Lydia saw him wearing a white robe, presenting himself to be God.

In 2012 I had a very vivid dream. I had been seeking the LORD fervently in prayer and fasting. I tossed and turned with excitement about His soon return. About 4am is when I began this dream. I suddenly saw myself in a place where there was a room and I began to view and became very uneasy. There were a group of people dressed in satanic black robes chanting demonic prayers and then my attention changed to a woman high priestess holding a knife getting ready to sacrifice a victim with another man holding the one to be offered down. I heard myself cry out to the LORD and said I shouldn’t be here and I felt a quickening by the Holy Spirit to pray in tounges and when I did the priestess dropped the knife and ran out of the room and the voice of the LORD said look on the wall where was a cross that had a huge serpent green in color. As I followed the serpentine figure up to the head it was Obama. No doubt it is later than most think or realize. Let us be about the FATHERS’ business!

Thanks for sharing this dream Billy. I’ve added it to my collection.