In the Twitter tweet shown below, which was posted 19 hours ago, Tami Burages shares the tragic news that her completely healthy 13-year old nephew, Jacob, who had no known health problems and was not on any medications, suddenly developed an enlarged heart and died within three days after receiving the second dose of the COVID shot. 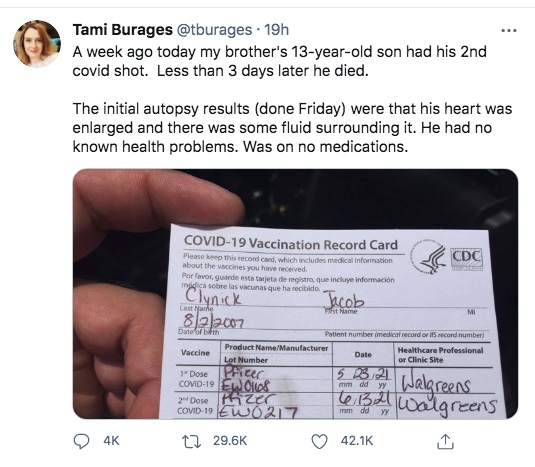 In a follow up tweet posted the same hour, she stated, “If Jacob had not received the 2nd shot, we believe he would be alive today.” In other recent posts, she shared that she is pro-vaccine and remains so even after her nephew’s death. I believe her comments show the great depth of deception now covering the world, fulfilling the Bible prophecy warning about an evil scheme that will deceive the whole world by “pharmakeia”, which is a Greek word defined as “to administer drugs”, as recorded in Revelation 18:23.

An enlarged heart is caused by inflammation, which is the same problem that many doctors have warned about the COVID shots as a reaction caused by the spike protein attaching to the ACE2 receptors in cells lining the veins are arteries. Despite the fact that our federal government health agencies are repeatedly claiming it is “safe and effective”, new reports are now confirming many other teenagers are suffering from this same problem after receiving the COVID shots, as shown by the tweet posted on June 18, 2021, by KEYT NewsChannel 3. 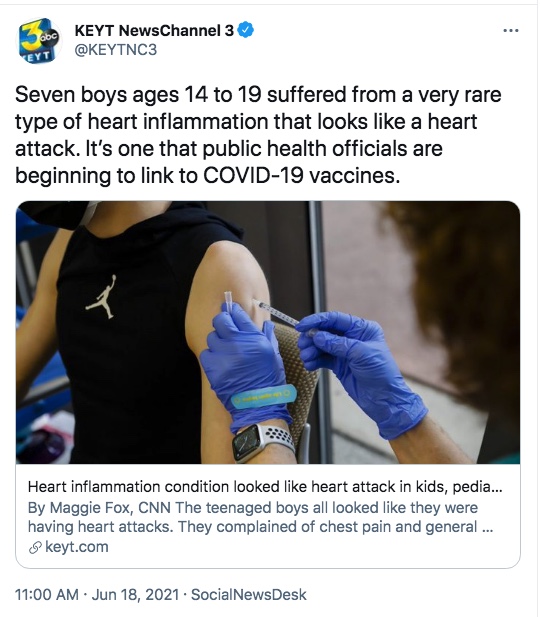 The Buck-Toothed Bolshevik is at it again:

“Teenagers should be vaccinated against coronavirus before the end of the year, while children as young as six months old could soon be vaccinated safely, experts said after the Pfizer vaccine was on Monday provisionally approved for use on Kiwi kids as young as 12.

Expanding the age range promises to help New Zealand reach herd immunity, with children aged under 18 equating to about a quarter of the population…”

I picked her up at school today and told her that if they try to give you any shot, you say no and you call us immediately. If they don’t want you to call you run home as fast as you can.

Thanks for the update Matt. The insanity of those plans is proven by the average age of COVID victims, which is 82, and almost all of them (94%) had other serious health problems. The risk of dying of COVID for young healthy people is close to zero so it makes no sense to expose them to the high risk of adverse reactions to the shots, which includes death.

Utter Wickedness and the Biden Administration does nothing. Joe says VAXs are 100% safe.

WHAT a great way to kill off all the young people in america,BRAINWASH THE PARENTS and the kids all die from their stupid parents,OUR FATHER was right,he will lose most of the people ,but he will save a few,and like He said, its better then losing them all..AND THIS is just the First of the plagues ,WE STILL HAVE SIX MORE TO GO…