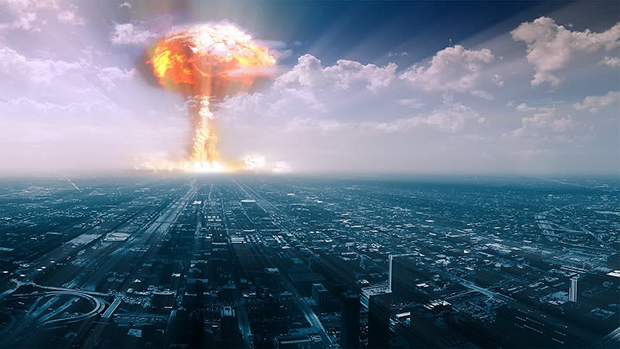 On July 15, 2018, I had a very disturbing dream, which I consider vitally important. I saw a particular city getting hit by nuclear weapons. At the time, I did not reveal the name of the city, but I also saw and heard other cities getting hit in like fashion. Now, I will tell you the city I saw was… SEATTLE! I clearly saw the Seattle Space Needle in my dream.

I shared this dream on Facebook and spoke about it on “The Prophecy Club” with Stan Johnson. Now fast forward to yesterday when a new friend, Melissa Tabor, reached out to me privately and shared several visions she received over a span of time about three particular cities getting hit with nuclear weapons.

I’m ALWAYS careful about what I share personally and am very guarded about what I share from others, but I found Melissa’s visions very credible, especially because she told me she saw the names of two of the three cities. She was not shown the name of the third, but felt that I might have a “piece of the puzzle”.

I think she is right! I think my dream, coupled with her visions, do indeed put the puzzle together. I think you will find this VERY intriguing, just as I have!

First, in my dream, I found myself scurrying down the road with two American soldiers. We were going very fast. I saw the look of fear on their faces. It was not normal fear either. It was a look of abject terror.

Then one soldier looked at the other soldier and said, “OH MY GOD, IT’S HAPPENING! ISN’T IT? IT’S REALLY HONEST TO GOD HAPPENING!”

Then I heard another radio communication. I cannot recall if this was an official announcement or from the news media, but it said, “WE are now receiving several credible reports of incoming missiles landing in Seattle!”

I saw the missiles raining down in great number, more than I could count. I saw the smoke of their burning and the city being turned into ash. I saw the people running trying to escape, but there appeared to be no escape.

I knew this strike was pre-emptive and unexpected. There were no warnings!

Then I heard another radio transmission, “And NOW, we are receiving reports of the following cities seeing incoming Missiles!”

“We moved to Las Vegas about 1.5 years ago, not by choice, but my husband is in the Air Force and we were suddenly assigned here.

After 3 months in Cleveland, I received a vision of an earthquake with aftershocks splitting a portion of Ohio, near Cleveland. Again, I was moved 3-4 months later.

This brought me to Las Vegas and what I’m led to share. Around May of 2018 (I did not write the exact date, wish I did), I had a vision of standing outside of my apartment facing the Las Vegas Strip. As I watched the strip, from the west /northwest, a streak of light came out of the sky striking the Stratosphere Tower. Immediately, I watched the strip disintegrate and the after-wave move through the valley.

Until yesterday, I had not received anything more about this vision. On November 7, 2018 around 8:30 am PST, I was making breakfast, praising God when there was a flash of light in my eyes. The light was so bright, I could not see for about three seconds. Then I saw three major cities crumbling to the ground. As the cities were crumbling, the Holy Spirit said, “It will happen in a flash.”

Next, I saw myself walking over dead bodies to my left and my right. Then the vision ended. A few minutes later, the Holy Spirit said, “I am going to give you a message for My people”.

The message came with a weight so great I was unsure if I wanted to accept it, but being obedient to God, I accepted it. This is why I am reaching out to you, Marty. One of the cities I saw was Las Vegas and another was Chicago, but the third was not named. I’m not sure if this message is specifically for you as confirmation or if you have the other piece to my puzzle.”

My friends, I find this NO COINCIDENCE that Melissa felt to reach out to me and that we both had a witness in our spirit that there is indeed a connection and certainly a warning from the Lord!
Also, I have seen other cities on both the east and west coast that were struck.

I would also add to take heed to what I believe Melissa heard from the Lord, “IT WILL HAPPEN IN A FLASH!”

Mark 10:27 And Jesus looking upon them saith,
With men it is impossible,
but not with God:
for with God all things are possible.

Last night, after my husband and I viewed updates online about the California fires (11/12/18), we spent some time in prayer and intercession for our state. As we prayed, Jesus showed me a vision of a fire burning down a hill headed towards the ocean. I clung to Jesus as we looked down at the fire burning below and then felt a heavy burden to pray and intercede for the people going through this devastation.

Below is a link to a video I stumbled upon this morning showing Kim Clement’s daughter driving home through the fires after ministering to some victims from the shooting in Thousand Oaks, Ca. She is asking for brothers and sisters in Christ to pray. God bless!

Referring to other comments re Revived Roman Empire.
Reading this today.
https://endrtimes.blogspot.com/2018/11/world-emmanuel-macron-calls-for-true.html
just confirms …re the biblical scriptural ( prophecy) time line that is happening right before our eyes.

A family member of mine had a dream a few years ago that Chicago was bombed.

A sweet prophet moved here to Missouri to help with our ministry/community recently. He’s not a self proclaimed prophet, but still one nonetheless.
We’ve been waiting for him to move here for years and God finally gave him the release a month ago. A couple and their son are also moving here from Texas. The husband is here now with their son, but the wife is still there for a month waiting to have foot surgery. She’s not strong in the faith but told me she has a feeling something bad is going to happen if she stays longer. My two cents. It feels like they’re excaping through the flames.

Are you in the Branson area?

Led by France, the European Initiative Intervention (EII) comprises the UK, Germany, Belgium, Denmark, Estonia, the Netherlands, Spain, Portugal and Finland to cooperate in the planning, analysis of new military and humanitarian crises, and possible joint activities in response to contingencies. It is planned to have a common budget.
https://www.zerohedge.com/news/2018-11-11/new-powerful-defense-alliance-changes-european-security-landscape

Thx for posting this info.about 10 nation European alliance, Joe. I’ll ask my biblical scholar friends their opinion on the possibility of this fulfilling that prophecy. Be blessed.

Thanks Ann. Now this

Europe shouldn’t be shy of using its power and should become an “empire” like China and the US, France’s finance minister said following Macron’s speech about ‘a European army’ – an idea which was later bashed by Donald Trump.
https://www.rt.com/news/443737-france-us-sovereign-continent/

Yes, Joe: this is certainly another reminder that we need pray for our God to give us & all our leaders wisdom & discretion. Also for God to put a guard over all of our mouths (or fingers if texting or typing) so that we may live a quiet & peaceable life as per holy scripture commands us; amen?

Russia didn’t name their nuclear armed missiles Satan 2 for no good reason. Babylon America will burn in due time as her sins rack up exponentially.

Thank you for this post. I too have received confirmation of this event but I was missing some of the pieces. On January 12, 2018, I had a dream where I awoke to a sunny morning and opened my phone and the immediate headlines were of a nuclear attack on the US. I knew it was the Pacific Northwest but I was not given the exact location. There was no fear or worry in my demeanor and I turned to awaken my husband and I told him, it’s time, the attack happened. End of dream. Just recently on October 24, 2018, I was given “Seattle, WA” during prayer time as a specific location for intercession even though I live in Southeastern US and have never travelled there. This post connects the two pieces and gives me more specific prayer points. God bless!

Thank you Marty for your obedience and I am praying for your health and body. The LORD has called me to intercede for others. I do want to mention something from this early morning, 11/11/18. I woke up with these words in my spirit. “The entire Air Force Base is gone!” I heard it twice. The LORD continues to wake me up at 4:44 am each morning, lately. I was asking the LORD this morning, what are you saying? When I read your post I looked up if McChord Air Force base, in Seattle, was still active. I usually don’t receive dreams or visions, but knew to take heed to those words. I will continue to pray for those as I have many family members leaving in that area. God Bless you and keep you! Nancy

Sister Nancy: I read your post yesterday morning I had no input or opinion on your revelation of an airbase’s destruction. I may be completely off but wanted you to be made aware that on 11/11/18 it’s reported the IDF came under extremely heavy fire & there WAS loss of lives. I don’t know if it was a airbase or not but last night one of my other web community members said the information would be suppressed by Israel & their enemies (that State’s Secrets policy most countries adhere to during wartime); Howe, Hal Turner received info before Bibi Netanyahu abruptly left the meeting in France due to WHATEVER happened in Gaza yesterday. Yes, please pray for wisdom for Israel & our leaders. That God’s will to be done in this situation & how it impacts our national security.

I copied & pasted this directly from HalTurners website today: “A massive attack against Israel is taking place RIGHT NOW (10:00 AM EST) Monday, November 12, 2018, emanating from the Gaza Strip.
An anti-tank weapon was fired at an Israeli passenger bus, and made a direct hit. Numerous killed and injured.At least 38 rockets have been launched from Gaza in the last ten minutes.”
My cyber-friends had stated yesterday that we wiukd NOT be hesring about this in MSM!