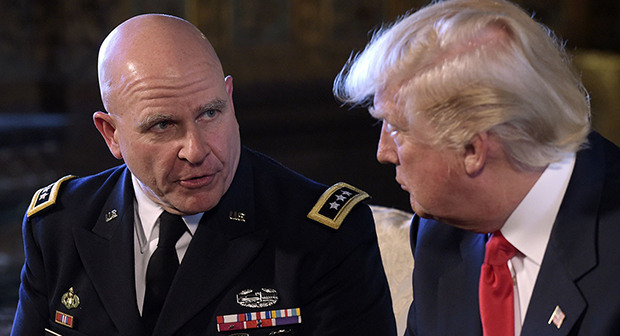 America’s National Security Advisor, H.R. McMaster, is responsible for protecting our nation, yet he doesn’t even know the Islamic State is Islamic.

Things were supposed to be different with the Trump administration. He promised to drain the swamp, but in his single most important duty of protecting our nation, he appointed H.R. McMaster as his chief advisor on national security issues, a man who doesn’t even know who our enemies are. McMaster is peddling the same globalist lies repeated by previous administrations, both Republican and Democrat, claiming Islam is a peace loving religion hijacked by a few extremists.

In an all-hands meeting of the NSC on February 23, 2017, three days after his appointment as NSC Director, McMaster said jihadist terrorists are not true to their professed religion and that the use of the phrase “radical Islamic terrorism” does not help the US in working with allies to defeat terrorist groups:

“The phrase is unhelpful because terrorist organizations like ISIS represent a perversion of Islam, and are thus un-Islamic,” McMaster said, according to a source who attended the meeting. (Source: GatestoneInstitute.org)

It wasn’t the first time he’s made such absurd claims. He was only repeating the same things he has said previously.

On December 3, in an interview with Fox News Sunday anchor Chris Wallace, McMaster stated that “we make sure we never buy into or reinforce the terrorist narrative, this false narrative that this is a war of religion”. He followed this by elaborating on the criminality and supposed secularism of Muslim terrorists:

“Those who adhere to this ideology are really irreligious criminals who use a perverted, what the President has called a wicked interpretation of religion, in an effort to recruit young, impressionable people to their cause, to foment hatred”.

In taking that stance, McMaster has broken with many members of his own staff, several of whom he was later to fire, and with the Trump administration itself. This desire to deny a connection between Islam and terrorism or to distinguish between a “pure” Islamic religion and “perversions” of it had been for many years a characteristic of the George W. Bush and Barack Obama administrations, as well as Hillary Clinton’s tweets, when “this has nothing to do with Islam” was an oft-repeated refrain. (Source: GatestoneInstitute.org)

Every American should be outraged by McMaster’s statements because the Islamic State is a serious threat to our national security. They are clearly Islamic and their Islamic faith is clearly the source of the problem because the Koran repeatedly calls for the murder of innocent people for the crime of rejecting Islam. It is not a peace loving religion and anyone claiming it is should not be trusted with our national security.

Instead of being outraged, millions of Americans agree with these lies without even investigating the facts because we have believed another lie, the message of tolerance, which claims we should not only tolerate the horrible crimes committed by Muslims, but also all sorts of immoral, perverted behavior, which is the true goal of the tolerance message. What they’re really saying is, “Don’t hold me accountable for my unrighteous deeds. Don’t shine the light of God on my darkness. Just embrace my perverted lifestyle and celebrate my sins.”

If the messengers of tolerance were truly concerned about tolerance, they would practice it consistently with everyone, but instead they only tolerate unrighteousness while refusing to tolerate righteousness, including anyone who acknowledges the one true and living God. Any other so-called god is fine with them, but not the God of our Lord Jesus Christ because He holds them accountable for their evil deeds by requiring them to repent and walk uprightly in His sight, which is the only way to eternal life. They find that intolerable.

America does not need more tolerance, we need more righteousness. By rejecting God, we have rejected the only light in this dark world. We have chosen to walk in darkness to hide our evil deeds (John 3:19-20). As a result, we are now stumbling in the darkness, doing crazy things like trusting our national security to a blind man. Unless we repent, it’s only a matter of time before we fall.

The ancient Chinese military strategy book, The Art of War, stresses the importance of knowing your enemy, but Americans are trusting their national security to a man who doesn’t even know who we’re fighting.

H.R. McMaster is just one example of a widespread chronic problem among all of our government leaders. When was the last time any of them publicly acknowledged our true enemy, which is not the Islamic State or the Russians or the Chinese or any other flesh and blood enemies. Our true battle is against the rulers of darkness in this world, the spiritual forces of wickedness who operate in the heavenly places. (Ephesians 6:12-13)

If our leaders believed that, they would be saying so, but they aren’t because they don’t. Instead, we have leaders like H.R. McMaster claiming the exact opposite, denying the spiritual nature of our battle, calling it a “false narrative that this is a war of religion.”

Americans want national security, but we also want to hold onto our unrighteous deeds. We cannot have it both ways. We cannot expect God to protect us while we refuse to follow His instructions or even mention His commandments publicly. It doesn’t work that way. May God have mercy on our nation.

Islam is thought of in terms of a religion when it is actually a GOVERNMENTAL system all of its own laws, lacking freedom and persecuting believers in Jesus Christ.

Great post and so relevant to the times we live in. Our government leaders as well as a big majority of the church doesn’t recognize our true enemy. May that be brought to light more and more so we will know how to walk victorious in these end times. God Bless.

Rumor is Mcmaster is on the way out. John Bolton likely next up to fill the spot. Definitely heard some anti-Israel pro Islam rhetoric coming from him McMaster, It was a bit disturbing.

Recall over a year ago I was led to share what the Lord had revealed…. that Trump is very strategic and a master 4D chess player. At that time some doubted. If you noticed most of the Goldman Sachs alum have left … Dina Powell, Steve Bannon and recently Gary Cohn. Cohn played an instrumental role in tax reform and deregulation. Trump has that victory in the bag and has now moved onto the next phase…which is more MAGA ( make America great again). No need for globalist Gary, who was checkmated with Tariffs. You noticed Rience Prebius and Sean Spicer are also gone. The Trump administration is being filled with MAGA patriots. This is a prophetic fulfillment of what was shared over a year ago.

I also heard several months ago that HR McMaster is gone. So I expect him to be replaced soon.
Please continue to keep Trump and his family in your prayers.

We can complain about the people Trump is appointing, but at some point we need to stop and open our eyes to Trump.

Trump is not what people think he is:
https://lighthascome.com/2018/03/02/donald-trump-and-americas-judgment-by-nathan-leal/

James, Thank you for reminding us that all men are in a spiritual battle. Paul spoke the Truth when he wrote to the church of Jesus Christ that “we do not wrestle against flesh and blood”. Only the Holy Spirit, in God’s timing, can reveal this revelation to a Christian. Yes, WE ARE CALLED TO “wrestle with principalities, against powers, against the rulers of the darkness of this age, against spiritual host of wickedness in heavenly places.” Only the Holy Spirit, in God’s timing, can reveal that “the weapons of our warfare are not carnal, but might through God for pulling down strongholds, casting down arguments and every high thing that exalts itself against the knowledge of God, bringing every thought into captivity to the obedience of Christ”. Only the Holy Spirit can grant us the ability to discern spirits and the strongholds we are called to war against. QUESTIONS: How many Christians actually believe these truths? How many Christians understand that we are called to be fully armed and engaged Spiritual Warriors 24/7/365? How many Christians are simply living on auto pilot or taking R&R, being totally disengaged from the battle we are called to? Every day we see the enemies of Christ increasing the intensity of their demonically motivated battle against Christ and our brothers and sisters. I BELIEVE that God has strategically placed thousands of Spiritual Warriors through out the Earth for such a day and time as this. MY PRAYER: May God give each of us strength through Christ to Stand in our full battle armor, being Watchful with Perseverance, praying in the Spirit for all the saints, and Not Become Weary or Discouraged. May Jesus set the captives of satan free from his deception and captivity. Father may your will be done here on earth… Read more »

Saw yesterday he is on his way out by May.

Yes & Amen James , I was not aware of H.R. McMaster’s point of view , I will be on the phone to both my Senators when their office opens this morning . Islam has never been at peace as I can prove in history and it is the one religion I can prove is false to any thinking person . It was designed as a warriors religion and has not changed from its conception . Blessings !

Honestly I was disappointed that Trump appointed him in the first place. Same with Wilbur Ross.

A little off subject- but still our national well being- I had a vision a couple of weeks ago of a mountain. Suddenly the mountain was split into smaller mountains. I asked God- when does this happen and He showed me a man sitting at a desk looking at pages of a document and signing them.
My visions are black and white, and usually dim. But, I felt the man was Trump.
Today on Rapture Ready News I saw his plan for Jerusalem is almost complete. He is dividing the land. When he does, I think our country will be torn apart.