You are here: Home » Prophecies » The Government Will Lay Siege to Homes and They Will Become Government Property
Share this post: 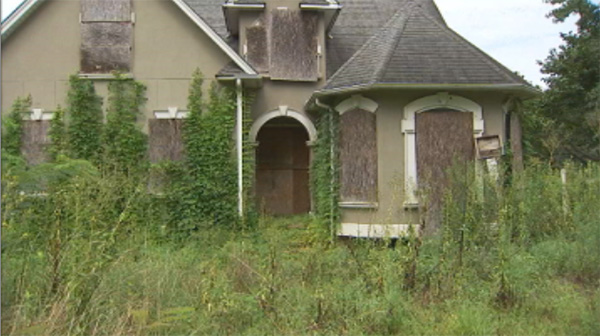 I dreamed I was walking along and the same man that always shows me things in dreams and visions came to me. He took me by my arm and asked me to come with him. I felt as though we were in a hurry.

We came to a housing unit and he knocked on the door. A young man opened the door, but he was in a hurry to go. He told the man that was with me, “I am sorry, but I cannot stay. I have to go.”

Then he went into his bedroom and came out with some things and left the house.

A little while after, I heard a woman screaming from outside. I ran to the door and looked down the hall. I saw men dressed in fatigues and black jumpsuits dragging a very old lady out of her house. She was fighting as hard as she could to hang on to the door jambs. She was kicking and screaming, but it didn’t matter. They just dragged her away.

I looked and saw the man that was with me, that brought me there, standing calmly, without alarm. I noticed he was wearing a long white robe above the ankle, just a simple garment. Even more, his calmness is what really stood out to me.

He saw the terrified look on my face, so he calmly said, “In the last days, there will be a severe food shortage. And the government will control the supply of food. In the beginning the people will be allowed to aquire food allotted to them. Then they will be told the food supply is running out.”

“Those that refuse to leave their homes will be hauled out just as you saw what happened to the old woman. The reason being is that there will be a law that will come into effect that will determine that if a home is deemed abandoned, then it instantly becomes government property. There is a law like it now. But it will become a new law based on new principles of new government.”

Executive Order 13603 can make us all slaves. https://www.youtube.com/watch?v=myfV_jcJABQ

Thanks for writing. I appreciate your looking out as a good brother. Just to let you know, I am definitely no push over and only shared that info because of the obvious, deliberate strangeness of it. I know the enemy does this. His biggest weapons are not what we think but only one master one that works and that is discrediting. I truly thank you Ed! Shalom!

Yes, I should have said “attempt to discredit”. The enemy did not succeed, from my viewpoint, and you are on guard. Good.

Joan, I listened to your aminutetomidnite interview and I notice you were not sure about that “Trump chosen two years ago” chatter from the secret service guy. I think the forces of darkness know exactly who you are, and they planted a story to discredit you. Do you remember the tribulation-now Johnnie Baptist interview of Benjamin Baruch several months ago, where he travels to a city to talk to two NASA scientists? Benjamin tells the truth and believes those guys, but my knowledge of science says the NASA guys planted a story to discredit Baruch, too. I ran some details by a scientist and he said NASA plants stories all the time, to muddy the water. I am just piecing this together suddenly. The pattern is unmistakable to me.

Here is the line of reasoning that led me to these conclusions. If I was a Democrat, I would be expressing sour grapes about Trump’s successful exposure of the vulnerablility of us, due to the immigration of criminals into USA. Nobody, before Trump, could make a dent into the Democrats’ open borders politics of decades. It is typical of Democrats to say, “deportation is going to cause a civil war, blah blah blah”, when really Trump is only saying send back the criminals, and cut off our enemies from entry. Let’s say the secret service guy is a sour grapes Democrat and his talk with you is then, not so special, and might be the forces of darkness planting a story in you, through him, which you are normally able to discern by the Holy Spirit, without him. You read no other prophecies to mess you up. However, you listen to him because he is in your work world. How else can the forces of darkness get to you? Maybe no other way. I offer food for thought. It is my intuition about it all. The enemy is crafty.

I thank You LORD,
I Will Praise Thee, O LORD Our Rock!
A Light Of Your Glory Has Shine forth,
Thy are Robe In Splendour Of Thy Majestic.

We delight ln Thy Abundance Mercy.
The SInful the days of Scourging will face anguish of soul
ln Your Wrath we are all Chastised,
Because of Our Uncleaness and Wickedness.

But LORD I will sing of Your abundant Mercies,
When You Judge, Who can withstand Thy Wrath,
You have Shown us Your tender Loving Kindness,
But men of Vanities will not Walk in Thy ways.

May Your Glorious Name Be Praised Forever.
May All Your Creation Proclaim You With Praise!
To All Who Walks in Thy Way,
Everlasting Peace.

My soul groans in lamentations,
lf man only knows what is about to befall them.
My heart is stricken with terror, my heart trembling,
When l hear of Thy coming Judgement.

In my dream there were soldiers of sorts…not dressed in the regular Army
or UN garb/uniforms…but you could tell that they were a Militia Type
group of men AND Women.
They were rushing around & shouting to each other to go to this house
or…go over to that one…so that THEY APPEARED to be NOT totally
“Organized” per se.
They went to everyone’s home or business “Pleading” with them to
“Please! ……..
“We are here to plead with you to please come with us…We have a Safe
Place all set up for you guys so you & your family & friends will be safe
from these things!!!”
The OTHER Saying/Statement that they were saying was…..
“Hey! Please…Quick! Come with us! We’re all heading for a Safe Place
where we’re all set up to handle keeping you guys all safe & protected
from whatever those things are!!! Please come with us & get everybody!!!”

When I asked them WHO they were…they sort of hesitated but said…
“We’re just a group of folks like you…wanting to get everyone to a Safe
Place…Away from here!”

Steve I have NEVER had such an Impendingly Urgent feeling from a dream
before this!

1-There will be groups of men and women coming frantically to each town &
neighborhood…somewhat organized NOT looking like a “Regular” Army
or Military squad from the government!!!

2-They will always REPEAT 2 Different but distinct Statements when
approaching the general public…Making it sound so Genuine…how could
folks Not agree to join them!

3- they don’t have an organized system of transportation…making it actually
looking like it was put together in a Real hurry!!!

Their 2 different statements were like BRANDED IN NEON On my mind…
so I would NOT forget what they were saying to everybody. BUT…Like I
also said…
the MOST CRUCIAL thing was that they were going to have
2 VERY ALIKE URGENT MESSAGES for people AND…
That they would NOT actually say upfront WHO they were OR
WHO they were “Representing OR WHERE They were FROM”!!!

This dream told me they were going to just very simply LOOK LIKE
a Good old boy neighbor that we should or could TRUST…..
And NOT Looking at all like a “Government Official/Military Group”!
It truly was
Pounded Into My Mind that It WAS CRUCIAL TO TELL EVERYBODY
This entire dream!!! KAREN Mar 14, 2015
Here’s a dream from last spring about people coming to our houses to “help” us. It would be good to instruct kids not to let anyone in, even if they look official and sound important.

Joanie,
I received this in 2014. Blessings to you and your ministry!
http://visionsfrommyshepherd.blogspot.com/2014/07/swat-team-surveillance.html

This is the pope’s call for people of different religions to unite. 2016 year of mercy? Well, inasmuch as God js merciful and draws many to salvation in Christ.

Mark B
Reply to  Eduardo

Wow, that gave me the creeps. Truly he is the false prophet. Thanks for pointing that out.

Guys please read this..if true its a confirmation of what many of you have been sharing. In a related article Pope Francis has been calling for people to unite under the banner of love. Wow. God bless and may God be glorified. I pray He will strengthen us for whatever lies ahead.

Wow Tom, that is some heavy stuff! The good news is the Lord loves and is sounding the alarm for you that something is not right here. Scripture reminds us He always provide a way out and that He will not give us anything we can’t handle. Please take comfort in his promises. As to where to go, I would view this video (read the comments in vid also) as it is talking about what you fear and I would get in touch with drpatricia.com. http://youtu.be/HyCKi48Q3tM.
Peace to you.

I would like to share 3 dreams that I have received over the past few weeks. Briefly and in order:
1) My family which totals five, (husband, wife, son and two daughters) were standing with Jesus and He said its time to go. Myself, son and middle daughter were turning to walk away when my youngest daughter hesitated and looked back at her mom. My wife said to Jesus, “I don’t know who you are”, as to which He replied, “I don’t recognize you either.” Jesus then reached down and took hold of my youngest daughters’ hand and we all turned and walked away from my wife. End of dream.
2) I was speaking with my wife and she began attacking me verbally and I started rebuking her in Jesus’ name recognizing it wasn’t her speaking. Then her countenance changed even more evil and she started screaming at me in a male demonic voice as to which I maintained my rebuke by the blood and name of Jesus. End of dream.
3) Several times and in several different rooms, my wife was trying to place a poisonous spider very close to me. End of dream.
I know these don’t pertain specifically to the posters’ dream, but can anyone help me with mine? Would someone suggest where to go to help me? I have been in deep prayer with God for several months now as He’s been drawing me much closer to Himself and I’ve certainly prayed and asked Him to help me understand these dreams. Please also note that I haven’t experienced dreams like this ever before.

PS: Thank you moderator for the assist.