You are here: Home » Prophecies » Gorsuch Will Not Shift The Balance Of Power On The Supreme Court As Much As You May Think 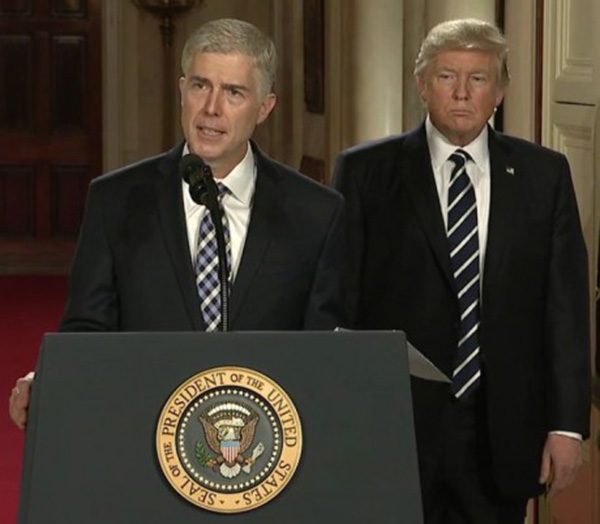 On Tuesday, President Trump announced that he would nominate Neil Gorsuch to fill the open seat on the U.S. Supreme Court.  Gorsuch currently serves on the 10th U.S. Circuit Court of Appeals in Denver, and he was confirmed unanimously by the Senate when he was appointed to that position by President George W. Bush in 2006.  Gorsuch appears to have some strong similarities to Antonin Scalia, and many conservatives are hoping that when Gorsuch fills Scalia’s seat that it will represent a shift in the balance of power on the Supreme Court.  Because for almost a year, the court has been operating with only eight justices.  Four of them were nominated by Republican presidents and four of them were nominated by Democrats, and so many Republicans are anticipating that there will now be a Supreme Court majority for conservatives.

Unfortunately, things are not that simple, because a couple of the “conservative” justices are not actually very conservative at all.

For example, it is important to remember that Scalia was still on the court when the Supreme Court decision that forced all 50 states to legalize gay marriage was decided.  Justice Anthony Kennedy joined the four liberal justices in a majority opinion that Scalia harshly criticized.  So with Gorsuch on the court, that case would still have been decided the exact same way.

And let us also remember that Scalia was still on the court when the big Obamacare case was decided.  Chief Justice John Roberts joined the four liberal justices in a decision that was perhaps one of the most bizarre in the modern history of the U.S. Supreme Court.

For some reason, Justice Roberts was determined to preserve Obamacare, and if you read what he wrote it is some of the most twisted legal reasoning that I have ever come across.

As someone that was once part of the legal world, let me let you in on a little secret.  Most judges simply do whatever they feel like doing, and then they try to find a way to justify their decisions.  So if you ever find yourself in court, you should pray that you will get a judge that is sympathetic to your cause.

Fortunately, Gorsuch appears to be one of the rare breed of judges that actually cares what the U.S. Constitution and our laws have to say.  In that respect, he is very much like Scalia…

Gorsuch is seen by analysts as a jurist similar to Scalia, who died on Feb. 13, 2016. Scalia, praised by Gorsuch as “a lion of the law,” was known not only for his hard-line conservatism but for interpreting the U.S. Constitution based on what he considered its original meaning, and laws as written by legislators. Like Scalia, Gorsuch is known for sharp writing skills.

“It is the role of judges to apply, not alter, the work of the people’s representatives,” Gorsuch said on Tuesday at the White House event announcing the nomination in remarks that echoed Scalia’s views.

One of the most high profile cases that Gorsuch was involved with came in 2013.  That was the famous “Hobby Lobby case”, and it represented a key turning point in the fight for religious freedom.  The following comes from CNN…

In 2013, he joined in an opinion by the full Court of Appeals holding that federal law prohibited the Department of Health and Human Services from requiring closely-held, for-profit secular corporations to provide contraceptive coverage as part of their employer-sponsored health insurance plans.

And although a narrowly divided 5-4 Supreme Court would endorse that view (and affirm the 10th Circuit) the following year, Gorsuch wrote that he would have gone even further, and allowed not just the corporations, but the individual owners, to challenge the mandate.

Donald Trump said that he wanted a conservative judge in the mold of Scalia, but I think that he was also looking for someone that he could get through the Senate.

And considering the fact that Gorsuch was confirmed unanimously by the Senate in 2006 will make it quite difficult for Democrats to block him now.  Gorsuch has tremendous academic and professional credentials, and he will probably have a smoother road to confirmation than someone like appeals court judge William Pryor would…

Trump may have favored Gorsuch for the job in hopes of a smoother confirmation process than for other potential candidates such as appeals court judge William Pryor, who has called the 1973 Supreme Court ruling legalizing abortion “the worst abomination of constitutional law in our history.”

But Pryor is still reportedly on the short list for the next spot on the Supreme Court that opens up, and by then the rancor in the Senate may have died down.

If Gorsuch is confirmed, what will this mean for some of the most important moral issues of our time?

As for abortion, even if Gorsuch is confirmed I do not believe that the votes are there to overturn Roe v. Wade.  But if Trump is able to nominate a couple more Supreme Court justices that could change.

But even if Roe v. Wade is overturned, it would not suddenly make abortion illegal.  Instead, all 50 states would then be free to make their own laws regarding abortion, and a solid majority of the states would continue to keep it legal.

The analysis is similar when we look at gay marriage.  If the Supreme Court decision legalizing gay marriage in all 50 states was overturned, each state would get to decide whether gay marriage should be legal or not for their own citizens.  And just like with abortion, it is likely that only a limited number of states would end up banning gay marriage.

So the nomination of Neil Gorsuch to the Supreme Court appears to be a positive step, but it does not mean that we are going to see dramatic change when it comes to issues such as abortion or gay marriage any time soon.

But at least Gorsuch can help stop the relentless march of the progressive agenda through our court system.  So in the end we may not make that much progress for right now, but at least the liberals won’t either.

One thing we keep in mind is our President Donald Trump and Supreme court Judge Neil Gorsuch are NOT called for office of Apostles or Prophets or Pastors. So dont look for qualities mentioned in 1 Timothy 3 chapter. They are called for office of Rulers and Judges. They all judged either good or bad by how much they favored God’ people and helped God’s people to live Godly. So please dont judge them for hot having right doctrine or super duper righteousness. We suffered (suffocated) like anything for past 8 years. As I work for Government I know.. I am not saying everything Trump is going to be make perfect and beautiful. At least we all can little bit breath …

Thank you for saying this so well and having the clarity and discernment to know the difference of mandate of public leaders/rulers and ministry leadership. We need to do as the word say and just keep praying in all areas for righteous justice as God sees fit and not our way for His ways are higher and better.

Trump said in his 60 minutes interview that the gay marriage issue is settled and he is fine with that. You cannot support gay marriage and call yourself a Christian. Please show me in the Bible where God condones gay marriage.

Many in key positions, who would otherwise take a stand for good, have been caught, entrapped or enticed into wrongdoing and are being extorted to act against their beliefs and consciences. We should pray for them as well

Don’t worry… Roe v Wade will soon be history. A big shift in the Supreme Court is coming.

Phanuel, no one can say that. Have the end times been cancelled? Should we tear out the Book of Revelations from our Bibles? Has the Devil gone on vacation? Has the $1 1/2 quadrillion debt been paid? Has someone tamed the North Koreans? Iran? Has Soros seen the like and become a conservative? The Rothschilds? We have a reprieve that can end anytime God wants it to. Four respectable prophets have said Israel will be attacked this year. Relax and enjoy the world at your own risk. I’m still looking for the Blessed Hope. GB.

“Most judges simply do whatever they feel like doing, and then they will try to find a way to justify their decisions.” <– This was my biggest surprise in my first year of law school. Reading their decisions, it's so obvious only Pollyanna could miss it, and that's only a maybe.

Here in Canada there is a term called ” Judge Shopping”. Lawyers pick a judge who will perhaps be sympathetic (or bribeable) to their cause. I have seen 2 judges LIE in their own courtroom. Another reason judgement is coming (Nita Johnson, “Prepare for the Winds of Change II”) unrighteous judgements in the courts.

Thank you for your well written article Michael

It’s amazing how some are seemingly able to give president Trump a free pass, yet former president Obama was vilified for some of the same sins. Yes we must as saints of God represent Jesus Christ in the utmost ( love, humility, forgiveness etc .). But whether one is republican, democratic, independent or they choose never to vote. It’s way beyond political parties ( which both parties are ruled by the powers that be of the world for the season God permits ). Leaders still should have a degree of high moral standing and not compromise to appease man or their own polluted appetites. It appears some of the saints are throwing caution to the wind out of sheer desperation just to taste and/or cling to the fleshly morsals of this world a little while longer. We all want things to go well, but prophecy/God’s infallible word must and will come to pass. Our Lord and Savior will come at His appointed time. Therefore it is a must to go through fiery trials, as well as awesome miracles. Where our treasure is our hearts are as well. Trump has compromised on gay marriage. Saints know it’s an abomination unto God. Even nature dictates ( our anatomy ) that marriage is between male and female. These last days are perilous…therefore saints can’t afford to sleep at life’s wheel. We need Jesus/Yeshua all the more during these times. God had revealed much regarding the Illuminati/shadow government to pray constantly, pray & praise harder while we are wise as serpents and gentle as doves. I speak to myself as well. I pray dear saints that you all take this in love. I pray that we all be humble and faithful before the Lord so we needn’t be ashamed at the judgment seat of… Read more »