You are here: Home » Church » Remnant » God is Restoring Some Things Back to the Church in 2017 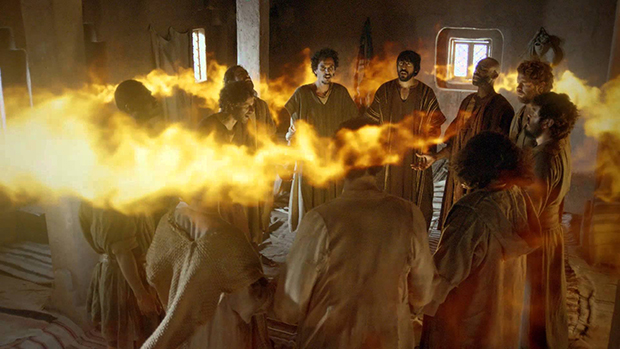 Forty years ago in 1977, the late prophet Bob Jones had an encounter with the Lord in which he was told, “In forty years I am going to restore some things back to the church.”

Forty years later is 2017, which means God is going to restore some things back to the church starting this year. I had not heard this word before, so it is great to hear it now when the fulfillment is upon us and skip the long waiting process.

Announcing something forty years in advance means it must be significant, but God did not tell Bob Jones the details on what was being restored.

Paul Keith Davis, founder of White Dove Ministries, was a close personal friend of Bob Jones. He shared this testimony at the 16:45 mark of the 21-minute video shown at the bottom of this post. He then shared the following explanation of what he believes it means.

“This is what I will say with a very large degree of confidence, we are in a new season. We are coming out of this transition and we are coming into a fresh expression and I do believe there are realms of glory that are going to be revealed. More importantly, as I have said often, I believe we are about to have a revival of truth. The spirit of truth has always been here, but there are times of manifested expressions of power and glory and anointing and the miraculous to manifest truth.

God says something and then He puts an exclamation mark on it with the validation of His spirit, of His power, of His anointing, of the miraculous. I believe that’s where we are. I believe God is about to say some things. And it is going to be a preparation of the bride of Christ, that’s what we’ve been prophesying for years now.

I just offer this to you as an encouragement. I wish I could tell you exactly what the Lord is about to do and when, but I don’t know. But I do know we are in an important season and it is time to posture ourselves before God, value the things he has done, honor the things he has done, posturing ourselves for what he is about to do, positioning ourselves in prayer, getting stuff out of the way, letting the Holy Spirit extract anything in us that might stand in the way, so we can stand before the Lord with confidence and we would not shrink away in shame add his presence because he is about to manifest himself and my admonition, my encouragement, is to be ready, just to be expectant and to be ready. We are on the eve of Pentecost. On the very first Pentecost, the lord said sanctify yourself today and tomorrow, for on the third day I am going to appear, and boy did he! He came in glory and power and manifestation and coals of fire and lightnings and a trumpet sound and the earth rumbled and trembled and the heavens dripped dew and God came down on Mount Sinai. (Exodus 19:10-19)

The Lord told me one time, ‘I did that to impress My people because they were about to have to cross over into a land filled with giants.’

The intent was for them to be so impressed with God that they didn’t even see the giants. I feel like that’s a lot of the truth today. God is going to impress us. And He can do it. I’m talking about manifestations of His glory and power that will be so impressive that our faith transitions over into a supernatural dimension. So, I release that to you and I pray this little story is an encouragement to you in the name of Jesus Christ.”

When I heard this word, I wondered what it might be that God was restoring. I agree with what Paul Keith Davis said about a release of greater power and anointing because there are many prophecies that must be fulfilled, including Isaiah 60:2, Joel 2:1-11, Psalm 149:5-9, and Obadiah 1:21.

Another thing that has been lost and needs to be restored is the fear of the Lord, like when Ananias and his wife Sapphira lied to the Holy Spirit and both dropped dead (Acts 5:1-10). That kind of fear of God sounds strange to our generation because so much emphasis has been put on the grace of God, even to the point of believing anything we do is automatically okay and forgiven, but that just shows how far off course we have strayed.

Another thing that must be restored before the Lord returns is the wealth of the nations must be transferred to the righteous to fulfill prophecies like Isaiah 60:5 and Haggai 2:6-9.

When ancient Israel obeyed God in the days of King Solomon, He caused them to prosper so much, silver was not considered valuable because they had so much pure gold (1 Kings 10:21). Those days are coming back before the Lord returns. It will be one of many ways God will reveal his glory to the unrighteous.

I believe this word given to Bob Jones shows the significance of what is happening today. Major changes are coming. Ancient prophecies must be fulfilled. The time of the Lord’s return is drawing near. We have finally reached the end of a long season and a new season is now beginning.

There are so many prophecies that must be fulfilled in a relatively short time, so it’s exciting to hear another confirmation that these things are upon us now. It’s going to be fascinating to see how it all comes together. What a privilege to be part of God’s end-time righteous remnant!

“To be so impressed with God that I do not even see the giants” What a confirmation to the journey he has me on!

Thank you James. My mind often comes to the appreciation of the year 2017 as the 500th anniversary of the beginning of the Lutheran reformation – it also falls in a Jubilee year – year 5777 I believe. I suspect as we look back on this year that we will have a better understanding of what has been birthed in it (certainly my family has moved forward by leaps and bounds in the supernatural this year). The last two Jubilees have been rather significant prophetically for Israel with the Balfour Declaration and the Six Days War. More to come no doubt!

Dear James: The change of seasons is from Pentecost to Tabernacles. Many are just realizing the change has occurred. Tabernacles is also known as Succoth, the booths in the harvest fields. It is a three-part feast: Trumpets, a call to worship & war, which can be the same word in Hebrew; The Day of Atonement, which can be broken into At-One-Ment, which is the coming together of the Bridegroom & the Bride; & The Ingathering, which is the Lord delivering the children of true Israel to His faithful wife. This is the billion ‘babies’ that Bob Jones foresaw and the uncountable number before the throne of God in Revelation. God bless you.

This is the link to the book, Angels On Assignment which describes the angelic encounters of Pastor Raymond Buck. Truly life changing.
http://www.angelsonassignment.org/

I read this years ago. It is truly a book that reminds you how much in control our Heavenly Father is and how much He loves us!!!!

Great word James. Sounds like a confirmation of the other one you posted recently about how this year will be the year the church turns around on the runway and gets ready for takeoff. I think the start of the great collapse this fall that Rachel Baxter prophesied will cause the church to do an about face similar to what happened after 9/11, but probably more serious and definitely ever increasingly so as the birth pains intensify and the contractions become closer together before Christ returns.

Kentucky Governor makes a call to prayer and then calls out the media and false brethren on their response.

Thank you for the encouraging message James!
BTW my holyspiritwind@gmail.com email address is still being block for some reason.