You are here: Home » Church » God is Our Covering On This Day of Yom Kippur
Share this post: 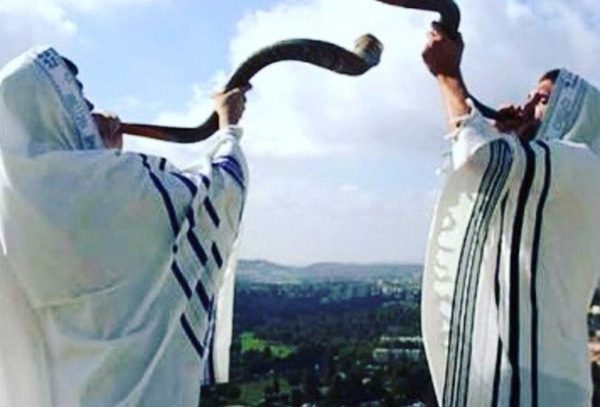 I had a vision in the early evening. I saw people decorating with a very long garland. It seemed strange to be putting up Christmas style decorations during this appointed time (Yom Kippur).

Then I fell asleep and had a very unusual dream. I was visiting in the house of a very rich person. The house was huge with many large rooms for meeting and event to assemble crowds. President Obama was in the house and my wife and I were the only ones present.

I talked with him for a short while about meaningless things. Then he quit talking and started walking around the house looking into the various rooms. He did not respond when I called out to him.

As I looked around to assess the situation, I realized the place where we were staying was like a huge luxury apartment in a larger building. As I looked into other sections of the building, people were decorating for Christmas with very strange materials. One place several women were decorating a place with paper dividers and real branches from pine trees. They seemed to be preparing for some type of Christmas pageant.

In another place I saw simple but elegant decorations for a family. As I looked around the apartment, I saw the only security officer for the people who lived in this place was putting on a winter coat and preparing to leave for the day.

I asked him if anyone else was there for security and he told me that he was the only one. I asked him, “You mean with the president of the United States here there are no security personnel at all?”

He was very surprised to learn the president was in the building and began to wonder if he should stay. I assured him I couldn’t cover the president alone. I even told him that I was not armed and needed his help to provide security.

Then I woke up and was very cold from head to toe. My wife was reading and said the room was hot, but I was freezing. I think this was a prophetic dream about the leadership of America being uncovered right now spiritually. People were doing things out of season and in strange ways. No one was concerned about the welfare of the president or about what was happening in this season. It felt like the fire of the nation had gone out.

I remembered I was praying in repentance for the nation before my short nap and dream. The intercessors are the true secret service agents of the nation and many have stopped praying for the leadership to be protected and covered. This must change because we are all very vulnerable now. The leaders are wandering around, looking around, and prying into areas which belong to others. In my dream, no one seemed to be doing what was right and necessary in the moment.

The enemy is plotting: “You will say, ‘I will invade a land of unwalled villages; I will attack a peaceful and unsuspecting people—all of them living without walls and without gates and bars.’” (Ezekiel 38:11)

We need the sons of Issachar to wake up in this hour.

“…of the sons of Issachar who had understanding of the times, to know what Israel ought to do,” (1 Chronicles 12:32)

All night I had very vivid dreams of being with people I had never seen before, but I knew them in the Spirit. It was as if we had been friends for many years and yet we were meeting for the first time. We all had a common purpose and were working smoothly together to accomplish what the Lord had called us to do. We were driving huge trucks and big buses on our way to pick up people and carry them to a place of refuge.

“My soul, wait silently for God alone, for my expectation is from Him. He only is my rock and my salvation; He is my defense; I shall not be moved. In God is my salvation and my glory; The rock of my strength, and my refuge, is in God. Trust in Him at all times, you people; Pour out your heart before Him; God is a refuge for us.” (Psalm 62:5-8)

God is our covering and on this day (Yom Kippur) we celebrate that He covers us with grace and covers our sin to remember it no more. The word Kippur comes from the Hebrew word “Kaphar” which means “covering.”

When we finally arrived at our destination, and it was beautiful. Everyone lived under the cover of huge trees filled with leaves. There were facilities for people to eat, sleep and have recreation. I thought about Revelation 12:6, “The woman fled into the desert to a place prepared for her by God, where she might be taken care of for 1,260 days.”

A place has been prepared for Israel and the Bride of Christ and we will be spared from the wrath of the beast.

“Then I heard a loud voice in heaven say: ‘Now have come the salvation and the power and the kingdom of our God, and the authority of his Christ. For the accuser of our brothers, who accuses them before our God day and night, has been hurled down. They overcame him by the blood of the Lamb and by the word of their testimony; they did not love their lives so much as to shrink from death. Therefore rejoice, you heavens and you who dwell in them! But woe to the earth and the sea, because the devil has gone down to you! He is filled with fury, because he knows that his time is short.’” (Revelation 12:10-12)

“Then the dragon was enraged at the woman and went off to make war against the rest of her offspring—those who obey God’s commandments and hold to the testimony of Jesus.” (Revelation 12:17)

Yom Kippur Word from the Lord:

This morning dark clouds covered Jerusalem; some were black, others were gray. Some were even red this morning. But the light of the sun (Son) was coming through anyway. The light somehow came in under the clouds and flooded the city with the light of His Glory. The whole city lit up with bright light and the Holy Spirit led me to think about this promise:

“Arise, shine: for your light has come! And the glory of the Lord is risen upon you. For behold, the darkness shall cover the earth, and deep darkness the people; but the Lord will arise over you, and His glory will be seen upon you. The Gentiles shall come to your light, and kings to the brightness of your rising. His glory will penetrate every cloud of darkness and bring His light to us!” (Isaiah 60:1-30)

His glory will penetrate every cloud of darkness and bring His light to those who belong to Him! What is your darkness like in this season? Are you ill? Are you infirm? Are you under heavy clouds of debt or financial lack? Let the light of His glory and His grace penetrate the darkness and set you free to prosper and be in divine health!

This is the day of salvation and this is the time of your visitation. Don’t let negative thoughts (clouds of darkness) rob you of your visitation! Let everything which hinders go and keep your eyes fixed on Yeshua ha Messiach, the author and finisher of your faith! We ask and receive by faith in the mighty name of Yeshua! Amen and Amen!