You are here: Home » News » Financial News » Why a Full-Blown Banking Crisis Is Inevitable 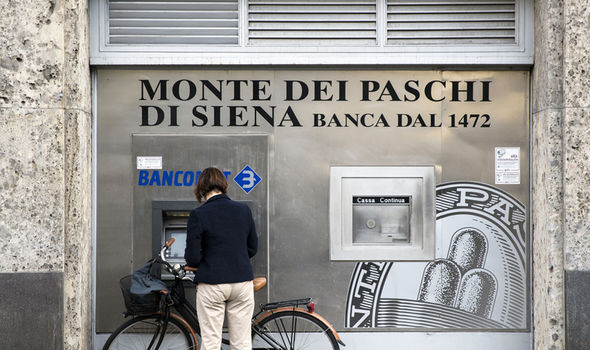 Italy is on the verge of a massive banking crisis.

You’ve probably heard that Italian banks are in serious trouble. They’re sitting on more than €360 billion worth of non-performing loans (NPL). These are loans where the borrower has stopped paying.

According to Bloomberg, the NPL ratio for five of Italy’s biggest banks is more than double that of the average European bank.

UniCredit, Italy’s biggest bank, is down more than 45%. Banco Popolare, another major Italian bank, is down 74%. Banca Monte dei Paschi di Siena, Italy’s third biggest bank (and the oldest surviving bank in the world), has plunged 87%.

This is a serious red flag. After all, we’re talking about the cornerstones of Italy’s banking system. And, right now, these stocks are trading like a banking crisis is around the corner.

In fact, that crisis may have just begun…

• On Monday, Italy’s government said it’s going to bail out its troubled banks…

A “bailout” is when a government injects money into its banking system to keep it from collapsing. If the term sounds familiar, it’s because the U.S. government bailed out several “too big to fail” banks during the 2008 financial crisis.

The Financial Times shared the details of the bailout yesterday:

The Italian government has asked parliament to authorise up to €20bn to prop up the country’s most fragile banks, as it prepares to mount a possible state rescue of Monte dei Paschi di Siena, its third-largest lender, by the end of the week.

About 35% of its loans are non-performing. It has about five times as many bad loans as the average European bank.

This morning, the bank warned that it could run out of cash within four months. Previously, representatives of the bank said it had enough cash to last 11 months.

Monte dei Paschi is running out of time. And a bailout looks like the only thing that can keep it from failing. There’s just one problem… (continue reading)

Doug Casey has established residency in nearly a dozen countries, visited 175 nations, and has been a major investor in businesses around the world. He has participated in several televised debates with Presidential candidates and served as an economic advisor to the leaders of six countries. He’s been a regular guest on national television when people want to know what’s going on in the global financial markets—including spots on CNN, Merv Griffin, Charlie Rose, Regis Philbin, and NBC News. Phil Donahue even devoted an entire show to his work.

Update: I finally got all my checks from various retirement accounts and will be going in the morning to deposit into my self directed profit sharing plan. Unfortunately my entire teacher retirement is tied to the stock market but that is out of my control. This has been a long and tedious process because 95% of people are unfamiliar with this type of setup but it doesn’t stop them from giving you their advice 🤔

Anyway been very sick finally feeling better, maybe be acquiring a food truck tomorrow to help feed the poor in the name of Christ. Been sick and Busy. God Bless you all and stay safe.

Here’s an article showing the timeline and actions taken during the Cyprus banking crisis. I thought it was helpful to know what we could expect if a banking crisis unfolds in the US in the future.
http://gainspainscapital.com/2015/10/28/cyprus-style-bail-ins-and-frozen-accounts-are-coming-to-a-country-near-you/

Looks like Monte dei Paschi got a $20 Billion bailout:
http://www.cbsnews.com/news/italys-3rd-largest-bank-gets-20-billion-bailout/

Deutsche Bank has received twice as much in bailouts as Lehman Brother’s did:
According to the Government Accountability Office (GAO), Deutsche Bank received cumulative loans totaling $77 billion under the Federal Reserve’s Primary Dealer Credit Facility (PDCF) and $277 billion in cumulative loans under the Term Securities Lending Facility (TSLF) for a total of $354 billion. Lehman Brothers received only $183 billion in Fed emergency lending programs according to the GAO report.
http://wallstreetonparade.com/2016/10/germanys-deutsche-bank-again-in-trouble-received-a-u-s-bailout-twice-as-big-as-lehman-brothers/

And Wow, take a look at all these Bailout recipients:
https://projects.propublica.org/bailout/list

They are running out of fingers to plug all the holes in the dam, it’s just a matter of time before these banks collapse, and then the dominos start falling.

I was bearish on Gold & Silver since last 2 months. But it seems the trend is changing now for medium term at least. I am getting into to “buy” trade today onward. Not sure if James or someone else has any dream or opinion on medium term trend change?
Thank You, God bless James and All!
bhav

I have seen prices lower than the current market prices, but have also seen several visions, which I have interpreted as moves up. I have not seen any dates, so I can only speculate about which comes first. My guess is a small move up, followed by a bigger move down, followed by a much bigger move up.

Is anyone shorting the Euro at the moment? What ETF or trade device are you using?

When do you think financial collapse will hit us?

There is a specific prophecy regarding Italy’s economy being the first of many dominoes… does any one recall that prophecy?

Rachel, I do remember reading that somewhere, and I also remember a prophecy by the late David Wilkerson that it would start in Europe, I think he said Germany. If I remember correctly, he also said there would be bank runs in the United States within about 2 weeks after the first country goes bankrupt.