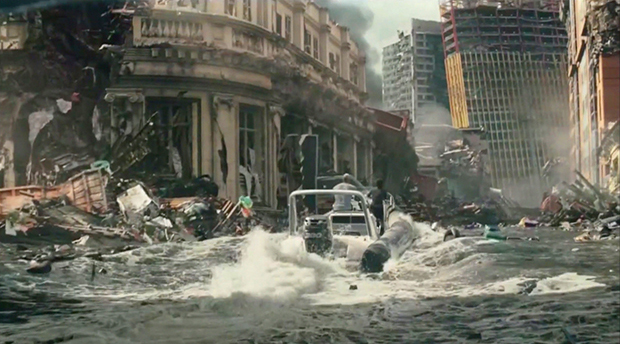 Just four days ago on July 8, Julie Whedbee posted a dire warning she received from God, “My Arm of Protection is Now Lifting – This is the Beginning of Sorrows”. Today, news headlines from around the world are reporting lives lost and property destroyed by floods. In some cases, the amount of rainfall and flood waters are breaking all previous records.

In southern Japan, unprecedented rain, thirty inches in nine hours, has killed 25 people and many more are missing as of July 11. (Source: Thestar.com)

In Lagos Nigeria, one of Africa’s largest cities with a population of 15 million, torrential rains flooded many parts of the city on July 10, bringing crocodiles swimming through the flooded streets. (Source: CNN)

In Paris France, flooding on July 10 broke their previous record, set in 1880, with two to three inches of rain per hour from a slow-moving storm that allowed rain to keep pouring down. Authorities were forced to close twenty metro stations. (Source: BBC)

In China, 1.2 million people were forced to evacuate their homes and more than fifty were killed by flooding caused by heavy rains during the first week of July. (Source: Aljazeera.com)

In India, 42 people were killed by floods and resulting landslides during the past week. Many people were rendered homeless and unable to access drinkable water. (Source: telegraphindia.com)

In Switzerland, heavy rains and flooding are rare, but this past weekend, July 8-9, they were hit hard by torrential rain, thunderstorms and flash flooding, especially in towns and villages of northwest, central and eastern Switzerland. (Source: Swissinfo.ch)

In Sri Lanka, 200 people were killed and over 600,000 were displaced by devastating floods last month. The floods and resulting mudslides have destroyed lands used for tea farming along with almost 300 tons of tea leaves. (Source: aljazeera.com)

In Quebec Canada, 2,688 citizens had to be evacuated from 78 communities due to flooding this spring. (Source: CTVnews.ca)

In Peru, 115,000 homes were destroyed by spring floods caused by heavy rains in January, killing 113 people and leaving 178,000 homeless. 1,500 miles of roads were destroyed. (Source: thenationalstudent.com)

Are all these floods just a coincidence or is it the beginning of sorrows? Time will tell, but Julie Whedbee’s prophetic warning sounds more ominous today than it did just a few days ago.

God promised Noah he would never again cut off all flesh by flood waters:

11 I establish My covenant with you; and all flesh shall never again be cut off by the water of the flood, neither shall there again be a flood to destroy the earth.”
12 God said, “This is the sign of the covenant which I am making between Me and you and every living creature that is with you, for all successive generations;
13 I set My bow in the cloud, and it shall be for a sign of a covenant between Me and the earth. (Genesis 9:11-12)

So we have this assurance that all flesh and the whole earth will not be destroyed by floods, but that does not rule out the possibility of destruction in some areas, or many other kinds of destruction coming upon the earth.

About 2,500 years ago, the prophet Daniel received a warning from the angel Gabriel regarding a time of unprecedented trouble coming prior to the return of the Lord. Gabriel said, “There will be a time of distress such as never occurred since there was a nation until that time; and at that time your people, everyone who is found written in the book, will be rescued.” (Daniel 12:1)

The Lord Jesus warned about this time, describing it as birth pangs, which come with increasing frequency and greater intensity as the time of delivery approaches. (Matthew 24:8) Ultimately, these same birth pangs will usher the world into a time of great pressure, called the great tribulation.

If the birth pangs have started, we would expect to see events like these floods, along with many other kinds of trouble, including false prophets, wars, rumors of wars, famines, and earthquakes. I believe these floods are not a coincidence, but another sign of the times, a confirmation to those who are awake and alert, letting them know it won’t be long now before the Lord returns to rescue His people, just as Gabriel promised.

I live in central British Columbia, Canada and we have just gone through major flooding in our area. Our lake level is just now approaching the normal for this time of year. NOW… we have Major forest fires burning out small towns with thousands of residents being forced to evacuate their homes. Never have we had floods and fires like this and the change from floods to fire has been within weeks. For those with eyes to see the Lord is telling us something….

Have been praying for BC. We are moving to NW BC in August.

Wow! 😳 I had no idea of the severity, destruction, death & displacement of the flooding! 😢

I just finished watching a video where this Scripture was referenced – “”When the Enemy comes in like a flood, the Spirit of God will raise a standard against him!” (Isaiah 59:19)

Sadly, geo-engineering & weather warfare have been around since the 1960s. You can find documents on the Internet discussing these efforts. Although some people may believe this is God and it could be, I believe the majority of this is caused by Satan’s minions to wreck havoc & destruction & trauma on people while destroying their property & forcing them off their land which they will then be unable to “rebuild” on. This has been happening for years in CA. UN Agenda 2030 coupled with depopulation. Evil, power-hungry people. They also enjoy causing massive stress & damage to these area’s ecosystems which aids in the animal die-offs so they can take control of the food & water & move closer to implementation of the Mark of the Beast System.

Donning God’s Armor needs to be the first thing we do each morning. We are living in disturbing times & I expect it will get even crazier in the coming 2 – 10 weeks…..

On July 2, Jim Kermott posted a word from the Lord here on Z3 which included the following:“Speak no longer of ‘weather wars’; for man’s machines have no effect, save that I permit it. And who is to say that man’s machines have done these things — caused floods and droughts?
….
Yet, you continue to harden your hearts. You continue to give glory to your enemies, who could do nothing to hurt you except that I permit it — and you do so [give glory to your enemies] that you might feel hate. (Hatred is NOT a fruit of My Spirit!) Yet, you know – but will not admit – that all these evils, and more, and others yet to come, I permit to come against you that you would finally return to Me.

Have never heard of Jim Kermott but I feel no hatred in my heart nor understand how recognizing weather manipulation & geo-engineering being done results in “hatred” in one’s heart. I recognize this solely as a further “power grab”/control by the ones who wish to rule over the masses.

I am acutely aware that we are living in the final days of Satan’s rule. God can suppress The Elite’s geo-engineering/weather warfare WHENEVER & HOWEVER He chooses but as part of God’s judgment, He is allowing it & thus allowing the Elite’s to further their agendas of depopulation, chaos & moving people into “pack & stack” housing in regional areas so the majority of most nation’s lands can be designated “protected” & reserved for The Elites’ plans (UN Agenda 2030).

One can have an unwavering faith while still being very observant & aware of the events impacting our lives.

These two preachers regularly show video footage of what is happening in the world confirming what James has said. They have several recent videos showing massive flooding happening all over the world.
https://www.youtube.com/user/TheTwoPreachers/videos

All of this flooding can’t just be a coincidence. I heard the words,”Judgement is set. It is time to call the people to weep and mourn,” just this last week.

Thanks Julie for the Scripture References on how to war at a whole new level. This article was an eye opener, because I never noticed what was happening recently with floods around the world.

Glynda article is a great warning on how we should look and discern what is happening around us. James, thanks for posting the Scriptures in KJV because I prefer to remembering them that way.

Personally, I believe some of this warring will be concerning the weather. We need to begin using the authority that Jesus gives us to speak to the weather and command it, especially as we move into this time of more extremes in our natural environment.

Last night we had the strangest storm in WI. The thunder rumbled for more than a half an hour straight. At the same time the lightening was like a strobe light flashing every other second! I am almost 60 and don’t ever remember a storm like this.

I recall a show on the History Channel that “explained” the ten plagues of Egypt, how one plague could have caused the next plague to happen. Much–but not all–of it made sense, and I could see how God might orchestrate events to work in order that way. So now I am wondering if all this flooding will cause the next prophetic event, such as disease, or even an overabundance of mosquitoes which could lead to chemical spraying that causes sickness. Just a thought.

The first headline I saw this today was a report of severe flooding in “Chicagoland” when I checked my weather this morning.

Wow, this is amazing when I read this article it brought me back to a vision the Lord showed me on 10.25.16. The image was of cars bobbing in raging flood waters. We are certainly approaching Matthew 24:8…

James, I don’t recall who gave a word not too long ago that God was going to judge every nations that participated in the vote against Israel at the United Nations in January 2017 …but the word was that God would judge these nations with floods and a serious pandemic skin disease.