You are here: Home » Trading » Forex » Five reasons why I believe the US dollar index will soon be surging. 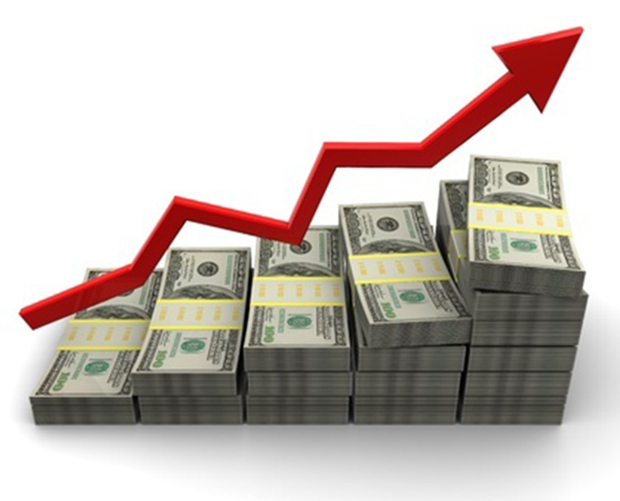 2017 has not been a good year so far for the US dollar, but I am expecting that to change soon.

At the start of 2017, the dollar index was at 1.03. Since then, it has steadily dropped, reaching a low of .948 yesterday. One of the main reasons for the drop was the steady rise in the euro (the dollar index measures the value of the dollar relative to six other major currencies, including the euro). After starting 2017 almost at parity with the dollar, the euro rose to almost 1.15 yesterday, a 52-week high.

However, the bigger picture tells a much different story. Back in 2013 and early 2014, the euro was trading much higher, reaching 1.40 in May 2014. Then the bleeding started and didn’t stop until it finally hit bottom at 1.04 in March 2015. Since then, it was unable to recover and even hit a new low of 1.03 at the start of this year. So the climb back up to 1.15 yesterday recovered less than a third of what was lost, as shown in the chart below.

Here are five reasons why I don’t believe the dollar index will drop much lower, and will soon begin a significant move higher.

1 – Technical Support
As shown in the chart above, the dollar index has now reached the first level of support, shown in the horizontal red line identified as S1. The second level of support is all the way down at .875, but I don’t believe the index will fall anywhere near that level because it is already hitting the bottom of the Bollinger Band, which is shaded in green. Historically, hitting the bottom of the band usually means a bounce is coming soon.

2 – The Men Refused to Sit Back Down
I believe the surge in the dollar going into 2015 marked the beginning of the first scene of my economic collapse dream from July 2014. In the first scene, representatives from the U.S. were all standing around the U.S. table in a large assembly hall where all nations were gathered. The U.S. representatives stood up and refused to sit back down despite angry shouts from representatives of other nations. I believe their stand revealed the surge in the dollar index that started a couple of weeks after I received the dream and has continued ever since. If that is the correct interpretation, then their refusal to sit back down means the dollar will not return to the .79 to .81 range, but is more likely to surge even higher before the next part of the dream is fulfilled, the table getting knocked over, which revealed a sudden devaluation of the dollar and a resulting economic collapse.

3 – Prophetic Warnings of Economic Trouble
There have been prophetic warnings of economic trouble starting before the end of 2017. I don’t believe that means the table gets knocked over this year because there are too many things that must happen first, which I documented in my March 2017 update to the final four seasons of the U.S. dollar. The dollar index should move higher though because the trouble is expected to originate in either the Middle East or Germany or possibly both. Prophet Sadhu Sundar Selvaraj shared two prophetic warnings of war in the Middle East starting this year. Prophet David Wilkerson warned about global economic trouble beginning in Germany. Either of those would be bad news for the euro and Swiss franc, which would cause the dollar index to surge higher, setting the stage for the next big event, which would be the sudden devaluation of the dollar.

4 – Vision of Horrible Decline in Euro
In June 2016, I saw a short vision of the euro dropping to 99.31 against the dollar with the words, “A horrible decline.” I believe the current rise in the euro is setting the stage for the horrible decline, which would cause the dollar index to surge higher.

5 – Vision of Devalued Franc
In December 2015, I had a dream showing the dollar gaining significant value against the Swiss franc, moving up to 1.35 francs per dollar. I believe that move was confirmed in my karate fight dream with the USD fighter inflicting quick slaps on the CHF fighter at the start of the fight. The quick slaps were followed by the dirty punch, which I believe is another way of showing the table getting turned over. Like the horrible decline in the euro, a drop in the franc’s value would cause the dollar index to surge much higher. I believe that is coming next and soon.

Conclusion:
Technical analysis and prophetic insights both indicate the dollar index should soon start rising significantly. I have not been shown the timing for these events, so I am relying on others for that, but it fits with 2017 being a jubilee year and a year of transitions.

The current dip in the dollar index should now be close to the bottom, which means it provides traders with a good entry point. Even without a forex account, anyone with a brokerage trading account can capture currency moves by trading ETF’s like FXE (EUR/USD) and FXF (CHF/USD, reverse order from the forex pair). When the dollar index surges, put options on those ETF’s would perform great.

As always, this information is provided only for prayerful consideration of what to do with it. This is not a recommendation for investing.

Thank you James – may God bless you and protect you and look right at you.

James-
I look forward to being a part of this tranfer – God has set me up for it and I don’t plan to disappoint! He picked an extreemply generous person and I think it was all by design. I’ve always known this controlled collapse was going to happen, I can’t believe we’re about to live through this. We have so much work to do to prepare ourselves and help others!

I believe we are getting close, but after 21 years of waiting, I have a whole new definition of close.

What will cause the Euro to decline so much? Will it be the UK leaving the EU/Brexit, will it be a bank failure or a nation defaulting….such as Greece, Italy or Spain?

Thanks for the time you give to this blog.

Almost all european nations are now buried with debt. In addition, their financial institutions have enormous risk exposure from their derivative products. One mistake forecasting interest rate movements could bring down the whole system, especially if Germany goes down. It is just a matter of time because the present course is unsustainable.

James,
When the dollar index starts going higher due to the problems with the euro and franc what will that do to the equities? do you think they will be going down do the markets having trouble in Europe? When the dollar is going up would that also be a good time to be in FAZ you think along with FXE/FXF? Thanks!

The same events that would weaken the euro and franc would also tend to weaken equities and cause FAZ to move higher, similar to events from 2011 and 2012. Investors don’t like the added risks caused by uncertainty or instability, so equities would fall while many would seek refuge in U.S. dollars, causing it to gain even more value.

James, just one more thing to consider:
In August 2017 President Trump will have to make a decision on whether or not they should raise the US debt ceiling….
He may not have other viable alternative but to raise the debt ceiling with would temporarily (weeks, months ??) result in decreasing the dollar index.

That will be interesting to watch. They kicked the can down the road, but the road soon ends.