You are here: Home » Church » Rapture » “When the fire comes down, then you will go up.” 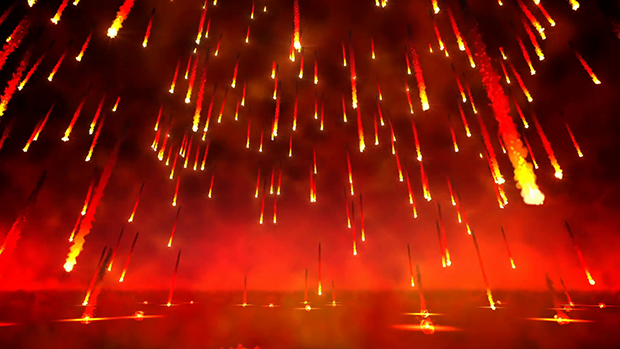 Sister Barbara Francis asked God to tell her when the rapture will happen. Rather than giving her a date, He gave her a sign to watch, just as He has done repeatedly in the scriptures. She shares her testimony in the 3-minute video shown below.

I found her testimony interesting because it confirms the vision given to Pastor TD Hale on November 24, 2012, which he described as follows:

“Then an earthquake hit Washington DC. Then I saw the earth open up and it went towards the Washington monument then towards the Jefferson Memorial. At that point I began to see an odd colored rain falling. It was the color of fire or something. It started slowly coming down then it intensified little by little. It was coming down faster and faster until the waters started rising. As the waters started rising I went up higher into the atmosphere and I saw the map of the United States. I could see the outline. The waters left Washington and began to flood across the whole United States. I saw them hit Maryland, West Virginia, Ohio, Michigan, Kentucky, Indiana, South Carolina, until it completely went all across the United States.

People began to scream across the nation and all I could hear was a mournful sound. It was as if something had happened, a great loss, like if you went into a funeral home and somebody had passed away and you were very close to them. It was that kind of mournful sound. Even in my dream I thought about the days of Noah and what it must have felt like for the people who were outside of the ark when the flood came but they could not get in. They had not listened to the voice of Noah or to the voice of God when he had spoken to them. This is the thing. God is speaking to them one last time. God is speaking.

As I was in the air, I saw America in this state of being covered with these flood waters. Then all of a sudden as I was suspended in the air, I could see these beams of light quickly coming up out of the flood waters. Like at the speed of light they were quickly going up into the air. There were millions it looked like. Then at that moment I was taken higher above the earth and I could see the round earth and all over the earth I started seeing those lights shooting up all over the world.” (see complete post)

Like Sister Barbara Francis, Pastor Hale saw fire coming down and beams of light quickly moving up, which he described as being like the speed of light. His description sounds a lot like Paul’s description of the rapture happening “in a moment, in the twinkling of an eye”, as shown here:

51 Behold, I tell you a mystery; we will not all sleep, but we will all be changed,
52 in a moment, in the twinkling of an eye, at the last trumpet; for the trumpet will sound, and the dead will be raised imperishable, and we will be changed.
53 For this perishable must put on the imperishable, and this mortal must put on immortality.
54 But when this perishable will have put on the imperishable, and this mortal will have put on immortality, then will come about the saying that is written, “Death is swallowed up in victory. (1 Corinthians 15:51-54)

My interpretation is the fire is the wrath of God being poured out on the whore of Babylon and all her children at the start of the great tribulation, which comes after the 42-month tribulation.

Pastor Hale specifically saw this event starting in Washington DC, the capital city of the United States, representing the judgment of God coming upon the whole nation. As the world’s financial center and pornography center, the United States has been a leading force in advancing the spirit of Babylon, which is the spirit of antichrist, throughout the world, which is why the wrath of God is coming upon our land. However, if this is the context for the rapture, as I believe it is, it will be a worldwide event, not limited to the United States and will include the mother of all harlots who has been drunk with the blood of the saints for the past 2,000 years, Rome (Revelation 17:6, 18:24).

18 The woman whom you saw is the great city, which reigns over the kings of the earth.” (Revelation 17:18)

8 For this reason in one day her plagues will come, pestilence and mourning and famine, and she will be burned up with fire; for the Lord God who judges her is strong. (Revelation 18:6)

And in her was found the blood of prophets and of saints and of all who have been slain on the earth.” (Revelation 18:24)

Greetings and Blessings,
I believe both are describing The 6th Seal, which is the timing of what I have been shown for “the rapture” (AKA, “Pre-Wrath Rapture”)
Revelation 6:12-17 ~

I looked when He broke the sixth seal, and there was a great earthquake; and the sun became black as sackcloth made of hair, and the whole moon became like blood; and the stars of the sky fell to the earth, as a fig tree casts its unripe figs when shaken by a great wind. The sky was split apart like a scroll when it is rolled up, and every mountain and island were moved out of their places. Then the kings of the earth and the great men and the commanders and the rich and the strong and every slave and free man hid themselves in the caves and among the rocks of the mountains; and they *said to the mountains and to the rocks, “Fall on us and hide us from the presence of Him who sits on the throne, and from the wrath of the Lamb; for the great day of their wrath has come, and who is able to stand?”

Sister Linda I think this is an early event also and soon coming from planet X . I believe it is the first event we believers will know is from GOD and when the 3 days of darkness come . I recommend Timfoster 405 for an understanding of the raptures , he has changed my mind much in the last year . Blessings !

I agree with you. As Planet X/Wormwood now behind our sun. This is why we’re having all these earth changes as well.

I agree as well Linda and thats exactly how it will happen. The Lord is confirming this!

I agree and so do lots of scriptures.

Light,light, light of the Holy Ghost shine on me…

Rome. Thank you for saying that.

They’ve always been at the scene of the most horrendous crimes against Christians in history, which makes them the only ones who meet the requirements described in Isaiah 47 and Revelation 17-18.