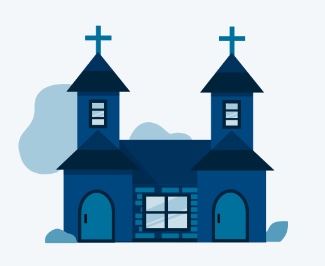 The Federal Emergency Management Agency (FEMA) is overseeing the injections of American citizens with the gene modifying solution that has been falsely presented to the public as COVID-19 vaccines in the same way that previous poisonous injections have been disguised as vaccines. Yet, instead of holding our leaders accountable for their previous genocides, most Americans continue to blindly trust them.

FEMA’s website identifies churches as one of their five primary ways for injecting United States citizens, listed as follows:

As documented in many previous posts in Z3 News Vaccine category, many experts have identified these injections as potentially lethal since they have been designed to create an autoimmune disease similar to AIDS, so it’s sad to see churches participating in the distribution, which would not be possible without the consent of the church leadership and is evidence of the apostate spiritual condition of many leaders and church members. I believe this is also a sign of the times, fulfilling scriptural warnings of a great falling away from the faith, as shown below.

1 Now, brethren, concerning the coming of our Lord Jesus Christ and our gathering together to Him, we ask you,
2 not to be soon shaken in mind or troubled, either by spirit or by word or by letter, as if from us, as though the day of Christ had come.
3 Let no one deceive you by any means; for that Day will not come unless the falling away comes first, and the man of sin is revealed, the son of perdition,
4 who opposes and exalts himself above all that is called God or that is worshiped, so that he sits as God in the temple of God, showing himself that he is God. (2 Thessalonians 2:1-4 NKJV)

1 Now the Spirit expressly says that in latter times some will depart from the faith, giving heed to deceiving spirits and doctrines of demons,
2 speaking lies in hypocrisy, having their own conscience seared with a hot iron,
3 forbidding to marry, and commanding to abstain from foods which God created to be received with thanksgiving by those who believe and know the truth. (1 Timothy 4:1-3 NKJV)

3 For the time will come when they will not endure sound doctrine, but according to their own desires, because they have itching ears, they will heap up for themselves teachers;
4 and they will turn their ears away from the truth, and be turned aside to fables. (2 Timothy 4:3-4 NKJV)

Thanks to Z3er Eve for sharing the FEMA link.

I would like to join please?! Does anybody think these shots might be the mark of the beast?! Lord I pray they’re not!!!!!!!

It’s very sad how the typical pastor goes right along with the CNN/mainstream media propaganda BS that these shots really are a vaccine. They went to divinity school folks, not MIT.

Sad state of affairs with these particular churches-congregations. Well stated James the great falling away from the Truth.-faith.

I was listening to an Interview by David Ike-(UK) with Celeste Solum last night it was 1 hr 31 mins ;It was posted up on a before its news site.. I had not been able to get them up previously had trouble connecting But this interview is one of the latest for March 2021.-with much more new info. & can remember Celeste talks about documents she has seen from ? Fema & other sources ( all shown in the presentation plus the technocracy behind it all.

Tues March 09 2021 .Title is What is really in the vaccines.? gene therapy + much more .Re what is in store for us if they cull the population & genetically modify us so they can then integrate peoples bodies into their IoT -(Internet of things) 5 G tracking grid ,complete with their own patented crypto currency. et al.

The vaccinated become PATENTED as well thus owned by the corporations who have injected them eg Moderna ,Pfizer etc.

Mentioned fusing people with Tardigrades – from FEMA with love.

included the interview. They talk about those who have been deceived into thinking these so called vaccines are okay.

Hello and thank you for these great teachings and insights. I agree that some churches do not take a stand on very important issues such as abortion, they choose to do nothing. I volunteer in helping a pro-life local organization in our town, when I was on Facebook, I advocated for the unborn. There is never a sound from most of these churches and now they go along like sheep telling everyone to obey. This is one of the reasons our country is in the state it is in.

Thanks for this info. I want to build up my faith with those who are seeking the truth, therefore I’m weeding out ministries that are promoting the “vaccines” in any way.