You are here: Home » Prophecies » End Time Prophecies » Birth Pangs » Famine and Death Are Coming to America
Share this post: 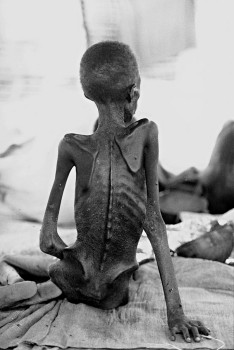 Famine and death are not the will of God for America. He has a much better plan. However, His will is not always done on earth. If it was, Jesus would not have taught us to pray, “thy will be done on earth as it is in heaven” (Matthew 6:10).

God’s voice has been almost totally silenced in our schools, our government, our news media, our public lands, our shopping malls, and even in our churches. He has not rejected us, but we have rejected Him. So we should not be surprised when His hand of protection and provision is removed from our land.

Jesus warned us the end times would be marked by specific events that would be signs letting us know the great day of the Lord is drawing near. He said these events would come upon the earth like birth pangs, meaning they would come with great intensity for a season then they would go away only to return again with greater intensity. One of those events is famine (Matthew 24:7).

Severe famines have already come in many parts of the earth, but not in America. For that reason, many Americans don’t believe it could ever happen here. However, many of God’s people are now seeing and hearing warnings from the Lord regarding a great famine coming to America, followed by death for many people. As bad as that sounds, it is better to hear it now than to get blind-sided by it later. At least we have time now to repent and get right with God. That is our best hope for this life and the next.

The following are several warnings about famine and death coming to America. The first one is a vision I received about two months ago.

During my prayer time, I saw a vision of a man standing in front of me. I saw his bare back. He was so thin I could see all of his ribs. As I watched he turned into a skeleton. I believe the interpretation is a warning of famine coming, which will be followed by death for many people.

I was also warned, by the appearing of the black horse and its rider, about famine. The angel said, “There will be a famine of food in your nation!” Not only this, but also the prices of food, particularly grains, will dramatically rise. We will see not only shortages and high prices, but I was shown significant starvation occurring during this time. Death followed this black horse!

Prophetic minister John Paul Jackson was shown many different news headlines from the future. Among them he saw the following headlines:

Drought Continues to Cause Prayer to Rise

Although the situation sounds bleak, it is not hopeless because we have a solution available. We can turn to the Lord concerning the problems facing our country. That is the only solution that will work. We must return to the Lord by repenting of everything that has come between Him and us. I believe our problems will continue to get worse until we repent. However, those who repent will receive His loving presence and His promises of protection and provision.

Believers do not have to be victims of the failed systems of this world. God’s plan is for His people to be over-comers in this life.

In all these things we overwhelmingly conquer through Him who loved us. (Romans 8:37)

David Wilkerson spoke of people tripping over the many bodies which died due to starvation.

Thank you for this entire website! I am richly blessed daily!

Last month this verse in Revelation 18 spoke to me about America: “Therefore in one day her plagues will overtake her: death, mourning and famine.” I wrote a few more details in a blog post here: http://mystic2020.blogspot.com/2015/09/it-will-come-in-one-day.html

Thank you for your post, you sharing this with us. GBU. Adela