You are here: Home » Prophecies » America Under Attack » Dream – “Universally the Worst Disaster That Has Ever Happened” to Strike the USA (and NYC), WARNING! 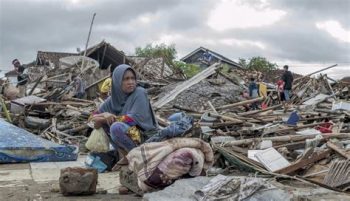 He was in NYC & saw the crest of the wave (10 stories tall; 100 meters) of ocean water devastating buildings, shattering windows, people screaming, etc. No one could survive the tsunami that was in its path.

When Christopher asked God when this will happen. He saw a vision of a huge, castle gate that he saw lifting up. He understood behind the gate was a “flood of God’s judgements”. There will be a series of judgements from less severe to more severe, before this cataclysmic event occurs. Millions will die. The gate went from fully closed to fully open at the same speed and never stopped.

This dream is confirmed by another dream given to him in September 2017 entitled “Prayer Request! Coming Massive USA East Coast Tsunami!”

This dream is confirmed by another dream given to him in June 2018 entitled, “Dream/Word: ‘The sea shall split, an earthquake for judgment on North America”’WARNING!‘ (a worldwide earthquake that sets off an underwater earthquake bringing a tsunami to NC down to Cuba)
https://www.youtube.com/watch?v=mZZ9wPVHApM

I read the word of God daily and pray daily. I have shared a similar dream to this over the years with many friends. I had my dream before the terrible New Orleans flood. What the Holy Spirit showed me was a city like New York where the water was half way up the buildings. What was unusual was that waterfalls were pouring over the top of the high rise buildings. It looked like everyone in the city died. I was shown the dead rising from this event like a rapture. Each person that was being raptured had an angel behind them with a candle light. However the wicked had the light sniffed out! I watched the Christian people rise to heaven which was green and beautiful. There was a sign in heaven but it was difficult to read. I believe this means the people will not see the signs of this event coming. It will catch them off guard. I felt like everyone died when this occurred, but the Christians were raptured to heaven. .

My husband never reads prophetic websites like this and always bears with me when I share things with him but doesn’t listen eagerly. He is a born again believer but just doesn’t share my passion for the prophetic. HOWEVER, he saw Washington D.C. under water in a dream – he said it was already under water and then a second tidal wave/tsunami came in. He has also dreamt of a draft and facing the very real possibility that he could be killed. And he had a dream about hiding in caves from poisonous gas. I believe he gets these from the Lord (of course I do) but he says their just weird dreams.

I had a similar dream regarding NYC being destroyed by a giant tsunami in the late 90’s. It was completely destroyed.

As you shared your dream Christopher, I clearly remembered such a dream I had in 1990’s. It was a sunny day and then I saw a skyscraper on the coast and this humongous wave swept over the skyscraper. I was astonished at how huge, powerful, and destructive this wave was. The dream would not leave me so I told my godly pastor who has a well tested gift to interpret dreams but he did not know what to think…

I have been having Tsunami dreams for years in different places. I am posting a link to my blog, where they are posted, I believe there is one regarding NY.
http://propheticdreams.home.blog/2018/09/16/tsunami-10-separate-dreams-of-catastrophic-tsunamis/

Has anyone been shown how to build a safe haven? I think Chris said a whole back he had plans or knew how to but idk if he shared them. I’m certain they’d have to be in specific parts of the country

I thought the Bible said God would never flood the earth again?

Hi Jensen – The Bible does say that God will never again flood the whole earth. Tsunamis hit specific areas and dissipate over an area. There will be tsunamis hitting specific areas like the Southeastern part of the U.S. or the West Coast of the U.S. or Melbourne, Australia or NYC but these tsunamis will not flood the whole Earth, just sections of the world and eventually some, if not all, of these massive amounts of water will subside and/or redistribute itself. Even when a tsunami hits an area, there will be many other parts of a continent, like the U.S., Europe, Australia, etc., that will remain completely unaffected so there is no contradiction with tsunamis coming as a form of God’s judgement and tsunamis flooding cities, states and/or specific geographical areas. I hope that helps clarify.

He promised not to flood the WHOLE earth again.

Jenson also note: Luke 21:25 “And there will be signs in the sun, in the moon, and in the stars; and on the earth distress of nations, with perplexity, the sea and the waves roaring.” Also Jeremiah 51:42 “The sea has come up over Babylon; she is covered with the multitude of its waves.”

Thank you Expat Gal for posting this. God bless. Christopher.

the entire earth no, but portions of it, absolutely.

I’ll look it up on YouTube. I can’t hear him.

Hi Denise – That’s strange because I checked all 3 videos & they all played fine as they are embedded in the article. Not sure why that happened. 🤔

Thank you so much, Expat Gal! I always look forward to your posts.