You are here: Home » Babylon » Antichrist » Excellent, In-depth Decode of iPetgoat ii by a Christian Brother, Trumpet For Yahweh 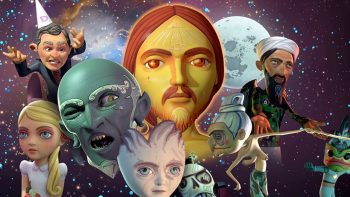 If you are looking for an excellent decode from a Christian perspective and with a Scriptural references of the occultic iPetGoat ii Video, read this document in its entirety. iPetGoatii foreshadows: Iran War tensions, the oil contentions in the Strait of Hormuz, Freemason puppet Presidents controlled by Satan, the Funeral of Iran General Soleimani, destruction of a US Aircraft Carrier, the dividing of God’s Holy Land Jerusalem, division of America, Tsunamis hitting the two coasts of the U.S., FEMA detention camps, the Mark of the Beast RFID chip in forehead (shown on the goats), an Illuminati false flag strike on Mecca, the Coronavirus breaking out in China around the Chinese New Year, war, economic collapse, the opioid crisis, nuclear incident, etc. The document will help you see the level of deception and evil in our world and how the Elites show their plans (ahead of events occurring) to usher in the Antichrist.

There were massive outages today throughout the United States with cellular companies. These were blamed on a hack from outside the U.S. but whistleblowers have shared that the communication systems will be taken down when the world’s most powerful no longer want people to be able to communicate in any manner, possibly when persecution, rounding up of dissidents &/or genocide begins.

Here is another excellent video By TheologyEd explaining what is happening in 2020 using iPetGoat ii, the “ritual magic” used in iPetGoat ii, Aleister Crowley, Freemasonry, etc.

Key highlights from this video:
– The scene with Lily (the blond girl in a white dress with 12 greenish-blue figurines represent the month) in iPetGoat ii is the calendar year 2020 & explains this in detail.
– In 2012 when the video was released, it foreshadowed the lockdown occurring in China in January and for the rest of the world beginning in March. The lockdowns in different parts of the world are shown to continue throughout 2020
– The June 21st solar eclipse is represented multiple places in the video and shows this will serve as a marker for the times. Although he does not remark that there will be bloodshed starting after this event, I have shared that June 21st is considered one of the top 3 days of the year for blood sacrifices by Satanists.
– By July, events begin to happen from iPetGoat ii including economic calamity, war, major destruction, an event significantly worse with a farther reaching impact than 9/11, likely nuclear weapons used and major, destructive weather events.
– The buck moon is associated with chaos & catastrophe. The “wild, unruly grass” to the right of the rabbit on the back wall symbolizes disorder and chaos.
– He states that the U.S., Rome and Christianity is destroyed. He encourages those in the U.S. to ask God if they should leave the U.S. or relocate to another location. Per my other post with a decode by him, he shares the message that by July 4th, the Elites are saying, “You should have left.” which could be referring to the cities or the U.S.
– The entire world will be negatively impacted but there was a special emphasis on the U.S.’ destruction in parts of the video as represented by the American flag tearing in half during a winter storm.

Regardless, especially for my Brothers & Sisters in the U.S., it is past time to prepare physically, spiritually & mentally. Do not allow these events to cause you fear or to in any way make you a part of The Great Falling Away. We must push closer into God, His Word and His promises for us and our loved ones.🙏🏻❤️

Thank you for sharing and helping the brothers and sisters.

Hi Brothers & Sisters in Christ! I shared it hoping the timing of a Rapture does not distract & the discussion this creates, not take away from the overall value of the decode.

I respect everyone’s beliefs regarding the Rapture & God has affirmed to me to focus on the things that unite us – not divide us. 💝

Melissa – I absolutely agree that the Rapture is not a heaven/hell issue so let’s respectfully allow the community to focus on the decode without focusing on the creator of the decode’s belief regarding the Rapture. Blessings to you all & thanks for sharing your thoughts! 😊

Interesting reading, till he talks about LEft behind, there is no pretrib rapture, just not there, biblically..
FB censors the link heavily, when I tried to share it.
Thanks you for sharing.

The Bible definitely supports a rapture, just not pre-trib.
Excellent article, Expat Gal. Thanks for posting.

We all have our opinions on that. However, the rapture is not heaven and hell issue and is not important to know for salvation. We have to stay focused on Jesus and not on what we disagree regarding other believers.