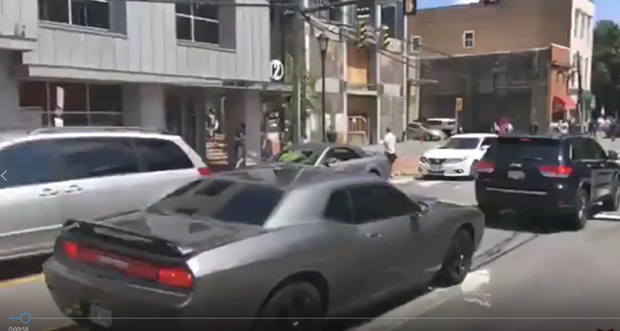 In the two videos shown below, YouTube host SonofNewo does a great job of analyzing what happened in Charlottesville VA on August 12 and why it does not fit the mainstream news media narrative.

Often when innocent people are murdered by assassins or terrorists, the mainstream news media attributes it to one person acting alone, like when they claimed Lee Harvey Oswald assassinated John F Kennedy. This video presents evidence showing the events in Charlottesville were not the work of one man, but part of a much larger plan.

First, SonofNewo exposed the leaders of the white nationalists as frauds. In addition to Jason Kessler, the organizer of Unite the Right, an anarchist participant in Occupy Wall Street and a long time Obama supporter as documented in my previous posts, he also identifies Richard Spencer, who has received an artificially high level of press coverage as a leader of the alt-right. SonofNewo explains, “That is textbook deep state behavior. You raise the profile of somebody who is an infiltrator, an agent of yours that is operating under cover within a movement, you raise their profile and then when an incident occurs, you use that person to discredit who you want to discredit. That’s textbook and that’s what they’re doing with Richard Spencer.”

SonofNewo also identified a third leader of the group, Mike Enoch, whose mother has made large donations to Hillary Clinton’s campaign.

Next, he analyzed a livestream video filmed by a freelance reporter named Ford Fischer who has been embedded in the white nationalist group, interviewing them and documenting their activities for the past several months. Ford Fischer followed the white supremacists down the streets of Charlottesville prior to the tragic event when the Dodge Challenger drove into the crowd of counter-protestors, at 1:42 pm. His video is suspicious for several reasons:

Another interesting coincidence is all of the white nationalists had cleared out of the area of the crash ahead of time. Ford Fischer filmed them walking several blocks north just a few minutes before, further supporting the likelihood they all knew what was about to happen. It appears their plan called for innocent blood, a sacrificial martyr, but to stir up the most strife it needed to be a counter-protestor rather than one of their own.

In the following 37-minute video, he shares a hi-definition photograph showing the license plate of the maroon van, which is a Virginia plate, VEP-6635. He ran a search for that license plate and the corresponding VIN number and found up until May 19, the car was registered in Montana for ten years from January 1, 2007 until May 19, 2017. Up until February 2, 2017, the car was owned by Copart Inc, a junk and salvage company located in Dallas TX. They bought it after it was damaged in an accident even though the car remained in Montana. It was listed in a salvage auction in April 2017. So it was the ideal car to use in a planned crash, further supporting the possibility that it was part of an elaborate plan, a staged event, not the work of one man acting alone.

These points provide further evidence showing the story reported by the mainstream news media does not add up. These facts support the possibility that the whole group of white nationalists were all frauds, paid agitators on a mission to stir up racial tensions, not just the leaders. I believe it is further evidence showing our nation is under attack by well funded, well organized deep state operatives seeking to divide us against one another as they are seeking to destroy our Constitutional republic, presumably to replace it with their own fascist tyrannical government. I believe we are in a spiritual battle, not fighting against flesh and blood opponents, but against the spirit of antichrist, which is now seeking to remove the biggest obstacle to the rise of the beast system, the United States of America.

To answer the man’s question…what was that Challenger doing? The answer may be provided by a previous post here, involving the woman witness in the restaurant near the accident scene. Didnt that woman witness in the restaurant mention her and/or another person saw that car as it approached the crowd of people and one of them tapped on the window or something? Wouldnt that indicate the challenger at one point was at a complete stop? After the window tap, the driver then gunned the car up the street toward the people. Very strange why the maroon van would be parked there 5 minutes before, without a driver. Very strange indeed as is the vehicle history. Apparently someone intentionally bought that van, fixed the front end, and repainted it…………..for what purpose? to sell it to this Johnny Chandler guy? Why would someone just leave a car in an intersection like that? Again, I think the important question is, IF YOU WANTED TO STAGE AND EVENT, how would YOU DO IT? wonder as well, who owned the other cars, like the Tundra and the silver car/black top?God reveals mysteries. Great post and story.

I thought the same thing Jerry. After crossing E Main Street, as shown in slow motion on the second video, the Dodge Challenger only had to travel one block to where it hit the crowd, so it must have stopped briefly since the live stream shows it took about 90 seconds. That would fit the woman’s eyewitness testimony.

I have contacted Charles Patrick, the man who interviewed the woman and claimed she is his personal friend, to find out the name of the restaurant where she ate because I have learned at least two restaurants on E Main Street were closed that day. I have been able to verify parts of her story, but would like more complete details to verify all of it.

Did you ever hear back from Charles Patrick? I’ve been watching a lot of videos the past few days, including SonofNewo’s excellent ones you wrote about. There are way too many inconsistencies and no explanations. People found Johnny Chandler to be the registered owner of the maroon van, as jerry rigg noted. They also believe he was in the crowd watching, wearing a white shirt, dark purple hat and holding a red/orange cell phone as though recording. It’s only a couple frames but supposedly this is him at 26:29: https://youtu.be/JEpDiM0M610?t=26m29s

Yes, I received a reply from Charles Patrick. He called me an idiot and accused me of working for CNN. Others have also asked him for the name of the restaurant, but he has no answer.

In addition, trying to validate his claims about six buses, he posted a video of buses that did not match the description the woman gave. She said they were dark gray charter buses, but his video was all white and yellow school buses. Another commenter identified the video was filmed in Baltimore, not Charlottesville. So Charles Patrick has no credibility in my opinion.

I regret that I shared his interview, but as you stated, there is plenty of hard facts showing the events were orchestrated and carried out be paid thugs.

For anyone who watches YouTube, Mr. Cati has a video discussion about the gematria of the license plates of both the Charger and the car his mother drives…thought provoking. There are plots within plots and he goes deep…you may want to see some earlier vids to get a handle on the entities involved.

In looking into the Honda van, seeing the same records and auction results you detail in the article.

Here’s something to think about: If the van was auctioned in April, it certainly could have been repaired after the salvage auction and found it’s way to a Virginia owner. What doesn’t sync is the inspection sticker displayed prominietly in the middle of the windshield – expired Feb 2018. This means that van was certified as road worthy in Virginia in Feb 2017. How does that work?

Great question. It doesn’t add up.

Funny, can’t get the videos to play.

I just tried them and they were working fine for me.