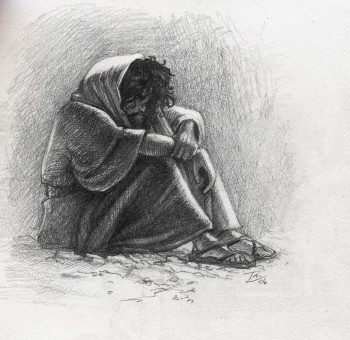 “As the deer pants for the water brook, so my soul pants for You, Oh God. My soul thirsts for the living God…” Psalm 42:1-2

America pants not for living water but for bigger houses, wide screen televisions, new cars, condos on the beach; anything, everything but the living God. Blessed more than any other nation in history, America has taken each blessing and with arms outstretched reached for more. Americans race past the lost and hurting in their quest for bigger and better. America has followed in the steps of Esau and traded her birthright for momentary satisfaction. And like Esau, Americans will weep bitterly. Not for what she has done, but for what she has lost.

Just as the people of Israel did to the prophet Isaiah, the people of America have done to the prophets sent to them by the Lord. America has rejected sound doctrine, which comes line upon line and precept upon precept. The word of the Lord sounded to them like stammering speech and like a foreign language. Therefore, the Lord will now intentionally speak to them in ways they will not understand, thus causing them to stumble, fall down, be broken, and taken captive.

“Persecution is coming to America. My children will be severely tested. Pray for strength to endure, to finish the race I have set before you. Cleave to Me without wavering, for He who has promised IS faithful.”

It will be Israel who will weep as one who is in bitterness for his first born (Zech. 12:10) when they see the holes in Christ’s hands and side at his appearing, at the second advent, at the end of the Tribulation. Two thirds of Israel will die (13:8) during the Tribulation. Then all Israel will be saved (Rom.11:26) whose names are written in the Lamb’s Book of Life. The Tribulation is mainly about Israel. The 144,000, the Women and the remnant are all Jews. The Church isn’t mentioned once on earth in C. 4-19 ( after being mentioned 21 times in C. 1-3. It’s Jacob’s trouble, Daniel’s 70th Week. All 70 Weeks of Daniel (9:24) are about Jerusalem and the Jews. God bless. Dolph

Sounds like you missed the point. This article isn’t about the tribulation. It is about the judgment of God on America, which begins this year.

exactly.
James btw, where could I find more stuff from “Marianella Morales”?
thx brother and Shalom and Godspeed

I am hoping she will share more with us here at Z3. Beyond that, sounds like you might have to get your hands on her journals!

Ezekiek Chapter 7 is relevant, “The end has come”.