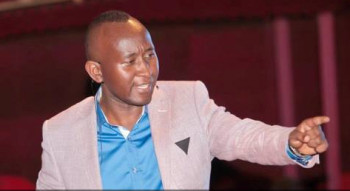 On January 6 2015 Ugandan Christian minister Elvis Mbonye shared a prophetic word of warning about a coming economic collapse in the United States. He saw the economy plunging in June/July 2015 and continuing to go down for years.

Elvis Mbonye is the founder and leader of a large church in Uganda called Zoe Fellowship. He also shares prophetic words on his Facebook page. His prophetic track record includes the following accurate fulfillments:

The following is the transcribed text of his prophetic warning for the United States economy. The 4-minute YouTube video is also shown below, but his English is very hard to understand. His warning also includes a prophecy of a coming alliance between Russia and China.

Now there is a reason why I felt its importance for starting out here and not to lose it. The Lord, the wisdom of the Lord is, for a lack of better words, we can call it self-reliance. Of course there are going to be withdrawals. First of all, when I am sharing these things, I am not an economist, so if I don’t eloquently bring out something you understand it. And yet, if I speak things, and you misunderstand it for being an economist, then you are, you know, you will be totally messed up. Now the thing is you should know that me not being an economist, how would I get to know certain of those things. So you should seek God on that. Those of you who can act, and the Lord has placed most of you in some positions that you may start acting. Especially the children of God where we become a light during a time like that.

And so, anyway, the warning is this. The caution is this, is on reliance on western resources. And the Lord has placed within us enough to sustain us. So we should not actually call it self-reliance. We should call it God-reliance because that is actually what it is better.

So now you who are placed in some of these places to make some, to prepare yourself for that time. You need to do that while the others are waking up. For your better position to run whatever you are running for the glory of God.

The following video is provided for anyone who wants to learn more about the ministry of Elvis Mbonye and Zoe Fellowship.

Thanks to Shan Story, a visitor to this site, for sharing this prophetic message with us.

James this man was correct, the market will continue to go lower, it is going to go down for years, years. Thank God for his word months ago and your word about Faz, it has helped me to be positioned for the big crash coming in jan 2016 and continuing for years to come. God bless his children with peace during this upcoming year.

Hi James, Elvis Mbonye’s prophecy is totally fulfilled. The U.S. economy plunged in June/July 2015 though the stock market has not collapsed yet. Please check the following past records : #9 The ISM Manufacturing Index, which is the most important measurement of U.S. manufacturing activity, has fallen for four months in a row. http://www.zerohedge.com/news/2015-11-03/18-numbers-scream-crippling-global-recession-has-arrived And a major global recession is here.

Jonah’s message to Nineveh was, “In 40 days, Nineveh will be destroyed” Do you remember? But they repented and it didnt happen. The solution (which is close to impossible now) is for the USA, as a nation, to repent and turn from evil.

The thing is, in ALL of the OT Bibles descriptions of repentance it started with the king, his governing body, the religious leaders, down to the everyday people….. i.e. our leaders would have to step up and repent. Our leaders are arrogant and seem to be satisfied doing the bidding of the one in the WH……… Not exactly Nineveh is it ?

PS- sorry about the wall of text, I had it in paragraphs. 🙁

Has this man ever said “thus saith the Lord” and then it didn’t come to pass? Well then you know, either way.

As far as the economy/market crashing, lots of folks who are not Christian have believed that’s what’s coming this year or next. Since last falls drop. The US markets changed last July 2014 & have not recovered their strength; at the same time the USD has been roaring & commodities whimpering.

One tidbit, in summer 2008 commodities & China began crashing…then the US markets followed. Fast forward to July 2015 exactly 7 years later- we have the same situation with c&C.

From my point of view as an economic news junky & 40 hour a week market watcher/trader, I believe this guy is spot on & the cracks are appearing just like he said. But it has been going on longer then just this summer; it’s speeding up though. In my opinion. Watch Phil at philstockworld.com, he’s expecting a DOW death cross shortly & markets falling in August.

You’ve got a point.

Vagueness in prophecy never does make a splash. Just leaves us in leftcfield to wonder.

As I can see here, many users read something and interpret as something fix. But mostly you have to read twice or more to catch all points.
He said that the economy would start to plunge. That does not mean that the stock market reflect the plunge at the same time. Of course it does not in our manipulated world. There are a lot of charts out there esp. at zerohedge where you can see the divergence between shares and earnings / yields and so on.

He also said ” I am not an economist, so if I don’t eloquently bring out something you understand it. And yet, if I speak things, and you misunderstand it for being an economist, then you are, you know, you will be totally messed up”

If it is not july, it will be sep till dec of this year. I don’t see the different, I don’t buy stocks. But I am glad you are happy with your decision on holding your purchase, it seems you are right on your decision. I am right now more concern about whether America the Babylon will be back up wealth and strong again after this deadly collapse or NOT. I know the sins are so great that God is determined to punish this nation, no more delay, but does that mean America will be dead from now on? We wiil becoming third world country? if so, then how come in Rev 16:19 and chapter 18 show that Amercia the babylon is wealthy when she’s at her final destruction in the seven bowl of God’s wrath? while we are now just in the third seal. I am so confused.

With headlines like “more positive growth 2nd half of year” seems to me to be confirmation that this prophecy has failed, now that its the end of July and the market is still hovering at 2100. This is not even a start on a downward course at all as far as many of us can see. Glad I’m holding out on my purchases to august. No need to buy a lot of unnecessary time on my puts and faz is looking very attractive in this $10.35 range.

That depends on who you believe. The mainstream news media is pure propaganda telling us everything is wonderful, nothing to worry about. Meanwhile, we are entering into one of the biggest storms our country has ever faced. Time will tell, but Elvis saw us beginning a course of plunging and technical analysts are already reporting that is now happening. The upward trend in place since 2009 has now been broken and a new trend is now starting, a new course, exactly like he saw.