You are here: Home » Babylon » Mark of the Beast » Dream Reveals Government Plan to Implant Microchips in Everyone
Share this post: 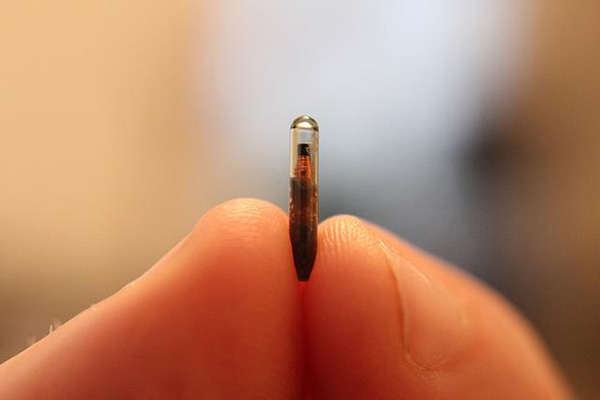 I recently had a dream that government agents were giving classes on a new microchip, which was to be implanted within the participant’s bodies.  They passed out the microchips to everyone in the classroom.

The agents tried to have an innocent demeanor however, I sensed their evil plot.  The people seemed eager to get their new found toy implanted, as if it was the newest gadget, such as the new iPhone or something on that scale.  Afterwards, I was outside talking to some of them and I just came out and said, “This is the mark of the beast.”

Almost everyone who heard me seemed as if they did not believe me or did not care.  I remember one young man was very concerned about what I said.  It was as if he had remembered that someone in his past had talked to him about the mark of the beast before, and it apparently had an impact on him, but I don’t know if it changed his mind or not.

Soon afterwards, they had everyone to lineup. Everyone marched one behind the other to have their chip implanted.  Every time someone turned the corner, I heard beeps, which I automatically knew they had devices setup everywhere to track everyone’s movement.

Agents were everywhere.  I even noticed a robot/human type figure was there amongst the agents.  I really got the feeling that the government already has everything set up and they are just waiting on the right moment to unveil their plan to mark everyone they can.  The government agents looked like they were on guard to see if anyone would refuse the mark.  I discerned by the sinister look on their faces that they would deal with anyone who refused.

By the way they’re already chipping the children in school without Parents permission in Battle Hymn by John Scura/Dane Phillips and David Kupelian reads on the school system. By the way they’re taking away children from homes and charging parents with child abuse to the 48-51 vaccines required in California (kids are dying or in Zombie like state) and they’re removing the children out of the homes if you have a Bible going on right now.

It’s already here and they’re doing it and addressed in Battle Hymn by John Scura and Dane Phillips (and all the other books they reference) people refuse to see and hear it.

Freeman…On Sept 26, 2016 Dr. Oz openly promoted the implantation of a rice sized microchip on his show…which for me identifies him as a propagandist for the Globalists. He reported that they have implanted 10,000 Americans already. Going to be great…instant ID in airport…instant medical records…pay for goods with chip & etc. The Feds desperately want to push their Real ID agenda…chip will be next.

I’m sure youve seen this Brian Williams piece from 2007
https://m.youtube.com/watch?v=4xBQyuGNDKM

Freeman, thanks for warning on this. I can’t believe people still scoff at this idea.

Yes Matt, I’ve seen it. It is pretty telling of what they are truly expecting/desiring. Thanks for sharing!!!

Wow! Thanks for sharing Scott.

Legislation was just passed for this in the US. HR 4919. Passed without much comment. The you tube video in the webpage is quite informative.
http://www.zerohedge.com/news/2016-12-13/house-passes-bill-microchip-citizens-mental-disabilities-whos-next

Thankfully, I live in Canada, but it will probably come here eventually.

“Testing the Waters for the Mark of the Beast” (Mandatory Flu Shot)
published December 8, 2016 (8 minutes); WORTH watching!

Here is something that is somewhat related.
It is titled “Dream- Overcoming DNA Manipulation Through The Power of Prayer”
(8/7/2015).

In the morning of 5th December 2016, in a very tremendous Vision (Supernatural Dream) of The LORD God Almighty, The LORD Jesus Christ and The Holy Spirit, I found myself in a place where someone asked me about 666. So I explained to him, under the Power and the Inspiration of The Holy Spirit, that currently there is a Personal Identification Number (I saw written: “PIN NUMBER”) that most people are required to have, and that this will eventually be “graduated” to a Radio Frequency Identification Microchip.

=======Meaning that a moment is coming very soon when the Mark of The Beast (R.F.I.D) Micro-Chip will be made mandatory; for one to Transact any Business or Trade.

In another segment of this Vision of The LORD, The LORD presented before me former U.S.A. President Bill Clinton (in his younger Years, perhaps 10 or 20 years ago). So, I saw Bill Clinton involved in some “Trade” (an International “Trade”, sort of). One of the Trading Partners was China. So I saw in this Vision, a trade agreement of sort, whereby Bill Clinton made some agreements with China, to offset some Costs of Production. But then, I saw Bill Clinton not honoring the deal, yet unscrupulously continuing to “Trade”. I then saw the Clinton Foundation, very deeply involved in this.

=======So The LORD was essentially speaking to me, and revealing to me more about Bill Clinton and the Clinton Foundation. But to some extent, also about inter-trade engagements and agreements between The United States of America and China; and the intrigues therein—present and in the past.

The Vision of The LORD then ended.

Revelation 13: 16-18 ‘“He causes all, both small and great, rich and poor, free and slave, to receive a mark on their right hand or on their foreheads, and that no one may buy or sell except one who has the mark or the name of the beast, or the number of his name. Here is wisdom. Let him who has understanding calculate the number of the beast, for it is the number of a man: His number is 666.”’

Revelation 14: 9-13 ‘“Then a third angel followed them, saying with a loud voice, “If anyone worships the beast and his image, and receives his mark on his forehead or on his hand, he himself shall also drink of the wine of the wrath of God, which is poured out full strength into the cup of His indignation. He shall be tormented with fire and brimstone in the presence of the holy angels and in the presence of the Lamb. And the smoke of their torment ascends forever and ever; and they have no rest day or night, who worship the beast and his image, and whoever receives the mark of his name.” Here is the patience of the saints; here are those who keep the commandments of God and the faith of Jesus. Then I heard a voice from heaven saying to me, “Write: ‘Blessed are the dead who die in the Lord from now on.’” “Yes,” says the Spirit, “that they may rest from their labors, and their works follow them.”’

“Give us this day our DAILY BREAD.”
THE WORD is DAILY BREAD for the most important part of ourselves, THE SPIRIT MAN. The Word is nutrition for the Spirit Man. Without it, the inner man will be very weak. Remember, the Apostle Paul didn’t pray for little wants and desires in the natural. His prayers were for the building up of the INNER MAN.

Just read. Amazon has a beta cashier-less store in Seattle that uses an app which knows you by facial recognition, notes what products you picked up, tallies the bill and charges your card. Author wonders if tracking stops when you leave the store.

“Launching Countermeasures Prayer- The Reality of Hell” (11/19/2015).
Taking the “Mark of the Beast” when it is rolled out is a one-way ticket to eternal hell. Yes, it’s REAL!