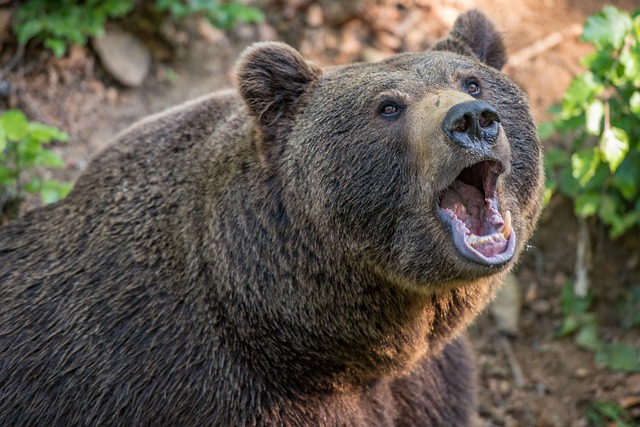 I received the following dream on September 5, 2022. It clearly seemed to be about the financial markets–a first for me as far as I can recall. I would be happy for any insight or interpretation you would like to add.

I dreamed that my wife and I were living on a small farm (in real life we live in the city). I was standing outside in the driveway and observed a large she-bear calmly standing on all fours in the field, perhaps 150-200 feet from me. She was huge, probably a good 10-12 feet from the ground to the top of her back and shoulders (about the size of a very large elephant). Her fur was light golden-brown colored. She had a small udder hanging down from her abdomen (almost like a cow’s udder), and a single cub was standing there trying to nurse. It did occur to me that it was a bit strange for a bear to have an udder like a cow, but I didn’t think much of it. Initially I didn’t really feel threatened by the bear’s presence.

However, after observing it for a few moments, I decided it would be wise to head inside. I started walking into the garage which had a 2-car wide garage door standing open toward the driveway. The open garage door was also facing directly toward the bear out in the field. About the time I entered the garage, I looked back and noticed that the bear had started lumbering over in the general direction of the house. It then occurred to me that this was a dangerous grizzly bear, and I should get inside immediately.

I quickly walked through the garage and tried to open the door into the house. As things sometimes go in dreams, I fumbled around for a while frantically trying to get it open. I first had to open a slide lock, which took me longer than it should have. I was then surprised to discover that there was no handle on the outside of the door, just the exterior round part of a bolt lock. Since it was an out-swinging door, I had to tightly clasp the edges of the bolt lock with my fingernails and slowly ease the door open. I finally got inside and locked the door behind me. It took me so long that the bear easily could have caught up with me if she had wanted to. Fortunately, she had her sights set on something else and headed straight past the open garage to the garden behind the house, so I made it inside safely.

The inside of the house was narrow. The back door of the house, which faced the garden, was straight across from the door I had just entered from the garage, and only about 8 feet away. Unlike the 1 3/4″ steel-clad walk door into the garage, the back door was only about 1 1/2 inches thick, built of old paneled wood, and the top half of the door was filled with a large, thin, single-pane window. Not very secure.

As I entered the house, I could see through the window of the back door that the bear had entered the garden. It reached over our woven wire fence into our small animal pen that was next to our garden, easily picked up a goat in its large jaws, and started ambling away across the yard toward the drive from where it had come. I yelled frantically for my wife to “Get me my gun,” a shotgun which was hanging above the back door. I didn’t want the bear to get away with our goat.

I got my gun and was prepared to head back out through the garage to confront the bear, but my wife started unlocking the back door for me. I protested that the back door was too flimsy and that if the bear were to follow me back to the house, I would prefer to have it run up against the sturdy garage door. But then my wife mentioned that if I went out the back door I could take a direct shot from right outside the door, without needing to run all the way around the house, exposing myself to being chased by the bear again. I decided to follow her advice, but I knew I couldn’t afford to miss my shot because our back door would in no way stop a charging grizzly.

I stepped outside, aimed, and took a shot at the bear, which was about 100 feet away across the back yard. She lurched forward just as I shot, and my round hit the driveway directly behind her. This angered the bear, and she turned sharply and started charging directly at me. I quickly stepped back inside and closed the door. My mind was racing, as I frantically tried to figure out how we could barricade the door to keep the bear from breaking in. We had a refrigerator right next to the back door, and I was about to call out for Sheri to help me move the fridge in front of the door, though I wasn’t sure we would even have time for that. Then I woke up.

My very first thought upon awaking was that the huge bear represents a huge bear market, not necessarily huge in terms of its duration but in terms of its severity. In other words, a crash. That is the only detail of the dream whose meaning feels quite clear to me, but I will share my thoughts on a few other details.

I knew that I had heard the term “goat” used in trading circles, but I wasn’t sure what it meant. I looked it up, and it is an acronym for “greatest of all time,” GOAT. It is frequently used to describe highly accomplished athletes, but also commonly used to refer to highly skilled traders in the trading community. People might say something like, “He’s the GOAT!” I also discovered various news articles online that have referred to a “GOAT market,” meaning a time when the market hit all-time highs or when it sustained a bull run for an exceptionally long period of time.

Both bitcoin and the stock market hit all-time highs near the end of 2021, so in a sense that could be considered to have been a “GOAT market.” Since then it has been generally in decline, though certainly not with the severity of an actual crash.

In my dream, the bear started by dragging the goat out of its pen and across the yard. From my vantage point in the house, it was essentially pulling it sideways. My thought is that this refers to the market decline that began at the beginning of 2022. The markets have fallen significantly from their all-time highs, but compared to historical levels over the past several years, the market is still moving more or less sideways on a macro level. It certainly hasn’t experienced an all-out crash yet.

When I shot at the bear and missed, it turned sharply about 90 degrees and charged straight at me at a high rate of speed, in my opinion, indicating an actual market crash which we have not yet seen. If only I had been using a rifle instead of a shotgun, perhaps I could have “sniped the top” (another trading term) and entered a short position right before it bolted.

After I awoke from the dream, I laid awake for 5-10 minutes pondering the dream before looking at my alarm. When I did, the time was 3:58 AM. I don’t know if this is significant, but the only book in the Bible with the reference 3:58 is Lamentations 3:58, “You, Lord, took up my case; you redeemed my life.” Perhaps a reassurance that God will protect his children when the market does crash.

None of this is financial advice, just a dream for your consideration and encouragement.