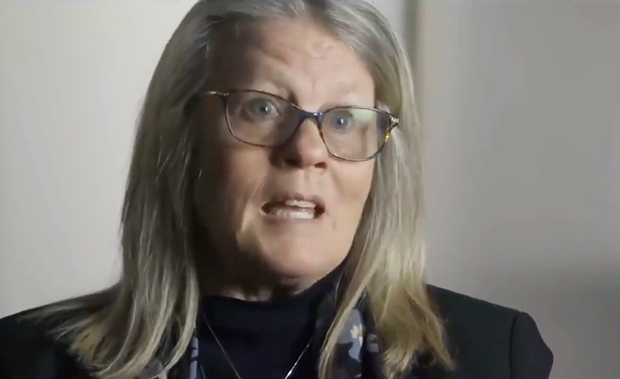 The 33-minute video shown below has been banned on YouTube, Facebook and other major media outlets because it presents warnings from many experts regarding dangerous health risks caused by the COVID gene therapy injections, which are being falsely called a vaccine in reports from our CIA controlled news media. The injections make changes to our mRNA (messenger RNA) to cause permanent damage to our immune system. The following text includes quotes transcribed from the video.

Although the long-term effects of the injections are unknown, Dr. Judy Mikovits, Ph.D., has made a dire forecast. She is the Director of the lab of Antiviral Drug Mechanisms at the National Cancer Institute and is renowned for her groundbreaking research in molecular biology and virology. Her 1991 doctoral thesis revolutionized the treatment of HIV/AIDS. Starting at the 27:35 mark, she stated:

“Most people don’t realize the vaccines do not prevent infection. You’re injecting the blueprint of the virus and letting a compromised system try to deal with it. And worse, it doesn’t go in the cells that a natural infection would, that have lock and key receptors, gatekeepers, so that only certain cells can be infected, like the upper respiratory tract for a coronavirus. Now you’re making it in a nanoparticle which means it can go in every cell without that receptor. So, can you imagine the damage of bypassing God’s natural immunity and allowing the blueprint for coronavirus that also has components of HIV in some strains, meaning you can infect your white blood cells. So now you’re going to inject an agent into every cell of the body. I just can’t even imagine a recipe for anything other than what I would consider mass murder on a scale where 50 million people will die in America from the vaccine. The numbers from the XMRV’s (xenotropic murine leukemia virus-related virus) and the vaccine injuries for the (past) 40 years support that.”

So Dr. Mikovits did not just randomly come up with her forecast, but based it upon specific research findings. She described it as “mass murder” which it certainly would be if her forecast is anywhere close to accurate.

Her warning that these injections can cause death is confirmed by Dr. Sucharit Bhakdi, an award winning researcher and former head of the Institute of Medical Microbiology and Hygiene in Germany and was a professor of virology and microbiology for 30 years in Germany. In the statement shown below, he warns that by taking these injections, killer lymphocytes already present in our body will cause an auto-immune attack with terrible consequences for our health and even death. Dr. Bhakdi made this statement:

“The big, big danger about this vaccine is you are shooting the gene of the virus into your body. It is going to go through the body and go to entering cells that you don’t know. These cells are going to start making, not the whole virus, but virus protein, and these cells are going to put the waste of that spike protein in front of their cells. And the killer lymphocytes will see the waste, and, you know, anyone who does not understand there is going to be an autoimmune attack because the killer lymphocytes are already there. It is with this that I will say, “Bye bye,” (death) because you don’t realize what you are going to do. You are going to plant the seed of autoimmune reactions. And I tell you, don’t do this.”

Dr. Sherri Tenpenny is board certified in emergency medicine and osteopathic manipulative medicine and author of several books on the impact of vaccines. When she was specifically asked about the forecast from Dr. Mikovits, she stated,

“If they don’t die, they’re going to be seriously injured. There are some things in life that are worse than death, you know, having to live with chronic inflammatory drug induced hepatitis, you know, having chronic seizure disorders, having debilitating autoimmune diseases. Some people are so sick it would be merciful if they died.”

More warnings come from Dr. Michael Yeadon, former Vice President of Pfizer with a PhD in respiratory pharmacology, and Dr. Wolfgang Wodarg, former head of the Public Health Department in Germany and a doctor of pneumology. They sent an urgent petition to the European Union demanding a halt to COVID-19 vaccine studies due to safety concerns. The specifically identified the following serious side effects:

These same two doctors documented their concerns in a 4-page report titled, “Will covid-19 vaccines save lives? Current trials aren’t designed to tell us”. Click the link to download the PDF file.

Also in this video, Dr Carrie Madej exposes troubling facts regarding Moderna, the company that developed one of the two vaccines currently available.

The Truth About Bill Gates:

This video also includes a video clip of CBS Evening News reporter Norah O’Donnell confronting Bill Gates regarding the vaccine testing results, saying, “Everybody (100%) with a high dose had a side effect.” Gates could not deny it.

Later in the video, (at the 25:35 mark) the facts shown below are presented, directly identifying Bill Gates as the primary financial backer behind previous vaccine disasters around the world:

“In 2010, Gates committed $10 billion to the World Health Organization (WHO) promising to reduce population, in part, through new vaccines. A month later, Gates told a Ted Talk that new vaccines ‘could reduce population.’ In 2014, Kenya’s Catholic Doctors Association accused the WHO of chemically sterilizing millions of Kenyan women with a phony ‘tetanus’ vaccine campaign. Independent labs found the sterility formula in every vaccine tested. After denying the charges, WHO finally admitted it had been developing the sterility vaccines for over a decade. Similar accusations came from Tanzania, Nicaragua, Mexico and the Philippines.”

In an essay written by Gates and published in the Wall Street Journal on January 16, 2019, he publicly admitted that his involvement in the vaccine industry is “The best investment he’s ever made.”

And in an interview with Chris Anderson, Bill Gates revealed his vision for the future of vaccines by saying,

“So eventually there will be sort of this digital immunity proof that will help facilitate the global reopening up.” (Quote starts at the 32:10 mark)

So the vision and ultimate goal shared by the primary financial backer for global vaccinations is to require every person in the world to provide digital proof of their immunity as evidence that they are not infected and have been vaccinated. When this same interview was later shared in a TED talk, that statement was edited out, almost as if someone didn’t want us to hear that.

The video also exposes criminal actions by the Center for Disease Control (CDC) by proving they are fully aware of the dangers, but are continuing to publicly promote the vaccines as being safe, as shown in an 8-page report that was almost completely ignored by the mainstream media. The CDC released the report on December 18, 2020 sharing results from the initial recipients of the vaccine. The report was titled, “Anaphylaxis Following m-RNA COVID-19 Vaccine Receipt” and written by Thomas Clark, MD. (Click the link to download a copy.) It includes the following statement:

“Less than a week after the vaccines were administered, 3,150 people had such adverse reactions that they were “unable to perform normal daily activities, unable to work, or required care from a doctor or healthcare professional.”

Another confirmation of the extreme danger comes from Dr. Theresa Deisher, PhD in Molecular and Cellular Physiology from Stanford University with over 30 years of pharmaceutical leadership experience including Genentech, Repligen, ZymoGenetics, Immunex and Amgen, warns about the dangers of manipulating our mRNA to make our body create the virus protein. She stated,

“I don’t believe that it’s desirable nor do I believe that it’s safe and certainly the data from the clinical trials where there is 15% of the healthy young, very healthy volunteers have significant side effects.”

Dr. Theresa Deisher also warned about the dangers of mRNA permanently re-writing our genetic code by making changes to our DNA.

“The vaccines that are messenger RNA (mRNA), what they do is they act like a virus and they hijack the cell’s machinery to turn that mRNA into the protein. Now, messenger RNA can also be what’s called reverse transcribed into DNA. Okay, an RNA virus uses a reverse transcriptase in our cells to make itself into DNA and permanently insert into the genome. Viruses can do that. There is a possibility that the messenger RNA could be made into DNA and be permanently inserted. It doesn’t have all of the efficient components of a virus but the spontaneous possibility is there.

“This vaccine is just not proven safe. It has been developed too quickly. We have no idea what the long term effects will be. It needs much more investigation. There is no hurry or emergency. It might possibly change your DNA. This is irreversible and irreparable for all future generations.”

Time will tell us whether Dr. Mikovits has forecasted accurately or not, but with so many warnings coming from so many experts, it should be enough to cause any reasonable person to at least investigate the facts before blindly proceeding any further. Unfortunately, anyone who follows the trail of facts will discover it leads to a very dark conclusion that contradicts the popular narratives we’ve been indoctrinated with our entire lives, making it very hard to hear the answers to these questions.

Could our government and other governments around the world be led by people so evil they would participate in promoting vaccines that are not vaccines but injections intentionally designed to harm and kill us? Could they be promoting the mass murdering millions of people?

The scriptures and the lessons from history answer these questions with a resounding yes. And these same two sources even reveal the identity of the culprit behind these evil schemes is the mother of all harlots, warning that “in her was found the blood of prophets and saints and of ALL WHO WERE SLAIN on the earth.” (Revelation 18:17)

These evil schemes have advanced unhindered because these truths have been hidden from us under cover of darkness. And the best way to destroy the works of darkness is by exposing it to the light. If you found this post helpful, please share it with your friends and family members.

The video shown below can also be viewed by clicking this link to Bitchute.com.