You are here: Home » News » Jesuit Agendas » Health Care News » Dr. Cameron Kyle-Sidell: “We are treating the wrong disease and we must change what we are doing.”
Share this post: 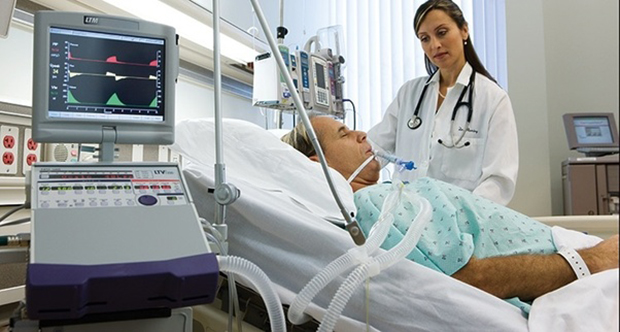 In the 6-minute video shown below, NYC Dr. Cameron Kyle-Sidell explains why he believes the medical community was lied to regarding the nature of the coronavirus. As a result of this deception, patients are being treated for the wrong disease, causing them great harm.

Cameron is an ER and critical care physician at the Maimonides Medical Center in Brooklyn, NY, where he has been working at the bedside of COVID+ patients. Based on his experience treating many patients suffering from the coronavirus, he concluded the entire medical community has been given false information, causing them to operate under a false paradigm that patients are suffering from a pneumonia-like virus when it is not that at all. As a result, physicians are treating patients for respiratory failure when there is nothing wrong with their respiratory system. He explains the real problem is oxygen failure, like being at a very high altitude where the air does not have sufficient oxygen.

“We are treating the wrong disease and we must change what we are doing if we want to save as many lives as possible… I fear that if we are using a false paradigm to treat a new disease, that the method by which we program the ventilator, one based on a notion of respiratory failure as opposed to oxygen failure, that this method, and there are a great number of methods we can use with the ventilators, but this method being widely adopted at this very moment in every hospital in the country which aims to increase pressure on the lungs in order to open them up is actually doing more harm than good. The ARDS that we are seeing, that the whole world is seeing, may be nothing more than lung injury caused by the ventilator.”

As reported in my previous post exposing two Jesuits leading our nation’s coronavirus response, the CDC initially sent contaminated testing kits to all state labs, causing a costly delay in our ability to respond to the rapidly spreading virus. And the video clip shared in that post revealed Dr. Anthony Fauci, director of the National Institute of Allergy and Infectious Diseases (NIAID), knew about this “surprise outbreak” three years ago. Other reports are coming in from doctors claiming they are being pressured to report the coronavirus as the cause of death in cases where the actual cause was unrelated, showing there is a real effort to inflate the numbers for the sake of fear mongering to manipulate public opinion. Now we have Cameron exposing the entire medical community has been lied to about the nature of the disease, causing them to do more harm than good.

All these facts point to the same conclusion that our nation is under attack from within, being manipulated by evil people with an evil agenda and no regard for human life, doing the same kinds of things they’ve been doing for hundreds of years. Only genuine repentance before God can deliver us from their schemes. (2 Chronicles 7:14)

They were saying that the ventilators are not working well against the symptoms !

I know that 5G is mentioned in the comments already, but wanted to share this paper from 2001 that supports Dr. Sidell’s conclusion about oxygen absorption, and specifically how fixed wireless communications can affect these properties.

I believe that the other key piece in this equation, is Huawei. Which brings us right back to China.

I was reading an article in the paper this afternoon regarding Covid-19. Evidently, Covid-19 can cause blood clots in the lungs of those infected and people are dying because of the clots. This virus is far more deadly than any have realized. Doctors are just now sharing these findings, trying clot buster medications along with blood thinners to try and save those developing the clots. In my mind, this virus has moved from Pandemic to Plague.

Well, there’s nothing really surprising about our medical community being misguided about something, is there? Don’t they screw up all the time? The whole low-fat and low-cholesterol movement was a farce. And remember that four out of five doctors used to prefer Chesterfields! Until they didn’t. Heck, we were still doing lobotomies, in office, in the 1950s. Our medical practice is still medieval, or rather, it is mass-produced on a Henry Ford industrial model of “one-size fits all”.. And discovery often comes on an “accidental” basis, rather than thinking something through. And then there’s the resistance of an entrenched human bureaucracy that fights those changes. So it’s very interesting to hear what this doctor is saying, and I’ll bet that no other medic has given it a thought. I hope it will get someone’s attention, and maybe change current practice for the better. It would be one meaningful advance to come out of this mess.

hello Every one…. I hope everyone is doing okay …during this C/V lockdown sure has us seeking Jesus face like never before…praying reading searching.. & Thank you so much to James & other contributors for all the input & tireless effort that goes into keeping these posts relevant to the times that we are living in & the prophetic gifts thru the Holy Spirit- ARE SO MUCH APPRECIATED… I SEE IT LIKE AN INCREDIBLE TIME OF FELLOWSHIP & GROWING IN ALL KNOWLEDGE OF OUR LORD & SAVIOUR & SEEKING TRUTH & DISCERNMENT IN THIS HOUR..

this is another health video I found today 18 mins long.. re ICU nurse tells the TRUTH.!

Check out the first 15 minutes of this video below

(Donald Trump admitted that the Corporate Media is instilling FEAR into the people.)

Excellent information from this ICU DR.. he is certainly awake & alert..pray for this Drs protection as the dark side would not like this information being received: or getting out !! It May Say Lives……

What a brave & dedicated passionate Dr.

This article and the following video (from David Icke’s website) seems to confirm an earlier article on this website as well, except that it is NOT a virus in the first place ! :

I am not a medical person at all but I have many questions that perhapes only God has the answers for.First of all,in the artical where the whole blame is put on 5G I can see that there is an agreement between what the artical on 5G says that this in not pneumonia and this is what this Doctor says also.Both say it is a lack of oxygen.
But contrary to what the 5G artical says,it is a virus that is highly infectious.That is a fact.All I can say is that we know the elite behind the scenes are lying to us and that there agenda is to reduce the world population.We dont need to be concerned at all as Christians because God is on the Throne.

David Icke’s points are that Koch’s Postulates have not been applied to COVID-19, that the characteristics of the entity are identical to disease- and stress-related exosomes, that the PCR test measures exosomes’ genetic material, that the level of infections/test results are manipulated by the degree of PCR amplification to, again, measure endogenous exosome genetic material. I think Mr. Icke has valid points. Here is a link to the original PowerPoint David refers to:

The NY Daily Post reports today the latest symptom of “COVID-19,” is a fizzing or tingling all over the body. That sounds like it could be frequency related. My bet is that the affected USA aircraft carriers have 5G in place. Metro NYC has a very high density of 5G towers ( I heard 184, Atlanta has maybe 20?).

Check out the above link. Interesting it came out of Johns Hopkins, but the presenter has left that institution.

More and more medical professionals now focusing on the hemoglobin’s ability to transport oxygen in regards to how COVID19 damages people should really make you think as this is the EXACT original claim of the 5G theory.