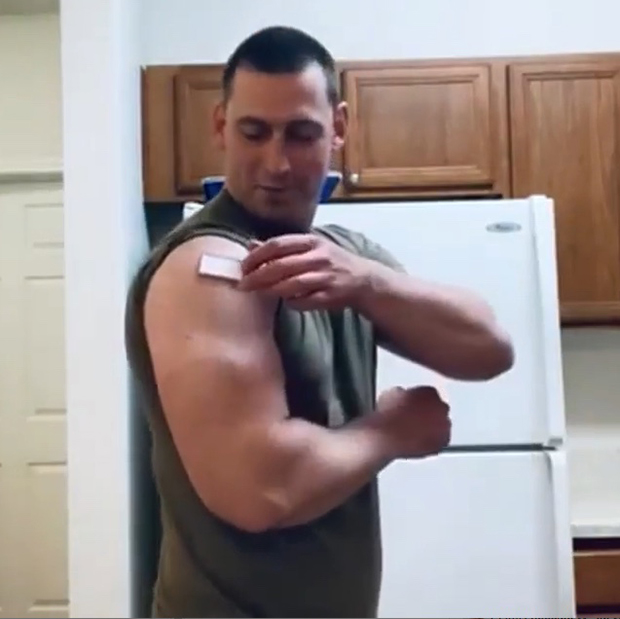 Although our federal government health agencies have repeatedly assured us the COVID-19 injections are “safe and effective”, the three videos shown at the bottom of this post contradict that claim with disturbing evidence that many people have been effectively turned into human magnets. The videos show these people are mostly amused by their new magnetic bodies, but this post explains why it poses a serious danger to their health.

The mainstream media “fact checkers” are in full warfare mode attempting to discredit these claims. They’re even sharing testimonies of vaccinated people who have not had any symptoms of being magnetized, which is great to know it’s not happening to everyone, but the fact checkers are ignoring the large number of video testimonies proving it’s really happening to lots of people, as shown in the three videos below.

Victims share similar experiences with their bodies taking on magnetic properties soon after receiving the injections, starting in the area on their arm where they were injected and then spreading to other parts of their body. By replicating throughout the body, the experimental mRNA injections are doing exactly what they were designed to do as revealed in public statements from their producers, which is to modify our genetic code through messenger RNA instructions replicating the instructions to every cell in our body.

The most obvious danger of increased magnetism is that it attracts increased metal content. While the video shows large metal objects adhering to the outside of the victim’s bodies, metal content also exists in sizes so small it is invisible, micro and nano particles which are small enough to enter our bodies by being ingested, inhaled, or even absorbed through our skin.

Our bodies do not naturally include any metal content which is a good thing because studies have shown microscopic metals inside our body cause inflammatory reactions which are harmful to our health because it interferes with normal bodily processes. Although metal by itself is not considered poisonous, it effectively becomes poisonous when it enters our body in sizes small enough to be carried throughout our body in our blood stream. And our immune system cannot destroy or eliminate it because it’s not biodegradable, so the damage becomes permanent. So being magnetized poses a serious health danger.

Although metal content can cause damage anywhere in our body, numerous studies have linked it to neurological and brain damage, causing some scientists to believe it is the cause for disorders like Autism, Attention Deficit and Hyperactivity Disorder (ADHD), Alzheimer’s, mental retardation, and other kinds of learning disorders. I find it interesting that these disorders were virtually nonexistent prior to the 1960’s, which is about the same time as the start of widespread vaccinations.

The connection between harmful metal content and vaccines was proven by a 2016 research study conducted by Italian scientists in which they reviewed the ingredients of 44 types of human vaccines and discovered heavy metal debris and biological contamination in all 44 of them. Their report stated, “The quantity of foreign bodies detected and, in some cases, their unusual chemical compositions baffled us.” They then drew the obvious conclusion, namely, that because the micro- and nano contaminants were “neither biocompatible nor biodegradable,” they were “biopersistent” and could cause inflammatory effects right away or later. (Source: medcraveonline.com)

These Italian scientists were baffled by their findings because by law, vaccine producers are required to identify all ingredients, but none of these vaccines identified any metal content. Yet, they contained all sorts of “micro-, sub-micro- and nano-sized metals”, including Aluminum, Lead, Iron, Zinc, Titanium, Chromium, Tungsten, Bismuth, Silver, Calcium, Silicon, and many different combinations of other metals.

How could this happen? If they had found metal pieces in only a few of the 44 vaccines, we might reasonably conclude it was due to an unintentional mistake, but 44 out of 44 indicates something far more sinister. And it appears the COVID-19 injections have just taken it to another level.

Since there were no long-term tests conducted before rolling out the COVID-19 injections, disturbing reactions like this are just beginning to surface, which should be enough to raise questions about what else will be discovered in the coming months and years. As I shared in a previous post, many scientists who have spent decades studying these topics, have warned about life threatening dangers, including the destruction of our immune system. The CDC’s own data through June 4, 2021, already shows over 329,000 reported adverse reactions in the United States, including 5,888 deaths, making it far more dangerous than any previous vaccine. (Source: openvaers.com)

To anyone considering getting injected, why not wait to see what else surfaces? For more information, I highly recommend studying the facts presented in our Vaccine category, which already includes about 200 posts and growing daily. Beyond that, I recommend seeking God about this and not proceeding unless He clearly reveals it is safe to proceed. However, since He is a loving Father, I don’t believe He would give any of His children that assurance.

The three videos shown below are all parts of a series prepared by Tim Truth. He put together many short clips of people who have received the COVID-19 injections all demonstrating their body’s new magnetic properties. The videos are 58 minutes, 47 minutes and 93 minutes, for a combined total of 198 minutes.