You are here: Home » Prophecies » “I will use you to deliver My people out of Egypt.”
Share this post: 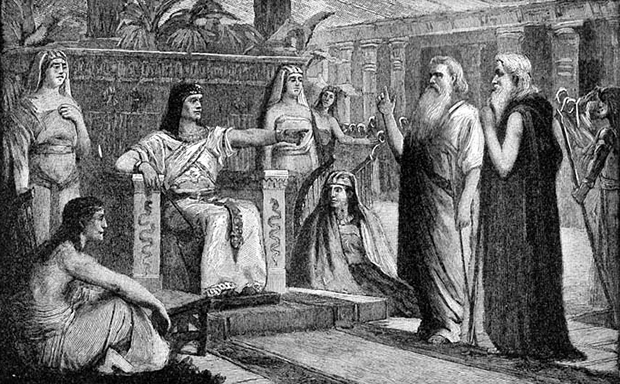 Last night, we had a heavy thunderstorm with a lot of lightning. I asked the Lord why this was necessary. He brought me to Exodus 9:23. The Lord brought thunder, hail and lightning flashing to the ground to destroy his enemies. Moses simply obeyed His word by stretching a rod toward heaven. Once again it is time to stretch forth your rod. Jesus is about to do amazing wonders among us to show Himself strong over Egypt. Pharaoh’s regime is coming down.

In the book of Exodus, The Lord appeared to Moses in a burning bush and asked him to go to Pharaoh with a word from the Lord. Moses replied, “But suppose they will not believe me or listen to my voice; suppose they say, ‘The Lord has not appeared to you.'”

Then He said to Moses, “What is that in your hand?”

The scripture goes on to say how the Lord commissioned Moses along with Aaron to deliver the Israelites out of Egypt. Although He released miracles, signs and wonders, Pharaoh resisted the word from the Lord to “Let My people go” until The Lord sent ten plagues on Egypt. He also sent a mighty east wind and used Moses with his rod to part the Red Sea for the children of Israel to escape. They went through on dry ground unscathed, but when Pharaoh and the Egyptian army along with their horses and chariots followed after them, they all drowned.

“I will use that which I have placed in your hand. Do not say that I am the least of these or I am unable to speak. I will establish you and speak through you. Do not worry beforehand, or premeditate on what you will say, but speak whatever is given to you at that time. For it is not you who will speak, but the Holy Spirit. Your words will be spoken from a place of authority.

I will use you to deliver My people out of Egypt. There will be a mass Exodus of people coming out of spiritual Egypt, released from the kingdom of darkness, and delivered into the Kingdom of light. When it seems like the enemy is gaining on you, you will outwit him as you raise your rod of authority and watch the seas part. The plans of the enemy will be demolished. You are about to cross over into a new dimension and you will surely see My goodness in the land of the living,” says the Lord.

And Moses stretched out his rod toward heaven; and the Lord sent thunder and hail, and fire darted to the ground. And the Lord rained hail on the land of Egypt. (Exodus 9:23)

And Moses stretched out his hand over the sea; and the Lord caused the sea to go back by a strong east wind all that night, and made the sea dry land, and the waters were divided. And the children of Israel went into the midst of the sea upon the dry ground: and the waters were a wall unto them on their right hand, and on their left. And the Egyptians pursued, and went in after them to the midst of the sea, even all Pharaoh’s horses, his chariots, and his horsemen. (Exodus 14:21-23)

“Trump warns Senators to not let themselves be influenced by Soros and his evil forces. Wow! Are the gloves ever off! A course for collision has been set.”
http://www.thecommonsenseshow.com/the-end-game-of-the-extreme-left-has-been-set-into-motion/

Monroe Doctrine and what appears to be a US invasion of Venezuela: Dave Hodges reports, “I have been told by an “agency” source to refer to Trump’s UN speech. He proclaimed the importance of American sovereignty as opposed to globalism which dominates world leaders. However, embedded in the speech was a scant reference to the Monroe Doctrine. This kind of protectionism is apparently being used to legally justify what appears to be an American invasion and regime change in Venezuela. In executing this invasion, Trump is clearly supporting the globalists economic interests against the Chinese and very possibly the Russians. The BRICS alliance flies in the face modern globalism.

I have often said that the BRICS vs. Western-Rothschild dominated banking nations would form the two sides for World War III. Occupation of Venezuelan oil fields could very well tip the economic balance of power. If this is the case, then clearly Trump is supporting the Rothschild banking interests. Why would he do that? It may be the only way that Trump can maintain his economic recovery. The Fed keeps raising interest rates and this is cutting into American economic recovery. In short, Trump is getting squeezed on both ends. The Fed on one hand and the growing menace of the BRICS on the other are pushing this President to act. It would appear that Trump’s planned invasion of Venezuela has covert UN backing.

I want to clearly point out that the Venezuelan economy and diminishing food supply was the original work of then Secretary of State Hillary Clinton and former President Obama. I previously covered on The Common Sense Show, that Clinton blackmailed Venezuela’s neighbors to cut of trade and mostly stop any shipment of food. Clearly Clinton was using food as a weapon against Venezuela. It is my belief and the belief of some of my sources that Trump inherited this problem is trying to make the best of a bad situation.”

Dave Hodges reports Chinese, Russian and American naval armadas are off the coast of oil rich Venezuela. “From the intelligence I am getting from my sources, this force in the first video is an American coalition which includes the UK (start at about 3:20). In the video following, I am told these are the Chinese vessels and very possibly are accompanied by Russian vessels. At stake is Venezuelan oil which is substantial. And don’t forget, the Chinese are a huge oil importing nation and they just cut off of the importation of American oil. They are obviously counting on Venezuelan oil.
An update was issued recently and it showed that in addition to the forces on the north side of Venezuela, there is an armada of ships on the east side of Venezuelan. The unknown factor is which fleet is the offensive and which is the defensive fleet. I further have been told that the Venezuelan military has been rushed to the border of Colombia in anticipation of an invasion. There are also reports that the Chinese military is flooding into Brazil, a BRICS ally in preparation for the conflict. This would strongly suggest that the Venezuelans are also expecting an American led land invasion with the prize being the oil.”
http://www.thecommonsenseshow.com/is-there-an-october-surprise-looming-off-the-coast-of-venezuela/

Dave Hodges explains how the FBI is in absolute defiance of presidential authority here: http://www.thecommonsenseshow.com/the-fbi-in-absolute-defiance-of-presidential-authority/

Mike Adams of Natural News explains coming National Emergency, Martial Law and coming civil war for those who need to get caught up on what is really going on. https://www.youtube.com/watch?v=ZWkDbkODQPk

Judicial Watch Uncovers George Soros-Open Society Foundation-Obama State Department Collusion
CorruptionDeep StateNewsNWO TyrannyPolitics
October 8, 2018 0
by Catherine Frompovich, Activist Post:
Back in May of 2017, Judicial Watch filed a Freedom of Information Act (FOIA) lawsuit against the U.S. Department of State and USAID after both failed to respond to a former FOIA filing of “March 31, 2017, FOIA requests (Judicial Watch v. U.S. Department of State and the U.S. Agency for International Development (No. 1:17-cv-01012)” regarding documents pertaining to funding George Soros activities and his ‘philanthropic’ financing to topple governments known as “Open Society Foundations.”

Recently JW received 49 pages about that, which can be accessed here.

A Bulgarian journalist who reported on an investigation into alleged corruption involving European Union funds has been murdered in the Danube town of Ruse, authorities said on Sunday.

Thanks for sharing. Here is a link:
https://www.reuters.com/article/us-bulgaria-murder/bulgarian-investigative-journalist-killed-authorities-say-idUSKCN1MH0YW

The sad part of this huge breakthrough as voiced by Dennis Nunes is that President Trump promised the congressional investigators three weeks ago to release all of the requested documents unredacted but was shortly afterwards visited by a FBI-DOJ delegation at the WH and since then nothing has been released. Denis Nunes shirked his shoulders and grimaced when he confessed this to Maria Bartrinoma. This is because the corruption is so ubiquitous that it will take martial law and the arrests of 50,000 swamp creatures to even begin to clean up the mess. This may happen but there is the danger that the elites will either crash the stock market or start WW III to avoid the hanging tree. Secondly, this is so BIG that it’s really a job for Jesus Christ at His return. It’s called Judgment Day.

Gustavus, I agree ! So many things done in secret are about to be revealed..
Jesus’ words : “ For there is nothing hidden that shall not be disclosed, nor anything secret that shall not be known and come out into the open”. Luke 8, 17.. God is doing it !

I see you following the American political scene closely. Have you done so for long? If so, would you know anything about if there was or is some kind of mystery or secret surrounding JFK that was covered up? In which case, was or is there an investigation or expected disclosure of some kind? I don’t know if I imagined it or not, but I distinctly remember seeing some kind of news about this and am curious to know if you have heard anything like it.

The JFK assassination was covered up just as 9-11 and America’s entry into every war in the past hundred years. Scripture tells us Satan rules the world, the whole world is corrupt and deceived and man has a fallen nature. The president, after promising to do so, has been stopped from releasing the documents from the FBI and DOJ that Congress has requested because the corruption is so ubiquitous that tens of thousands would have to go to jail or be executed. Even people like Sessions and Kavanaugh are afraid of the truth coming out. It would become like the Nuremberg Tribunal and last for years. Jesus will clean things up shortly.

Thank you for sharing this information, Gustavus, especially this part: “The president, after promising to do so, has been stopped from releasing the documents from the FBI and DOJ that Congress has requested because the corruption is so ubiquitous that tens of thousands would have to go to jail or be executed.”

It is confirmation for a dream that I had.

Today Maria Bartiroma reported on FOX that James Baker, who was the #1 attorney in the FBI, reporting directly to James Comey, made the bombshell revelation this past week to the Congressional Intelligence Committee that the DNC had been feeding “evidence” directly to the FBI who in turn used it to obtain FISA Warrants in late 2016 to wire tap the Trump campaign of which several DOJ and FBI officials under oath have denied ever happened in sworn testimony. “This is absolute proof that this was not told to the FISA judge to get the FISA Warrants”, says Congressman Denis Nunes. This could be the smoking gun that will break wide open the corruption story of the century and start the arrests of the 50,000 sealed warrants. It is unethical, to say the least, for a political party to use top FBI and DOJ officials to bring down an opposition candidate for the presidency of the United States.

Such a good and powerful word Elaine