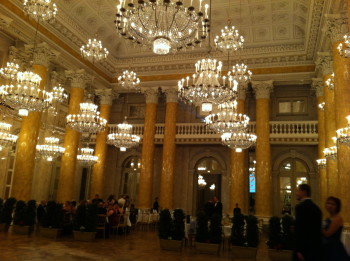 I awoke just after 1:00 am on June 11, 2014 from a dream which still haunts me. I was with three or four other people, and we were all just standing and talking quietly. We were in a very large, ornate room, sparsely but very expensively furnished only around the perimeter. It looked as I would imagine a ballroom in the White House or a European castle with marble, gold-leafed moldings, huge crystal chandeliers, matching wall sconces, and antique tapestries.

I don’t know what building we were in, but I know we were in America, in the future. There was another small group of people standing off in a far corner of the room, and they were carefully watching us. They looked like military soldiers or guards. They wore dark-grey uniforms and they were in charge. They looked at us with tolerance but distrust. For our part, we kept a wary eye on them too, and were careful not to raise an alarm. We were all actively engaged in our conversation, but we kept it quiet, subdued.

The strangest thing about the dream is that everyone in my group, including me, was speaking fluently in Russian. Now I only know how to say three things in Russian: yes, da; no, nyet; and thank you, spasibo. Hardly enough for a conversation!

The people with whom I was conversing in Russian were all political big-wigs, like senators or governors. They were basically there as diplomats. I don’t know their names or titles, or what we discussed. But I do know that we were all “invited” (commanded) to be there to meet with the current leader of the country. We chatted while waiting our turn for an audience with the leader. Some of these were representatives from the old government, and some from the new.

Even in the dream, I marveled that I should be included in such limited and exclusive company, and wondered what on earth they could want from me.

As I puzzled over it, I asked the Lord, “What was THAT all about?!”

And almost before my query was completed, I instantly knew the answer: “RSA.”

Huh? Shaking my head at the enigma, I asked again: “RSA? RSA? What on earth is RSA?”

That was beyond my ability to comprehend at 1:00 in the morning, and I fell back asleep. But over the next couple of days, the Lord revealed it was a prophetic warning. Not a future absolutely set, but one that will come about unless we take a stand and pray to prevent it.

I have asked the Holy Spirit to confirm whether these events are firmly set or just a prophetic warning that can yet be forestalled, but all I feel in my spirit is a sense of foreboding.

Debra, I had Russian dreams from 1996, 1998 before David E. Taylor was guest speaker at Faith in Action Church in 2004, told us about the Russian Invasion, then in 2007 I had another dream about this hall.

1st dream was about running and playing with young friends in a sunlit area that seemed to be St. Petersburg .
Why was I there, I don’t know.

2nd dream 1998- I woke up in my old bedroom and walked downstairs when I looked in this other room and saw two half-Russian daughters who were Afro American (from me). I sat in the livingroom watching basketball. And a young half-Russian boy walked from the kitchen to the livingroom.

ALL prophecy must be held to the standard of God’s inerrant Word, the Bible! That’s such a “given” for me that I forgot to point it out, but I certainly should have. Any prophecy that contradicts the principles laid out in the Bible is not from God. Thanks for the reminder, James.
Love & God bless,
:Debra <

Elaine, your skepticism is good; the Bible tells us that many false prophets will arise. And not believing everything you read just because it was in print is smart anyway. But to answer your question: Throughout my life, I have known details and “small” things before they happened – but these have been things that affected only me or people close to me, so nothing there that you can independtly verify. Then there have been people at my church or on the street that I have prophesied over – still not verifiable by you. In fact, this is one of the first prophecies God has given me for a body of people, and it remains in the future. But before you dismiss me with a snort and “Yeah, I thought so!”, I appeal to you to verify in a different manner: search the web for other prophecies about Russia attacking the US. There are a host of them, several elsewhere on this site alone.

Sounds like just a dream. When has anything else you “prophesied” come true?

Erick, you are so right!

II Chronicles 7:14 is our guide: “IF My people, who are called by My Name, will humble themselves and seek My face and pray and TURN FROM THEIR WICKED WAYS, THEN I will hear from heaven and forgive their sins and heal their land.” (Emphasis added.) So we need to do ALL those things. It sounds like a tall order, but born-again Christians have the Holy Spirit within to make it possible.

I pray for God to turn our hearts back to Him, and for Revival, virtually every day. Please join me. Christians need to remember that prayer is warfare against evil, and releases God’s spiritual forces to fight for us. But prayer without repentance (turning away from our wrong-doing) is robbed of much of its power.

I look to God’s mercy – He forgave Nineveh when they repented, and He was willing even to forgive Sodom and Gomorrah if only 10 righteous men could be found in those cities. How many righteous are needed to forgive our country? I don’t know, but I think it’s a good idea for each of us to live as if we were the “10th.”

Debra, Perhaps I would add more to your comment that we need to pray against it. We need to repent as a nation and church. We the church need to turn away from our fornications, pornography, abortions, and casual lukewarm christian living that is in acceptance and toleration of the abominations of the world and sin in our own camp. The salt has lost its savor and could we really say that we are a light on a hill? Praying is a good start but what of the men like John the Baptist that call the body of Christ to repentance and we see the fear of the Lord come back in the church. We need a great awakening!! The nations of the world drink from the abominations of our cup and are drunk on it. The only way the filth and sin will stop is to have a Great Awakening.