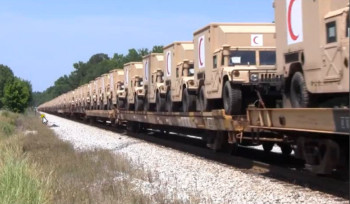 Somehow I knew what was going to happen, like a vision within the dream. Everyone was to be evaluated and given a number, 1 to 9. If you had a lot of money (like hundreds of millions of dollars), or if you had a job they wanted (like some particular kind of doctor), then you were 8 or 9. Homeless were 1, with everyone else in between.

I saw people being called in from their homes or work for the numbering interviews. People came as commanded by the armed soldiers (we were under martial law), and stood in single file awaiting their turn. The interviewers sat at long, folding tables while the people slowly walked by them. At the first table, people were given a questionnaire that asked things like name, address, and family members. At the second table, the interviewers asked a very few, pointed questions, and then assigned a number to each person based on their answers. The whole thing made me think of the Jews being similarly interrogated upon arriving at one of Hitler’s “work camps,” except that in this vision we were clothed and not naked. The attitude of the interviewers though was pretty similar to what I imagine the Jews went through.

An almost kindly person at the end of the table gave each person their number. He thanked them for their cooperation, and told them to proceed through the door; that they could go back home or to work now. But as soon as they stepped through the door, their number was checked by another person. If the number was 8 or 9, they really were allowed to go. But everyone numbered 1 through 7 was instead immediately loaded onto a desert-sand colored, military panel truck* under guard. It looked just like the one shown above (but without the red crescent insignia). The people were fed some lie about where they were going, for how long, and why. The people, by now long used to having their lives run by the military, believed the lie and complied.

As soon as the truck was full, it was driven away, the people inside were summarily executed and their bodies off-loaded. The truck then returned for cleaning and another load. I don’t know where the people were taken for execution, or even how they were murdered. The Lord only let me see their faces. They were all totally surprised when it happened.

In my dream, I wanted to warn people while the numbering was just beginning, but there was a problem. From the vision, I knew that if you were caught warning others, you were executed immediately, right on the spot, regardless of your number. And “Big Brother” spy cameras were everywhere. All those traffic cameras, traffic-light-violation cameras, business and residential security cameras were controlled by the government and used to spy on people. The government even used the cameras and microphones in our homes to spy on us, like those on computers, new TVs, and thermostats.

Facing a small group of my friends, I started to warn them; “We are all going to be prioritized and numbered,” but then I remembered the fate of anyone caught warning others, so I stopped speaking. I spotted someone watching us intently, so I started to move the group outside where we could talk. Before we got outside, a doctor in our group was taken away because she was needed. The rest of us wandered around outside, as I was looking for a camera-free zone, to where we saw one of the death trucks being washed, by someone who had no idea what they were washing. Still anxious to warn my group, I woke to the alarm clock.

* The trucks in my vision looked exactly like those in the convoy on this video, except that they bore no insignia in my dream:

Important caveat: the person narrating this video clip claims that the red crescent identifies the vehicles as Iraqi, but a search for “red crescent” identifies it as an emblem for a humanitarian aid society, the Islamic version of the Red Cross.

Lynx, forgive me for making you wait; it’s obviously been much too long since I checked this old post. The Holy Spirit did not give me a precise time frame when I wrote this post, nor is He now. But we have clues: Martial law will have been in place for a long time – over a year anyway. The earliest I can imagine martial law coming about in any kind of widespread fashion would be in response to the upcoming attack on our churches. (See the post by Nicole Moore yesterday, Islamic Plot to Murder America’s Christian Children Revealed.) I THINK that the attack and beginning of martial law will be this year. This is not revelation, but logic. Too many other prophets are seeing chaos this year, and martial law is the inevitable response to widespread chaos. See James’ new post from yesterday, Terry Bennett: Cauldron of Chaos Begins in August 2015, for an example. Then there’s Jade Helm 15, with all branches of our military conveniently conducting exercises (or possibly getting ready for martial law?) in several states through 9/15/15. All that said, it’s also possible that martial law will be declared, ended, and declared again – Who knows how many times before it’s long-standing? So all I can say with surety is that these executions must be at Least one and a half years away. … I received additional revelation while writing this response: This will NOT happen everywhere! Remember, the USA is a big place. A military campaign conducted in one area may be carried out at a different time, in a different way, or not at all in another area. I posted in a comment June 17th under my post, Prophetic Dream: American Citizens Hiding as Refugees to Avoid FEMA Camps, that in some fashion, the country will be “divided up” among different conquerors. It would be reasonable to expect that That will be at least a few years down the road (probably less than seven). So if this happens after or during war with multiple countries, that would put it significantly more than 18 months away. Now then, Lynx, if you are asking (as I sense) because you are thinking of leaving the country and are trying to figure out when: Ask God. If you hear His voice and commit to do as He instructs you, then He will tell you through His Spirit if and when He wants you to leave. If He says to go, then go when and where He tells you. He might call you to stay, because He has plans to use you for the Kingdom here. You may be important to the coming Third Great Awakening and Revival, for example. If you are righteous in His sight, He will keep you alive and safe. Learn and claim His promises!

Thank You for telling us this! Can you tell the timing when will this happen? Will it happen the next couple years?

Sorry I didn’t see your query until just now. Only adults were being interviewed in my dream, but they made note of all family members represented by those adults.

Quick question: was it only adults being interviewed or whole families?