You are here: Home » News » Jesuit Schemes by Nation » Israel » “The Days of Trouble Have Now Started.”
Share this post: 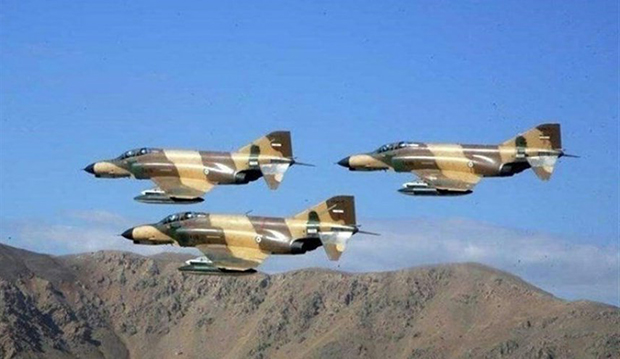 During prayer time today, the Lord gave me a vision. I was in the air, about 20 feet or so above the ground and somewhere on the eastern border of Israel. I saw about 30 to 40 Iranian jets flying low and fast into Israel. They were quickly joined by about 20 Syrian jets that came in along side of them.

The planes flew in swiftly and closed in on their targeted cities. I then saw the Israeli Air Force in flight to intercept the enemy planes. However, they had not been alerted soon enough, and the Iranian and Syrian planes managed to reach the targeted cities and drop their payloads before being shot down. I saw tremendous smoke rising up from the cities, and the Israeli jets had shot down all of the enemy planes.

I understood the Lord to say, “This was a planned suicide mission, and Iran and Syria intended to lose their planes and pilots in order to accomplish their mission of killing as many Israeli people as possible in the raid.”

I then heard the Lord say, “Damascus will be a ruinous and burning heap and never inhabited again.” End of vision.

“My son, the days of trouble have now started. Watch and see what will come now. In the days ahead, I will move many into the Fire of My Holy Spirit. I will move on pastors who have been seeking Me. I will move on My People who have had their faces on the ground before Me, crying out for revival in their cities. I will pour out of Myself an anointing so strong people will wonder what has happened. Those in the dead churches will now have their thoughts on how to stop this nonsense, for those walking in the power of My Spirit will show signs and mighty wonders.

My son, the days are now here that I have been warning about. The wheels of prophecy will now be completed, and My return is near at hand. Tell My People I am coming soon, BE READY! Be not sleeping, but watch all things and know the time is now.

Even though My watchmen and prophets are sounding the alarm and shouting to wake up, the sleeping Church is not responding and will be caught asleep and unaware. My son, time is now of utmost importance, for all things will change in an instant. I love you, keep in My Word, delusion is here.”

Scripture Reference:
1 The burden of Damascus. Behold, Damascus is taken away from being a city, and it shall be a ruinous heap.
2 The cities of Aroer are forsaken: they shall be for flocks, which shall lie down, and none shall make them afraid.
3 The fortress also shall cease from Ephraim, and the kingdom from Damascus, and the remnant of Syria: they shall be as the glory of the children of Israel, saith the Lord of hosts.
4 And in that day it shall come to pass, that the glory of Jacob shall be made thin, and the fatness of his flesh shall wax lean.” (Isaiah 17:1-4)

There was an airstrike in Syria last night. Several markers showed up in an article. “So far nobody has claimed responsibility for the massive airstrikes. Media outlets affiliated with the Syrian opposition claim 38 government soldiers were killed in the strike in Hama, with an additional 57 wounded.”
https://www.zerohedge.com/news/2018-04-30/syrian-army-enemy-rockets-strike-2-bases-11-iranians-killed

Netanyahu has given a live address on Israeli tv, displaying masses of intel on Iranian nuclear developments. There seems to be a news blackout in the West on main media concerning the most recent Syrian strike. It was an underground Iranian missile bunker.

I see what you mean about a news blackout in the West. Zerohedge has been writing articles covering the story, but I don’t see the MSM bringing it up. Jackson had a prophecy about there being “mystery explosions” before a Israel/Iran conflict. Israel’s policy is to not comment on military strikes, so there have been a lot of mystery explosions in Syria that have been attributed to Israel.

Yes there was a news blackout, which is a great example of how we are being manipulated.

Tel Aviv gay pride parade – part of a week of “celebrations” – is June 8th 2018. Haifa will celebrate their 12th annual “Haifa Pride” this year. Pray that God will forgive their grievous sins.

Not saying that this word isn’t true, because it could happen, but it would take multiple critical failures on Israel’s part for this to occur. They have the most hyper-sensitive airspace detection systems in the world. Bar-None. They know how many feathered birds are flying in enemy territory near the border at any given time. Those F-4’s & F-14’s give off radar cross sections the size of a Boeing 777 and Israel has special radar arrays designed just for low valley entries. Israeli scramble times are also the shortest in the world because they know they don’t have time with their narrow country. Someone would have to literally fall asleep, or the systems would have to be offline somehow for this to occur. Just this past year they detected irans stealth drone (US Copy)and scrambled slow helicopters to shoot it down before it could get anywhere.

Joel , Sadhu Sundar gave a prophetic word last year, and he said that Israel was going to be attacked by surrounding Arab countries in 2018. He said that Israel will suffer loss at the beginning of the war because they are relying on their military might instead of relying on God. He said that there will be many Jewish people who will die …but in the second phase of the war, God will come to their rescue and they will eventually win the war. They will even expand their territory and fulfill God’s word.
I find this article confirming the word that God gave to Sadhu.

The other day in Tel Aviv some F 15s were playing cat and mouse along the beach sky and a practice air raid siren went off. Some of the beach people thought it was a real dogfight. They started running from the beach like crazy. Most knew it was practice because they read the newspaper. They were training for the 70th Anniversary with an air show. Wow! what an air show above Jerusalem… F15s, F16s, Cobra choppers, and much more. What raw airpower!

Byron, Glynda Lomax has a powerfull word that seems to back up yours.

I attend a pentecostal church. Seldom have I heard of the rapture being a NOW PHENOMENA, that Christ could return SUDDENLY for His bride. Seldom have I heard of the need to pray for Israel, this in spite of the fact about a few blocks down the road pro Palestinians carry protest signs every weekend. I dont trust Iran or Syria. Everything you stated here seems very plausible. Im thinking what will it take to wake up a sleeping church to the urgent need to win the lost around us? will it take a financial collapse, an earthquake?or a lightning bolt to fall from the skies?

Satan’s job is to steal, kill, and destroy and he doesn’t care how he accomplishes it or how many humans he takes with him to destruction. I can totally see a suicide mission taking place. After all, the Koran promises 72 virgins for the men who are suicide bombers. Satan convinces people through lies to believe in a gospel of death. Jesus preaches a gospel message of love, hope, and forgiveness. What a stark contrast. Sadly, this battle will rage on till Satan is thrown into the lake of fire. Praise God, I choose life!

Sharing this n my blog. Thanks.

4/19/18 Dream: I was taken along a path. There were people camping on the left and right side of the path. It was lunch time, and I found a man selling fish sandwiches. I asked him what kind of fish he had? He said Noah. He made me a Noah fish sandwich with a bag of green onions.

As in the days of Noah

Byron, quite powerful dream, yet totally believable in today’s war stance with so many countries. The 2 countries involved you mentioned plus the suicide mission is so plausible. Either the pilots would know know it was a suicide mission or they would have been volunteers for a mission such as this.