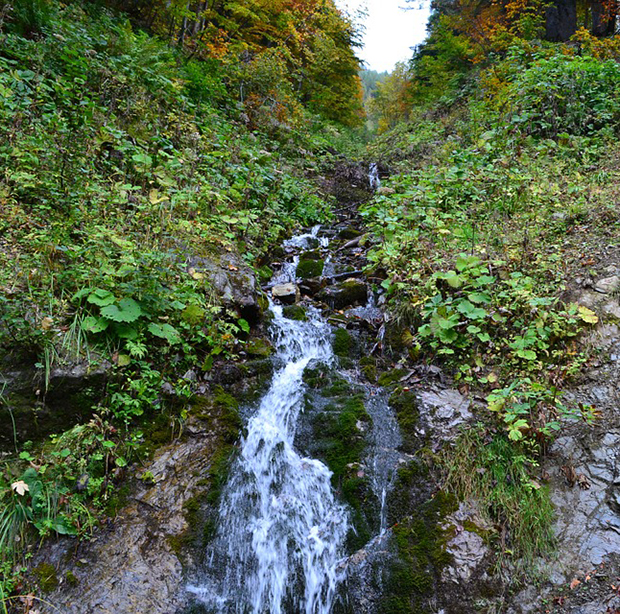 Monday morning the Holy Spirit said to me, “The days of trepidation start now.”

He gave me this scripture:

Men fainting from fear and the expectation of the things which are coming upon the world; for the powers of the heavens will be shaken. (Luke 21:26)

I don’t know exactly how this might tie in, but this was all flowing together yesterday morning. Last year, the Holy Spirit told me, “It will start with a trickle, then a stream and then a torrent.”

After I was told that about days of trepidation, in my spirit I saw a stream that was just a trickle because rocks were piled up hindering the flow. The rocks were being removed and the stream began to flow.

I also knew this would be a time of promised resources released for God’s purposes and that it was imperative for us to acknowledge that God alone is in control and provides all that we need as an act of humbling ourselves before Him.

I was reminded of this scripture that speaks of the mountains falling into the sea and knew that even if we see such events, God is in control.

Michael Perritte was born in Munich, Germany and grew up from coast to coast in the United States. Although raised in church and called at a young age, he ran from the Lord and lived a rebellious, wicked life for many years. Remarkably the Holy Spirit continued to pursue him with the call from his youth. He humbly recognizes God has called him for this time and hour. He has a great love for the church although he recognizes many, if not most, are not prepared for what’s coming. His heart is to see the body armed and ready for this hour in history, to see prodigals come home, and the eyes of the blind open. Worship with music is huge to Michael and he has been a worship leader/lyricist for several years. Over the past few years, dreams, visions and hearing the Holy Spirit has greatly increased. His greatest desire is simply to say and do what the Father would have him to and to know Him.

Thank you for the encouragement and some clarity to the loneliness thing. This group of Christ followers is absolutely amazing! Thank you James for the platform.

There is a scripture that says, “I have never seen the righteous forsaken, nor his seed begging bread.” I am 68 years old, and throughout the years have gone through many traumas and trials. This I do know, you can be in one of the most horrible situations of your life, and the Lord will fill you with the peace that passes all understanding. You will be amazed at the things the Lord will do for you without even asking. He is there, and will be there in a very real, and powerful way. He will let you know he is there, as he manifests his spirit. Your encounters with Jesus will be many. His grace is sufficient for you.

Hebrews 13:5-6 (amplified translation), has been my go to scripture for many years. He has always provided and made a way out of NOTHING, always!
He is a miraculous God, forever.

But for the people of God, “for God did not give you a spirit of fear, but of power, love and a sound mind”. None of this trepidation… although I sensed FUD today, and couldn’t quite place my finger on it… I prayed and sought the Lord Jesus and it went away.

And I agree that we the people of God the Father have not been given the spirit of fear unless of course we choose to remain there. This time of trepidation, shaking, events, catastrophes will cause great fear in the hearts of the lost, those that do not absolutely know that the Father is absolutely in control at all times. This will afford us great opportunity to share the gospel of the Lord Jesus Christ our hope!

I agree, the people of God have nothing to fear, but God wants us to know ahead of time what’s coming so when it comes we are not surprised or concerned. Jesus warned us about these times of trouble coming upon the world in the last days, which He called birth pangs leading up to even greater trouble during the tribulation and great tribulation. (Matthew 24)

I looked up trepidation and understand that it relates to people being fearful of what is to come. I’ve been waiting for the world to open their eyes and ears to what is happening around us. So many are so self absorbed and disinterested in real life. I’m beginning to feel the full effect of the spiritual world vs the flesh, mostly because of the blindness of my family and coworkers. They have no interest or desire to discuss anything even remotely linked to the events of the Revelation. If not for you all, the loneliness would be unbearable. I feel that I have a secret, but no one is interested in knowing it. The trepidation is a spiritual feeling at this time I guess. Wonder what has to happen to awaken the masses?

Hi Tess, I think once major things start to happen that it will wake up a lot of people and then they will be interested. Many people have been hearing about these things for decades, and that ‘Jesus is coming soon – maybe today’. After a while it just sounds like the boy who cries wolf and they quit paying attention.
Now is the time to be praying for our loved ones and the nation that God will grant them a spirit of repentance when the shtf and that they will cry out to God for salvation. When the birth pangs start many people will start to listen. We can pray now and sow seeds but we also need to sharpen our sickles so we can bring in the harvest. May God empower you with His grace!

Tess, the Spirit has also revealed to me about that loneliness I feel and what He showed me is, one of the things, is that Father has placed His ‘Hidden Ones’ and has been storing up His repository of (miraculous transformational healing power of the anointing oil in these flasks of oil, of which you are one – one of the wise virgins who are filling up flasks with oil – “from the understanding Spirit revealed to me about the parable of ten virgins”). All of these days of loneliness have been and are for the purpose of us coming away unto Him, coming aside to hear, taking time to allow His thoughts and His mind to be ‘downloaded’ into us so that , at the proper time He will bring us forth to show forth His glory and His praise in the earth, and then we will shine with the light of His glory upon us. This time of preparation is necessary in order for us to ‘not get entangled (again) with the yoke of bondage which the world tries to ensnare us with!!!
And, this morning , I was reading James 1:3 from the ISR version which is different from the understanding in the KJV. To wit, …that the testing of your faith, through endurance may have its perfect work. ( KJV says …through patience – the original language is more in line with the ISR version that says, ‘endurance’) …and what He showed me was a runner doing the mile and the first 3 laps , you try to stay in position for that final lap and you hit that final lap with a bit of a kick, and then for the final 220, with your lungs burning and your legs feeling like lead, and you think you can’t go any faster and you’ve got to outrun those 2 last runners blocking you from victory and somewhere deep inside of you , you feel that ‘something’ telling you ignore the pain, push past that barrier of no air, no strength and when everything inside of you is screaming ‘I cannot do it, I cannot go any faster’, then His Spirit kicks in, then He takes over and you feel that ‘second wind’, that’s the wind of His Spirit, the breath from Him, saying I’ve got this, Let go and watch Me win this race. We, you and Me, WE WILL WIN! And you watch your self catching up to and passing each of those last two runners blocking your way and you cross the finish line ahead of all!!!
Hebrews 12:1-3. (Passion translation)
12 As for us, we have all of these great witnesses. who encircle us like clouds. So we must let go of every wound that has pierced us and the sin we so easily fall into. Then we will be able to run life’s marathon race with passion and determination, for the path has been already marked out before us. 2 We look away from the natural realm and we fasten our gaze onto Jesus who birthed faith within us and who leads us forward into faith’s perfection. His example is this: Because his heart was focused on the joy of knowing that you would be his, he endured the agony of the cross and conquered its humiliation, and now sits exalted at the right hand of the throne of God!
3 So consider carefully how Jesus faced such intense opposition from sinners who opposed their own souls, so that you won’t become worn down and cave in under life’s pressures.

Thank you Thomas for these words..I can testify how difficult it is at times to live in that loneliness state but at the same time how much its rejoicing cause it is allowing me to consecrate more of my time to the Lord to be made prepared & ready for what is coming. When reading your post, the word downloading has struck me…and how far its true cause its what ive been seing a flow of words being downloaded in front of my eyes in numerous occasions. I believe that its the Lord’s instructions and guidance for our end of time ministry and assignment on earth. They shall be pulled back from our memory database when time come for it. Stay tuned and close to Jesus in this hour. They enemy is roaring like never before trying to find who he can devour..lets escape from his traps and evil stumbling blocks. Love you all, brothers & sisters in Christ.

God bless you all and z3news team.

You speak my circumstances and heart as well!

Hi Tess,
The self-absorbed mentality of today (in and out of the church) has been exacerbated through social media. This has caused a societal shift from personal to impersonal (disinterested in real life) because of living life out loud with the goal of obsessively impressing each other. As a result, genuineness may feel like it is almost pasay. But, as Kirk said, when the birth pangs increase, people will be open to the gospel. I do believe there are many more, who for the moment may feel the sting of loneliness, but, it is temporary and for the building up of his presence and his word in us.