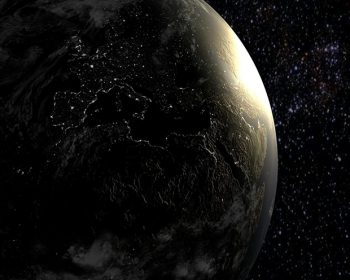 The dream started with me and my childhood friend Peter both outside a school. We were looking up at a terrifying phenomenon in the sky: it was daytime but the sky was pitch-black night! It was completely dark when the sun should’ve been shining in all its glory. At first no stars appeared and I saw no moon, the sky was completely black as though the stars had completely vanished or dissolved. It was confounding and awe-inspiring and virtually impossible to get our heads around. Then suddenly what looked like a handful of yellow stars appeared and began shooting in different, erratic directions like they were being shaken by a violent and chaotic wind. They only appeared briefly before seemingly being swallowed again by the night sky.

An awful noise like a cacophony of waring trumpets crashing into each other suddenly resounded all around us, seeming to reverberate from the farthest reaches of the globe. It was as though the sound had caused or was a divine partner to the cataclysm going on in the heavens. I spoke to my friend Peter in a calm but loaded voice; “There are few times in my life I’ve ever been scared, but I’m scared”. We were still outside a school when I noticed a perfectly straight red brick wall to our right and my friend Peter’s red hair. Then the dream ended.

I believe my dream shows the Day of the Lord is close at hand. The Bible says this will be a day of darkness (Joel 2v10) where the sun and moon grow dark and the stars dissolve and fall like withered leaves (Isaiah 34v4). This is why no stars were visible at the beginning of my dream, then I saw a few ‘yellow’ stars, like leaves which turn yellow before falling to the ground. I’ve had other dreams which show the yellow appearance could refer to other ‘powers of the heavens’ (Luke 21v26) being shaken, specifically Nephilim UFOs (Matt. 24v37 & Gen. 6v4) and man-made/re-engineered UFOs. They could’ve also spoken of asteroids, as I’ve seen yellow asteroids in a past dream.

The awful sound like a multitude of waring trumpets I believe is what Isaiah refers to in Isaiah 13v4 as the ‘tumultuous noise’ of the Lord gathering all the kingdoms of the earth together for battle as the ‘weapons of his indignation’ (v5). In the same passage Isaiah says this is the prelude to the eschatological Day of the Lord (v6). I was scared in the dream because this will be a fearful day unlike any other for the inhabitants of the world when this comes (v7).

Jeremiah also speaks of the ‘tumult’ of this day:

The tumult will resound to the ends of the earth,

for the Lord will bring charges against the nations;

he will bring judgment on all mankind

and put the wicked to the sword,’”

As Christians, the Bible says we’re not appointed to wrath, but to receive salvation by the Lord Jesus Christ. (1 Thess. 5v9). This means we shouldn’t fear, while also making sure we remain on the rock of Christ, even as Peter remained on that rock despite going through ‘rocky’ times where he nearly parted ways from Jesus by denying Him (Luke 22v61-62). God will be the shade at our right hand (Psalm 121v5), a wall which provides protection if we continue to follow Him just as Peter did. While devastation will come to the world (symbolised by the red on the wall), the Holy Spirit will come upon His people in might and power. I believe my friend Peter’s red hair symbolised this, just like the fire that came upon the disciples’ heads in the Upper Room. This is also the place where Peter gave his prophetic sermon about the signs in the heavens which would signal the approaching Day of the Lord (Acts 2v20).

The imagery of the wall however does give us a clear and vital warning: like Amos’ vision of a wall built straight to plumb, and Jesus with a plumb line in His hand (Amos 7v7-8), so judgment will come upon God’s people in the days ahead if they’re not abiding in Christ as they should (uprightly/erectly), sincerely in the holy grace of God. Judgment always begins at the household of God before it comes to the world (1 Peter 4v17-18), and the coming judgment will either be a fire which refines us or take us down in a similar way that Ananias and Saphira were judged (Acts 5). It may even trap us in a day no one wants to find themselves (Matt. 24v13), or worse still lead to eternal destruction if we depart from Him (Heb. 3v12), so we need to be faithful to endure in the days ahead. Jesus said that he who endures to the end will be saved (Matt. 24v13).

If this is the day of the Lord refered to in the dream which Matt 24;29 and Rev 6:12-14 refer to then that is when the 6th seal is opened and we are raptured to heaven Matt 24:31.We are not appointed to wrath .The day of the Lord starts the wrath of God Rev 6:17.There may be another 3 days of darkness refered to in Rev 16:10.I see that this is the 5th viol that is poured out upon the seat of the beast.So if this is the 3 days of darkness that doesn’t seem to happen until the trumpet and viols are poured out probably in the 2nd half of the final 7 years after we are raptured at the 6th seal.

Hi Michael. I agree that we’re not appointed to wrath. I believe this is a dream which warns us of the time we’re fast approaching, and our need to be abiding uprightly in Christ. If we don’t, then we may be ‘left behind’ to face this day of the Lord. I also believe it’s likely revealing some of the judgments that may lead up to this day–precursor events which may be shadow events to the actual day of the Lord. Acts 2 shows us that war and signs in the heavens will be lead-up events to the day of the Lord (Acts 2:20). Keep in mind that not all wrath is reserved for the actual day of the Lord, because in a general more limited way, the wrath of God is being poured out on the earth all the time (Romans 1v8 – notice how it says the wrath of God ‘IS’ being revealed from heaven, present tense), and Romans says that one way God is doing this in the present is to give people over to a debase mind and to their evil lifestyle (Romans 1v24-28) because they refuse to accept the truth.

yes I agree Tim..We need to be ready and have a right relationship with the Lord.I believe covid-19 is both a skaking to bring people to repentance and also a judgement because the blood of billions of aborted babies cry out from the ground.I believe there will be more shakings and birth pains leading up to the day of the Lord.

I keep seeing a reference to the Tribulation being 7 years, but find no reference to it in the Bible. How/where is this number of years coming from? Please and thank you.

Jesus said in John 16:33 that we will have tribulation in this world. So there’s no time limit on that. But the tribulation that occurs under the beast of Revelation is limited to 42 months, because Revelation 13:5 says that is the length of time the beast is given authority to act.

However (I believe), before the beast comes to power, the two witnesses of the Lord will be on the scene for 42 months or 1,260 days (Rev. 11:3). It is only after they have finished their testimony that the beast that comes up from the abyss will attack, overpower, and kill them (Rev. 11:7). This is the time (I believe) that the beast is given authority to act for 42 months. That is why it is able to attack, overpower, and kill the witnesses. Prior to the beast, anyone who tried to harm the witnesses would be killed by the fire that came from their mouths (Rev. 11:5).

Does anyone know if the 3 days of darkness is biblical or not?

If you are asking if there is a mention of three days of darkness in the scriptures, then the answer is yes, and the clearest scriptural reference is Exodus 10:22.

Can it happen again? I have found an answer in Psalm 115:3, “Our God is in heaven and does whatever He pleases.” So it is not beyond the realm of possibility.

But if you are asking if the multitude of words and prophecies about the three days of darkness that one may have come across online are biblical, then I must hold my peace, for I have no revelation from the Lord in this regard.

https://youtu.be/Up8-nVfFXEY…Efrain Rodriquez, a prophet, was shown an asteroid hitting off coast of Puerto Rico resulting in 3 days darkness(impact @ 2am)-earth’s rotation stopped for 3 days..there are more references on you tube…been awhile since I first heard this-before the hurricanes hit PR..the result of this impact according to him, teutonic plates on east and west coast-California earthquakes…PR submerged…this asteroid breaks during entry pieces falling in Atlantic ocean..east coast devastated..North Carolina flooded up to Appalachain mts

Jonah was in the belly of the whale 3 days