You are here: Home » Church » Day of Atonement Postponed by Two Days Due to Sand Storm
Share this post: 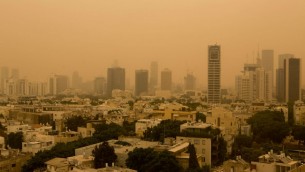 According to a website that tracks new moon sightings from Israel for the purpose of keeping up with Jewish holidays, the day of atonement has been postponed until Friday September 25th.

In ancient Israel, the calendar and holy days were determined by new moon sightings. Although this practice is no longer used in modern Israel, many Jewish people still rely on it to determine the timing of their holy days. Even though the official date for the day of atonement has not changed and is still scheduled to start at sunset on September 22, those who rely on moon sightings have postponed it by two days.

The day of atonement always follows ten days after the Jewish new year. The Jewish new year was supposed to begin at sunset on September 12, but the new moon was not visible from Israel at that time due to a bizarre sand storm, the worst in their history. The sand storm lasted for six days, from September 8-13, and broke all records for air pollution and electricity usage in Israel. 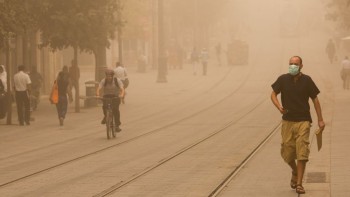 The rules for changing the dates for Jewish holy days gets complicated, but more details are available here.

How is it possible for the Fall Feasts of the Lord to fall in the Summer? Is God confused, or a prefabricated man-made modern Hebrew calendar in error?? Ancient path-way of determining the beginning of the Fall Feasts or Appointments is to watch for the 1st Crescent of the New Moon – AFTER the Fall Equinox. Perhaps the Creator expressed His disapproval of changing the Appointment times (Daniel 7) via manifestation of the historic epic sandstorm – or used it to point forward to the blasphemy presented by “His Holiness” the pope with the Obamanator in tag-team fashion after arrival in DC @ NWO UN in NYC?? What if Tishrei 1 – TRUMPETS is OCTOBER 14-15, 2015 – and Yom Kippur Atonement is yet to come…? Keep Watching!!

I declare Liberty – entering the 70th JUBILEE of All jubilees!! Many Blessings and Shalom. ♡ – Leo

Leo, never in the history of the sacred calendar has a Tishri 1 fallen past october 5th. Also, God does not reset his calendar by anything solar, but every year it’s automatically reset by the barely harvest, so he never has to add days or make such adjustments.
I had similar questions earlier in the year, but I found a website (fforgot where it was) that showed me pictures of this year’s barely harvest and it showed the barely ripened in several locations across Israel, so the calendar would not change.
This is how God sets and resets his calendar from scripture. It does not change from anything solar. Hope that helps.

I was unable to find the sandstorm report on the website you linked to in the first sentence of you article. Please provide the exact URL. Thanks.

This is the day the Lord has made. I will rejoice and be glad in it. I will also continue to look up and watch, because my redemption draws nigh. Maranatha.

This is actually not true. The reason for the “postponement”, that is.
I have been a keeper of His Appointmented times according.to the sighting of the moon/Rosh Kodesh for almost 20 years. There was NO way the moon would have been sighted in ISRAEL on the 12th, sand storm or not. (Many people were looking, as is our custom). It was a completely dark moon. On Monday night, the sky’s were clear enough in many places and again, many many experienced views looked, but the lag time of illumination was so tiny that it still was not yet revealed/able to be seen in Israel…. It was not yet in the rotation far enough to have even the tiniest sliver visible. There was NO issue with the sand storm on Monday night, the sky’s were clear enough from the past dust storms.as.well as from any cloud cover that viewing it would have been possible had it been there. It was not declared then simply because it was not the first day of the month is all.
By Tuesday Rosh Kodesh was seen. This is why it was declared then. The Rabinic calendar (Hillells) is almost always off a day or two from the actual sighting. Its almost.2000 year old mathematical formula used to determine when it might be, which is why many if us now no longer go by it but have reverted back to the original, sighting it.

While it may line up better now for you and predicted dates, it has nothing to do with historical sand storms. Let us not make things my hyped up than they are in this atmosphere and let us look only to Him and His signs and be amazed in that alone!

Thanks for clarifying the reason for the delay. The report of the sand storm was not an attempt to hype anything, but was what was being reported by other sources, including the site which is solely dedicated to moon watching in Israel. Your information is also helpful in confirming the delay.

God bless you so much James!
My heart was so moved to read this I almost started crying!
Perhaps it is so that this is an act of love from our almighty Father, who’s loving compassion for us is so strong!
He does not want anyone to perish but wants all to receive him while there is yet time.
Thank you God!!!

This goes with godshealer7 on youtube who just posted earlier today that the Lord was giving us a little more time! Wow!
https://www.youtube.com/watch?v=fZmNwsZMGXU

Numerous times, the Lord has proven to me many signs numerically thru dates. Thru out the bible, God also speaks thru numbers. Well, very often , God has had me catch signs thru dates and I would always add the month day and year, like this. 9-3-10=22. Well, the 25th is 9-25-15=49 or 7×7, the number of completion or fulness, where we get the word several or to sever. Seven is the number of completion and I do believe the 25th will be quite a fullness.

Wow! What a great insight. I love stuff like that. Just another confirmation about what the Lord is doing. Thanks for sharing!

…and a day is as a thousand years to the Lord. 2 days? You all seem so hungry & greedy for God’s judgement to fall. Best be cross-examining your own hearts first.

Sounds like we’re too late for that because you have already judged us and found us guilty. Should we stop sharing what God is giving us?

This brought to mind the Scriptures regarding “changing the days”. . . .I find it “interesting” the verse numbers coincide with this change of dates for Yom Kipur this year, since this will change it from sundown, Sept 22-23 and now it is sundown Sept 24-25 (check out these specific verses. . .quite amazing): here it is: Daniel 7:24-26 – …24’As for the ten horns, out of this kingdom ten kings will arise; and another will arise after them, and he will be different from the previous ones and will subdue three kings. 25’He will speak out against the Most High and wear down the saints of the Highest One, and he will intend to make alterations in times and in law; and they will be given into his hand for a time, times, and half a time. 26But the court will sit for judgment, and his dominion will be taken away, annihilated and destroyed forever.…

Did you know there is NO word in Hebrew for “coincidence”?

It is on my list to further research Holy Days. I came across a site that had NT references that showed even Jesus honored the Holy Days. My theory lately has been if I’m not sure, I’m going to do it anyways. Recently pork & shellfish have left my diet. If/when I marry I will cover my hair when praying. Not Biblical, but I do not eat animal or animal products that are not treated humanely. How many here celebrate/honor Holy Days?

People love to cry legalism at any mention of such things, but as long as our heart is to honor the Lord I believe he is pleased when we celebrate his holy days.

Amen James. More and more believers are finally recognizing the prophetic significance of the Feasts and prophecy throughout Torah.

10 I make known the end from the beginning,
from ancient times, what is still to come.
I say, ‘My purpose will stand,
and I will do all that I please.’