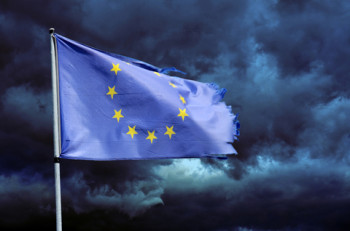 European leaders are claiming Europe’s problems have all been solved. The mainstream media repeats their talking points, telling investors and viewers what they want to hear. Maybe they think repeating it often enough will make it come true. Unfortunately, the numbers show Europe’s problems are far from solved. In fact, things are getting much worse. On top of that, four dark clouds are looming just ahead.

The 2008 collapse of the U.S. housing market dealt a big blow to European economies, especially the ones carrying large sovereign debt, including Greece, Portugal, and Italy. By 2010 bailouts were needed in several countries to avoid defaults.

Despite all the claims that these problems have now been solved, the numbers show a very different story. Not only have the sovereign debt levels not been lowered, they have increased significantly in almost every EU country. The chart shown below shows the debt to GDP ratios have grown sharply since 2009, which is the last year before the bailouts started.

The numbers are ugly no matter how you look at them. The debt levels have steadily increased every year in almost every country. Comparing 2012 with any previous year tells the same story. Unfortunately, it is not the story we are being told. 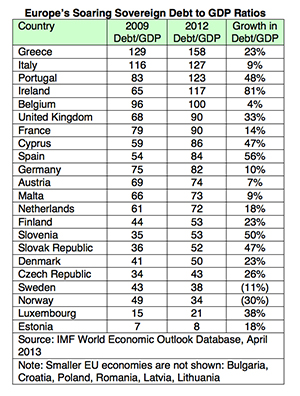 Despite countless meetings of EU leaders, and despite their promises, assurances, and even celebrations, the European crisis is still very much alive and well. In fact, today’s higher debt levels make the EU far more vulnerable than ever before. Problems that would normally be manageable now pose a serious threat. These include higher interest rates, war, natural disasters, and economic troubles in other parts of the world. Any kind of disruption could cause the EU to collapse.

EU leaders have failed to fix the fundamental problem of excessive government spending. They have played the shell game, transferring debt from one country to the next, but in the end everyone’s debt level has increased. So far, the best thing they have come up with is some tough talk from Mario Draghi, President of the European Central Bank. His comments temporarily reassured nervous investors, but did nothing to fix the underlying problems.

Before Europe can eliminate their rapidly growing debt, they must first eliminate their widespread confusion about how to fix it. Government leaders caused the problems, but now appear completely incapable of finding solutions. Many government leaders and news media analysts believe the solution to the problem, which was caused by excessive government spending, is more government spending! In fact, many blame the whole problem on the austerity measures. Common sense appears to have fled the continent a long time ago.

The only way their debt levels are ever coming down is by cutting government spending. The austerity measures enacted so far have been tiny compared to what was needed. Nobody wants to give up their government benefits, but unless lots of people do Europe is headed for an economic collapse that will be far more painful than any austerity measures would have been.

In theory the problem is fixable, but politically it might be impossible. Excessive government spending has produced a generation of Europeans who are addicted to government handouts, six to eight weeks of paid vacations every year (even for new employees), guaranteed healthcare, etc. They have shown no willingness to compromise. Even relatively small cuts in spending have already resulted in labor strikes and violent riots in Greece and Spain.

As former British Prime Minister Margaret Thatcher once said, “The problem with socialism is you eventually run out of other people’s money.” Hopefully Europe will learn to reject socialism and unleash the private sector, which has always proven to be a far more effective and efficient manager of resources than any government.

After numerous failures in country after country, Europe’s future now lies in the hands of their stongest economy, Germany. Professional violinist and prophetic minister Maurice Sklar saw this day coming when he received the following word from the Lord in December 2011.

“There is an even greater financial disaster that is falling upon Europe that will collapse the Euro, cause panic and chaos there. Germany will refuse to prop up the euro any more. Basic needs in the poorer European nations will be threatened. Many will lose their money overnight as the stage is set for the financial takeover of the Antichrist system. This is imminent, and the dollar will also follow, although it will survive for a season more.”

Maurice Sklar’s insights show the future of the Euro and the European Union depends on Germany’s willingness to continue propping it up. It sounds like World War 2 all over again. The foreign fronts have all collapsed and the motherland is now under attack. Once again Germany faces an enormous challenge. To make matters worse, four dark clouds are now coming into view.

With the upcoming election in Germany only a few days away, Chancellor Angela Merkle is in a close race with Social Democrat challenger Peer Steinbruck. The election will be held on September 22, but Germany’s political system is so complicated that it could take weeks before the final results are known. After the 2005 elections, it took Germany eight weeks to form a coalition government.

The bailout issue has become big enough to swing the election against Angela Merkle, which is why her campaign strategy has been to avoid the issue altogether. So far her strategy appears to be working. With the election less than a week away, she has a significant lead. The latest polls show 38% support Angela Merkle’s Christian Democrat party while only 27% support the Social Democrat Party and 11% support the Green Party (Source: Wikipedia). However, due to Germany’s complex election process the outcome is still unclear. There is still a chance the Christian Democrat party could be forced to form a coalition government.

Just one week after the upcoming election, the International Monetary Fund (IMF) is scheduled to release the results of their Greek program review on September 29, although that date might get pushed back due to the elections. Their report is expected to show another Greek bailout will be needed in 2014. The IMF has already released projections that Greece will run out of money again by August 2014. That creates problems for Greece because IMF rules forbid lending to countries with projected insolvency within the next twelve months.

The IMF report could also stir up greater opposition from the German people. After two previous failed Greek bailouts, an unfavorable IMF report is expected to make a third bailout even more unpopular and far less likely. To make matters worse, Greece has repeatedly under-delivered on promises to make major spending cuts. Even the smaller cuts they have made caused labor strikes and violent riots. Unfortunately for Greece, bigger spending cuts are needed to eliminate the deficit. Unfortunately for the rest of Europe, they might be seeing their own future in Greece.

Even if Merkle wins re-election and the IMF gives Greece a glowing report, there is still another dark cloud looming. The German constitutional court, based in Karlsruhe, is currently deliberating on the legality of the European Stability Mechanism (ESM) and the ECB’s Outright Monetary Transaction program (OMT). The court had preliminarily approved the ESM in September 2012, but a hearing in June 2013 raised questions about the scope and boundaries of the ECB’s monetary policy mandate and the OMT program and its consequences on the ability of the Bundestag (the German parliament) to manage its own budget. The court is expected to announce its decision on these matters in the next few weeks.

Ultimately the court could force the German government to bring the ECB to the European Court of Justice or, even more dramatically, request Germany to leave the eurozone as a former constitutional court judge recently argued. Either of those actions would cause great instability in the European Union and could even cause it to collapse.

I believe a worldwide banking and credit crisis is going to emerge before the end of 2013 causing an economic collapse that will be three times worse than the 2008 collapse of the housing market. Based on prophetic words that I have heard, I believe it will catch world markets by surprise. To them it will appear to hit almost overnight because they have chosen to ignore all warnings. “While they are saying, ‘Peace and safety!’ then destruction will come upon them suddenly like labor pains upon a woman with child, and they will not escape” (1 Thessalonians 5:3).

The large debt levels of European nations makes them very vulnerable to the coming crisis. If interest rates rise sharply, many European governments would be unable to pay their debts.

Contrary to the popular narrative, Europe’s problems are far from over. World markets are continuing to trust what they are hearing from EU leaders and the mainstream media, but the numbers tell a much different story. With four dark clouds looming just ahead, the crisis that never really ended could soon be re-ignited. With sovereign debt levels rising rapidly in almost every country, Europe is on an unsustainable course.

I believe Germany will determine when the shell game is over. Any one of the four dark clouds listed here could be enough to convince the German people to stop the bailouts. When that happens, the collapse of the EU and the euro will soon follow. I believe the final chapter of the EU crisis will come no later than 2015.

Today is the 29th, Italy’s government fell yesterday as it seems, we are looking to go back to elections. Our sales tax just went from 21% to 22% and they plan on returning housing tax. MPS a very large and old bank is now hinting that they will not pay interests on a hybrid bond (I think that was the term–I am not well versed on all these bank things) so to help themselves with their own personal bail out. We are in deep. Yet everyone I speak to knows nothing of this and are not informed nor want to be informed—apart from the fact that so much is found out through foreign news services and not Italian ones—mustn’t wake the people up. How sad.

I came to your blog through a link from Prophecy Update. Excellent article James. It certainly appears that the world economy and the wars and rumors of wars in the Middle East with Israel are building to a crescendo that will be capped by the return of the Lord Jesus for his bride. God’s Word is simply amazing! “Soon and very soon we are going to see the Lord” Maranatha!