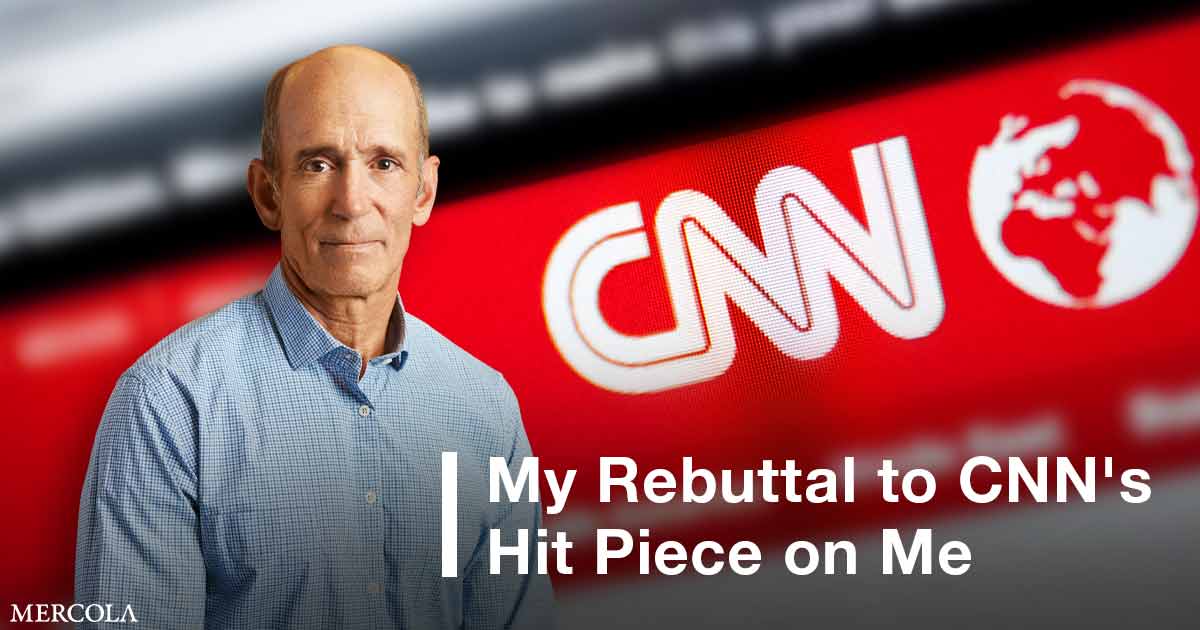 According to the powers that be — including the current administration,1 which is taking its talking points from an obscure group funded by dark money, operated by an unregistered foreign agent2 — I am the No. 1 superspreader of COVID-19 misinformation.

This, despite my reach being significantly smaller than mainstream news outlets like ABC World News Tonight and Fox News anchor Tucker Carlson, both of which were on the list of the Top 15 Facebook posts in the U.S. questioning the safety of COVID shots from mid-June to mid-July 2021.3

The fact is that most of the people targeted as the Top 12 disinformation spreaders by our sitting president have very limited reach. My guess is a majority of people have never heard of some of them.

Yet, just 12 people are accused of spreading two-thirds of all “vaccine misinformation” without penalty, and the president of the United States is now demanding we be denied our right to free speech and eliminated from the worldwide web.4

August 4, 2021, CNN followed in The New York Times’ footsteps, airing another hit piece on me. Not surprisingly, CNN relied on the “expertise” of Imran Ahmed, founding CEO of the Center for Countering Digital Hate (CCDH), a member of the Steering Committee on Countering Extremism Pilot Task Force under the British government’s Commission for Countering Extremism.

Ahmed, an unregistered foreign agent, crafted “The Disinformation Dozen” report5 now used by media and government officials in the U.S. to target and harass citizens and strip them of their Constitutional rights.

As noted by Missouri Sen. Josh Hawley,6 before the CCDH started attacking individuals for speaking out about COVID jab dangers, Ahmed tried to get a number of conservative websites and news organizations banned and deplatformed.

“Who is funding this overseas dark money group — Big Tech? Billionaire activists? Foreign governments? We have no idea,” Hawley said in a July 20, 2021, tweet,7 adding “Americans deserve to know what foreign interests are attempting to influence American democracy.”

According to Capital Research, through his funding of a Washington D.C. consultant firm called Arabella Advisors, which allows his identity to be obscured, Wyss has been secretly influencing American policy.11,12 Reporter Hayden Lidwig has also described the inner workings of Arabella Advisors and the influence of the “dark money” flowing through it, noting that Arabella runs:13

“… vast array of ‘pop-up groups’ … called so because they consist almost solely of slick websites that may pop into existence one day and pop out the next, usually once the campaign is through. We’ve counted over 350 such front groups …”

Lidwig points out that “Arabella is as dark as ‘dark money’ gets,” and that “When a special interest donor goes to Arabella, they’re expecting a political payoff.” The description of Arabella’s pop-up groups makes me think of not only the CCDH but also AntivaxWatch.org,14 which co-sponsored the CCDH “Disinformation Dozen” report.

AntivaxWatch.org is even more opaque than the CCDH. It has no public face and no founding or funding information of any kind. It’s just an anonymously created organization that claims to be “an alliance of concerned individuals who are seeking to educate the American public about the dangers of the anti-vax industry” that links to articles and reports by the CCDH and other extremist vaccine pushers.

The CCDH also has ties to British intelligence, which is using sophisticated cyberwarfare tools against the public in order to shut down free speech.15,16,17 Ahmed has gone so far as to label this website a “national security risk,” because “once someone has been exposed to one type of conspiracy it’s easy to lead them down a path where they embrace more radical world views that can lead to violent extremism.”18

With that in mind, doesn’t the fact that government is actively seeking to shut down conversations about vaccines — using warfare tactics no less — suggest that the vaccination campaign has a purpose other than keeping the public healthy and safe?

How is it reasonable to insist people take an experimental drug without asking questions, or be targeted as an enemy of the state? Isn’t that like telling a cancer patient, “We demand the right to dictate how you live or die, so take this experimental chemo, or else we’ll stick you in solitary and starve you to death”?

CNN Reporter Harasses Me Outside My Home

Rather than send me an inquiry, an unmasked CNN reporter, Randi Kaye, opted to track me down as I bicycled around my home town to ask me about why I say masks don’t work. Neither was she wearing a mask when she visited my business in Cape Coral and quizzed employees standing less than a couple feet away from her.

“Are you spreading misinformation?” she asked. I replied with a simple “no.” Because I’m not. Raising questions about the usefulness of masks and the potential adverse impacts of experimental COVID shots is not misinformation. It’s just information — information needed to make a fully informed decision.

Informed decisions cannot be made if all you have is one side of the argument, which is all you get from mainstream media. At the end of her segment, Kaye herself refers to my posts as “information,” before quickly correcting herself, saying she meant “misinformation.”

All Talk, No Evidence — That Is Propaganda

“What Mercola hasn’t made clear to his followers is that according to the CDC, the vaccines are safe and effective,” Kaye says, providing no scientific evidence to substantiate the CDC’s arbitrary claim.

(That CNN trusts the CDC is clear, however, seeing how they recently fired three employees for coming to work unvaccinated.19 CNN chief Jeff Zucker has stated the company has a “zero tolerance” policy when it comes to COVID injections. All staff that come into contact with other employees or are out in the field must get the injection.)

Kaye, of course, thinks not responding to intentionally accusatory questions means I’m guilty of what she’s accusing me of. I disagree. “Why won’t you speak to us?” Kaye yells as I pedal away.

Why? Because it’s pointless speaking to someone who is so antagonistic she can’t even formulate a neutral question. CNN has abandoned journalistic ethics and Kaye’s questions made it clear she was working on a hit piece.

After that encounter, Kaye emailed me her questions, which I responded to. My answer to whether COVID shots have the ability to alter a person’s genetic coding was not included in the show.

What Happened to the First Amendment?

At the end of her report, Kaye includes a portion of my August 4, 2021, announcement that I will be removing all archived articles from my website, and that new articles will only be viewable for 48 hours before being removed.

Even that is not sufficient, according to Kaye and Anderson Cooper. The main concern, she says, is whether any of my articles might make it onto social media platforms, if even temporarily. Kaye reached out to social media companies to find out how they intend to violate my First Amendment right.

Twitter responded they are removing tweets and applying misinformation labels to some of my posts. Facebook told her they have removed some of my pages and banned others. YouTube replied they’ve removed some videos but that I have not yet accumulated enough strikes to be fully de-platformed.

She also lamented that my latest book, “The Truth About COVID-19” — which she said she wasn’t going to name — is on Amazon’s Best Seller list, at No. 1, no less, giving people access to my information despite my removal of articles.

Over the past year and a half, you’ve been repeatedly told to “listen to the experts,” and when it comes to virology and vaccinology, the foremost “expert,” despite not having a medical degree of any kind, has been Microsoft mogul Bill Gates.

August 4, 2021, CNN’s Anderson Cooper interviewed Gates about the current state of the pandemic response and the threat posed by the Delta variant.20 Is there really no licensed physician in the United States willing to speak to Cooper on this issue? Or do they all have the wrong opinion?

The tragedy Gates wishes everyone would focus on right now is the number of COVID-19 deaths occurring in unvaccinated people. No mention was made of the number of previously healthy people suddenly dying after receiving an experimental COVID shot.

Cooper and Gates also did not explain why they think dying from a naturally acquired infection is more tragic than dying from medical experimentation, entered into without full acknowledgment of the risks.

According to Gates, the parameters that will determine how deadly this fall and winter will be, will be the adherence to mask wearing and vaccination rates. Cooper cites a Kaiser Family Foundation poll showing “more than half of unvaccinated Americans still believe the vaccine is more dangerous than the coronavirus.”

When asked what he believes might work to dispel this wrongthink, Gates responded saying it’s important to listen to the opinions of the unvaccinated to figure out whom they do trust. This way, those who have their trust can be targeted to lead the flock to the vaccination center.

Aside from that, Gates believes simply reading the numbers of how many unvaccinated die from COVID-19 is an effective way to convince people to get the jab.

Ultimately, Gates is hoping for an 80% to 90% vaccination rate in the U.S. He also warned “you can’t assume” a worse variant won’t emerge in time, as the virus continues to mutate, and that one or more boosters will be inevitable.

Meanwhile, the World Health Organization is now seeking a moratorium on booster shots in the developed world until the end of September 2021, to ensure undeveloped countries can get at least 10% of their population injected.21 In an August 4, 2021, media briefing, WHO director-general Tedros Adhanom Ghebreyesus stated:22

“I understand the concern of all governments to protect their people from the Delta variant. But we cannot — and we should not — accept countries that have already used most of the global supply of vaccines using even more of it, while the world’s most vulnerable people remain unprotected.”

From a continuity of narrative perspective, they’re in quite a pickle. On the one hand, we’re told that no one is safe until 100% of a given population is injected, but then again, if we can just get some countries to the 10% mark, that too would be sufficient for the time being. Just how a 10% vaccination rate in some countries would suffice while 60% to 70% in others is still considered too low remains unexplained.