You are here: Home » Prophecies » Many Christians Will be Brought Before Tribunals 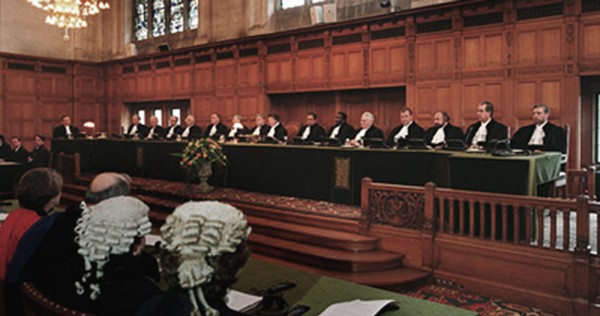 In a dream I immediately saw myself in a court room, seated on the witness stand. In front of me was a long table with a panel of older, distinguished looking men all seated on one side of the table facing me.

Also in front of me a man was interrogating me. He began by asking me, “So then are you a Christian?”

He had a wicked smirk on his face as he asked me another question. “So then you believe that Jesus Christ is God?”

After each question, he would then turn around and look back at the men seated at the long table. I looked at them and they were all glaring at me.

I knew if I said “yes”, it was going to go very bad for me. I also knew if I answered “no”, I would be denying Jesus Christ to save myself, and I would be allowed to go free. Instantly within myself I said, “No! No! I will not and cannot deny Jesus Christ.”

So I answered, “Yes I believe Jesus Christ is God.”

Just then I saw the face of the man interrogating me became darkened with an evil hard to describe. His eyes were black! With an evil smile he turned and looked back at the men in a way to signal to them like, “You see!”

Then his questions became more defined. “So you are a Christian. Do you hear from God? Does he speak to you?”

Each time I answered the other men wrote things down.

He began pressing upon me with greater vehemence. His voice began to fade and be overtaken by another voice. I heard the voice of the Lord say to me, “In the last days, many Christians will be hauled into tribunals just like this. Whoever denies me will be set free, but their freedom will cost them their lives and eventually their eternal lives. Their freedom will be a limited freedom that will torment them. Those that do confess Me will considered insane and will be committed to mental asylums.”

The Lord’s voice faded and the wicked questioning pressed on. I knew it was over for me, but I made up my mind knowing where I was going I would not be alone.

1 John 4:4 – “He who is in you is greater than he who is in the world.”
Yesterday I felt an overwhelming presence of the Holy Spirit. I heard a strong voice deep in my spirit telling me not worry that other people don’t understand me when I talk about serious things of prophetic events and calling. Hard to explain but the voice resonated in me and felt as if it was played inside me on a large speaker like one used on a public address system. Never had this sensation before. I was walking around by myself inside a Menards. It is a lonely feeling when no one truly understands you. People think I am too serious and “not fun.” So the Holy Spirit explained other people don’t understand me for the same reason people don’t want to know deep things of the Spirit. Most people, I think, are living in their own version of reality. One in which they have a perfect fairy-tale ideal they are living in. One developed over the years and not even the Holy Spirit is going to impede this. So they QUENCH THE SPIRIT. This includes Christian people in my life.
When I was 12 in Catholic Catechism class I asked the Bishop who the Holy Spirit was. His reaction was shock that I asked such a question and answered: Read the Catechism book. Why would I, a shy introverted kid blurt out such a thing?!?! I still cant figure it out.

Joan,
Can you please email me? I am a Jewish American farmer living in a moshav in Israel. I would like to talk with you. Thank you for being an obedient servant to YAH.

Shalom Deb, I have emailed you and look forward to talking with you. In the mean time be blessed in Yeshua!

Here is a 10 minute WARNING MESSAGE from Dr. Patricia Green posted on 12/5/2015. It is called
“The Beginning of Sorrows.” She was told we are currently living in Matthew 24:7, and also given a sign to watch for that will signal the beginning of persecution for Christians:
https://www.youtube.com/watch?v=FYrBhYWF3Gk

I know the Bible tells us to “…always be ready to have an apology for the faith”. I believe that will include the time(s) we are called up before the NWO governing authorities very soon! It is already a double standard where secular beliefs and “alternate lifestyles” can be openly talked about at work, but I cannot even speak of my belief in Yahsua! Stay strong in Him, fellow warriors! The battle grows ever more fierce against the evil one.

Joanie I just heard you on the Trunews broadcast and was very blessed. Thank you for the Word from the Lord to the listeners and keep up the excellent work.

Sounding The Alarm!
Demon Possessed Magicians Deceiving The Masses
There is a growing trend of demonically possessed magicians that are using outright demon powers of darkness to confuse and deceive society. These magicians are able to manipulate and defy the laws of physics, the laws of thermal dynamics, and the laws of nature at will.
They are demonstrating their capabilities out in the open and creating awe and wonder in the sight of many people and witnesses. These are not normal magicians who use slight of hand tricks to entertain people. These are fully demonized and extremely powerful agents of Satan at work.
The goal of Satan in using these willing vessels of evil is of course to deceive and steer people toward the occult and realms of magic, by introducing them to the supernatural realms of the spirit world without the elements of Jesus, Christianity, and Godliness.
YouTube Links
Magicians Exposed using Demonic Spirits FULL – YouTube
https://www.youtube.com/watch?v=J0QDc7baQfk
Here is a link with an example of what I am sounding the alarm about.
Satanic Illuminati New Age Witch Craft Magicians Exposed!! 2014
https://www.youtube.com/watch?v=GPOCuWaRmjE&list=PLCXm3FE09MqwGztHpqGAejiDKjIULtuht
Here is another link with a play list showing many examples of the ongoing phenomenon.
We must inform the remnant of the Lord about what is taking place. What is at stake is losing our children and grand-children to the complete control and manipulation of their beliefs into a world of demonic activity and deception.
Please pass on this information and keep praying for the Remnant of the Lord!

The judgments on the world is that the extinguishes its own Light. The world killed Christ to extinguish the light given to it. At the end of this age, the world will again kill the body of Christ in a great persecution of believers and eliminate the Holy Spirit, their only hope of repentance and salvation. So we have a rejection of the Father (end of judges for example), the destruction of the Son, and third, the removal of the Spirit.

Yes I’m in GA. I’m not accustomed yet to so many dreams and visions. I need to learn more discernment and more waiting on the Lord. I want to be working on that. If there’s something God wants me to share I definitely will. I want to do His will. I do love this site. You are all so helpful. Blessings!

Get accustomed dear sister. You have stated you want to do his will. That is the main thing, much more will be added. Read the word. Read a chapter at a time and consistently, and pray the Lord to bring you understanding of the concepts, how it fits together, and ask,seek, knock. And it will be opened to you. When you have the word in you, the Holy Spirit can bring them to your remembrance, so store up.

Donna,
Where are you located that all these weather events are happening, in the south?
Also, why won’t we hear from you? Is it because you’ve found your own answers and prefer to walk one-on-one with the Lord? God Bless.

Luke 1:41 kept coming to mind when I heard you on TruNews. My spirit was dancing. And things were put into perspective for me as to the dreams and visions I’m having – my relationship with the Lord is one-on-one closer than ever. He walks with me and I’m truly grateful. I’m not a prophet and don’t ever say I am, but I know he’ll lead me in these last days. In fact, I’m still trying to figure out some of the things that have happened so I know now that a lot of it is between me and the Lord. We’ve had so much rain and our roofs are leaking, basements are flooding, porches are caving in, roads are caving in, and its the best day I’ve had in a long time. Things are in perspective. I know what’s most important and its nothing material. Lightning just hit something near the house so I better go. I will still enjoy this site but doubt they’ll hear as much from me now. Some I’m sure are thankful. God bless you and your work! All of you!