You are here: Home » News » Jesuit Schemes by Nation » Chile » Chile, September 11, 1973: The Ingredients of a Military Coup 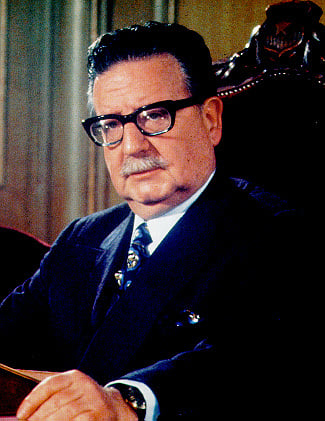 Almost half a century ago on September 11, 1973, the Chilean military led by General Augusto Pinochet, crushed the democratically elected Unidad Popular government of Salvador Allende.

The objective was to replace a progressive, democratically elected government by a brutal military dictatorship.

The military coup was supported by the CIA. Secretary of State Henry Kissinger played a direct role in the military plot.1

In the weeks leading up the coup, US Ambassador Nathaniel Davis and members of the CIA held meetings with Chile’s top military brass together with the leaders of the National Party and the ultra-right nationalist front Patria y Libertad.  While the undercover role of the Nixon administration is amply documented,  what is rarely mentioned in media reports is the fact that the military coup was also supported by a sector of the Christian Democratic Party.

Patricio Aylwin, who was elected Chile’s president in 1989,  became head of the DC party in the months leading up to the September 1973 military coup (March through September 1973). Aylwin was largely instrumental in the break down of the “Dialogue” between the Unidad Popular government and the Christian Democrats. His predecessor Renan Fuentealba, who represented the moderate wing of the Christian Democratic Party (PDC), was firmly against military intervention. Fuentealba favored a dialogue with Allende (la salida democratica). He was displaced from the leadership of the Party in May 1973 in favor of Patricio Aylwin.

The DC Party was split down the middle, between those who favored “the salida democratica”, and the dominant Aylwin-Frei faction, which favored “a military solution”. 2

On 23 August, the Chilean Camera de Diputados drafted a motion,  to the effect that the Allende government “sought to impose a totalitarian regime”. Patricio Aylwin was a member of the drafting team of this motion. Patricio Aylwin believed that a temporary military dictatorship was “the lesser of two evils.”3

This motion was adopted almost unanimously by the opposition parties, including the DC, the Partido Nacional and the PIR ( Radical Left).

The leadership of the Christian Democratic Party including former Chilean president Eduardo Frei, had given a green light to the Military. Unquestionably, US intelligence must have played an undercover role in the change of leadership in the PDC.

And continuity in the “Chilean Model” heralded as an “economic success story” was ensured when, 16 years later, Patricio Aylwin was elected president of Chile in the so-called transition to democracy in 1989.

At the time of the September 11 coup, I was Visiting Professor of Economics at the Catholic University of Chile. In the hours following the bombing of the Presidential Palace of La Moneda, the new military rulers imposed a 72-hour curfew.

When the university reopened several days later, I started patching together the history of the coup from written notes. I had lived through the tragic events of September 11, 1973 as well as the failed June 29, 1973 coup. Several of my students at the Universidad Catolica had been arrested by the military Junta.

In the days following the military takeover,  I started going through piles of documents and newspaper clippings, which I had collected on a daily basis since my arrival in Chile in early 1973. A large part of this material, however, was lost and destroyed by my research assistant, fearing political reprisals in the days following the coup.

This unpublished article was written 48 years ago. It was drafted on an old typewriter in the weeks following September 11, 1973.

This original draft article plus two carbon copies were circulated among a few close friends and colleagues at the Catholic University. It was never published. For 30 years it lay in a box of documents at the bottom of a filing cabinet.

I have transcribed the text from the yellowed carbon copy draft [in 2003]. Apart from minor editing, I have made no changes to the original article.

The history of this period has since then been amply documented including the role of the Nixon administration and of Secretary of State Henry Kissinger in the plot to assassinate Allende and install a military regime.

The main objective of the US-supported military coup in Chile was ultimately to  impose the neoliberal economic agenda.  The latter, in the case of Chile, was not imposed by external creditors under the guidance of IMF. “Regime change” was enforced  through a covert military intelligence operation, which laid the groundwork for the military coup. Sweeping macro-economic reforms (including privatization, price liberalization and the freeze of wages) were implemented in early October 1973.

Barely a few weeks after the military takeover, the military Junta headed by General Augusto Pinochet ordered a hike in the price of bread from 11 to 40 escudos, a hefty overnight increase of 264%. This “economic shock treatment” had been designed by a group of economists called the “Chicago Boys.”

While food prices had skyrocketed, wages had been frozen to ensure “economic stability and stave off inflationary pressures.” From one day to the next, an entire country had been precipitated into abysmal poverty; in less than a year the price of bread in Chile increased thirty-six fold (3700%). Eighty-five percent of the Chilean population had been driven below the poverty line.

I completed my work on the “unpublished paper’ entitled “The Ingredients of a Military Coup” (see text below) in late September.  In October and November, following the dramatic hikes in the price of food,  I drafted in Spanish an initial “technical” assessment of the Junta’s deadly macro-economic reforms entitled “La Medición del Ingreso Minimo de Subsistencia y la Politica de Ingresos para 1974′ . Fearing censorship, I limited my analysis to the collapse of living standards in the wake of the Junta’s reforms, resulting from the price hikes of food and fuel, without making any kind of political analysis.

The Economics Institute of the Catholic University was initially reluctant to publish the report. They sent it to the Military Junta for its approval prior to its release.

I left Chile for Peru  in December. The report was released as a working paper (200 copies) by the Catholic University a few days after my departure.

In Peru, where I joined the Economics Department of the Catholic University of Peru, I was able to write up a more detailed study of the Junta’s neoliberal reforms and its ideological underpinnings. This study was was published in 1975 in English and Spanish.

Needless to say, the events of September 11 1973 also marked me profoundly in my work as an economist. Through the tampering of prices, wages and interest rates, people’s lives had been destroyed; an entire national economy had been destabilized. Macro-economic reform was neither “neutral” –as claimed by the academic mainstream– nor separate from the broader process of social and political transformation.

I also started to understand the role of military-intelligence operations in support of what is usually described as a process of “economic restructuring”. In my earlier writings on the Chilean military Junta, I looked upon the so-called “free market” reforms as a well-organized instrument of “economic repression.”

Two years later, I returned to Latin America as a Visiting professor at the National University of Cordoba in the northern industrial heartland of Argentina under the auspices of an ILO project.

My stay coincided with the 1976 military coup d’État. Tens of thousands of people were arrested; the “Desaparecidos” were assassinated. The military takeover in Argentina was “a carbon copy” of the CIA-led coup in Chile.

And behind the massacres and human rights violations, “free market” reforms had also been prescribed, this time under the supervision of Argentina’s New York creditors.

The IMF’s deadly economic prescriptions under the “structural adjustment program” had not yet been officially launched. The experience of Chile and Argentina under the “Chicago boys” was “a dress rehearsal” of things to come.

In due course, the economic bullets of the free market system were hitting country after country.

Since the onslaught of the debt crisis of the 1980s, the same IMF economic medicine has routinely been applied in more than 150 developing countries. From my earlier work in Chile, Argentina and Peru, I started to investigate the global impacts of these reforms. Relentlessly feeding on poverty and economic dislocation, a New World Order was taking shape.

1  For details see http://globalresearch.ca/articles/KOR309A.html  and references below