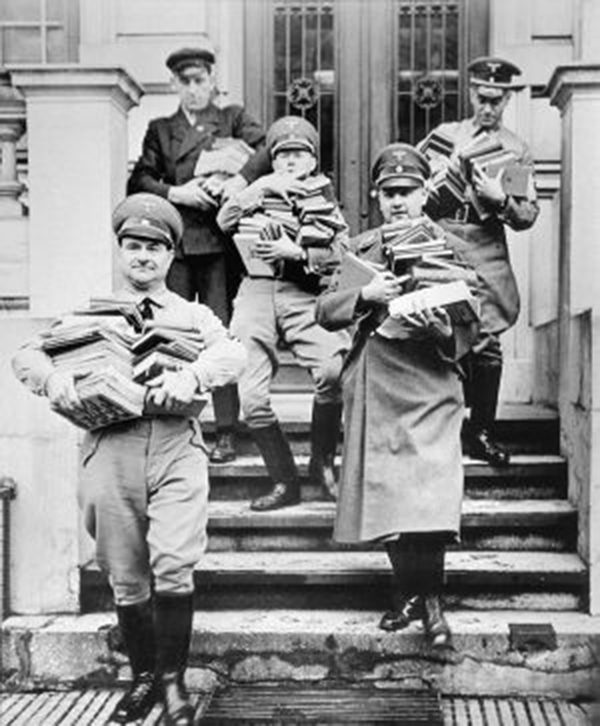 Censorship has been a favorite tactic of fascist dictators for a long time. The Nazis enforced strict censorship and government controlled propaganda in Germany, as shown in the photo above. They were known for their book burnings.

Unfortunately, those same Nazi tactics are being used today by fascist dictators wearing business suits instead of Nazi uniforms and using computer algorithms instead of book burnings.

For a brief time during 2013, Z3news.com displayed ads from Google Adwords, but Google blocked our account due to our content, which they identified as hate speech. Our crime was quoting scriptures from the Bible. It worked out okay though because I decided to remove all ad content from the site to reduce clutter.

So, censoring Christian content is nothing new for Google. They have been doing it for years, but now other major corporations are accusing them of being too soft in their censorship policies, which I find amazing based on my experience with Google. It shows how fast the world is accelerating into darkness as foretold by the prophet Isaiah (Isaiah 60:1-3).

Companies such as Verizon and AT&T have decided to pull ads from YouTube over extremist content in the video platform owned by Google. Alphabet Executive Chairman Eric Schmidt and former Google Senior V.P. of Products Jonathan Rosenberg discuss how they are addressing the issue.

“What we do is, we match ads and the content, but because we source the ads from everywhere, every once in a while somebody gets underneath the algorithm and they put in something that doesn’t match. We’ve had to tighten our policies and actually increase our manual review time and so I think we’re going to be okay,” Schmidt told the FOX Business Network’s Maria Bartiromo. (See the complete report)

Back in 2013, the popular excuse for censorship was “hate speech,” but today there are new favorite buzzwords, including “extremist content” and “fake news.” Of course, the censors have no problem with real fake news sites, such as CNN, NBC, and MSNBC. It’s only the conservative and Christian sites that cross their line. Isn’t that convenient?

The buzzwords may change, but the spirit behind it remains the same. It is the spirit of antichrist seeking to shut down anyone proclaiming the good news of salvation through Jesus Christ.

Thanks for not quitting on us.
Keep up the good work you are doing.

Things can change over night because events are closing in on the deep state. I hope and pray Trump and Sessions subpoena Obama, Brennan and Clappard ASAP before it’s too late and altnews is shut down!! If we could see into the spirit world the battle has to be intense right NOW!! But God is in control and the oligarchs will be exposed and then end time Bible prophesy kicks in. After watching 60 years of communist TV it is so fantastic to see Obama hiding out in the French South Pacific sweating it out! But Z3 and all conservative Christians must make this story go viral, ie, Obama’s surveillance of Trump. E-mail your 2 senators and congressman and all your friends. Time is running out!!!

“Behold, days are coming,” declares the Lord GOD, “When I will send a famine on the land, Not a famine for bread or a thirst for water, But rather for hearing the words of the LORD. Amos 8:11

Sounds like Google is “telegraphing” their pathetic punch so to speak….dont be evil? Maybe we should shun the appearance of evil and Google?

“Disputed news” is also being used. Very timely article, for the time being, we consumers can vote with our feet, as Target now knows. Speaking of censorship, I can’t seems to find the White House Fire article from a few weeks ago…?