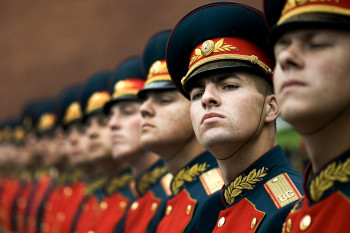 The following dream was shared by a visitor to this site, Carl Manning.

“I had a dream about a Russian invasion in 2009. In this dream, I was in my spiritual body. In this body, I could move with just my thoughts anywhere I wanted to go virtually immediately, and I knew instinctively that nobody in their physical bodies could see or hear me, and I was immortal.

The dream begins in a graveyard. A battle is underway. There are bullets flying everywhere. Some even go right through my spiritual body.  I move to several places in the air above the battle field to see if I can determine who this enemy is.  Just then, I notice a Russian ICBM taking off from the ground behind the spire of a mausoleum in the graveyard.   I decide to go further behind enemy lines. It is then that I notice two Russian soldiers standing by a jeep speaking Russian. They were wearing gray camouflage BDU’s. It was not revealed to me what they were saying or talking about.

I decided to go even further behind enemy lines. At this point, I could make out what had once been an American mall. I could tell because I could see from dirt stains on one of the walls where at one time a “J C Penney” sign had been.   Sitting in front of this mall at two picnic tables were Russian officers. Strangely, their military dress uniforms were not the typical military green but made out of glimmering gold cloth, and they were all laughing hysterically.   I decided to check out the former mall.  The American mall had been completely converted to a Russian military headquarters. End of Dream.”

So, this is so strange but when I read this I immediately thought of the mall over here locally in Beaverton, Oregon. It’s called Washington Square Mall. It has a large graveyard and a mausoleum building near the end which sides with the end of the mall that the JC Penny’s is located. Very weird! Thank you for sharing!

I wonder LLA,.if that J.C.PENNEY,store in your area that you duly noted,.is one that has closed since your May 2015 comment,.or scheduled to close,.?
Perhaps another indication this “Red Dawn”,_invasion is close at hand,.fyi, Se p t.1999,.my eldest son Jordan,.who was 7 yrs old at the time spoke in his sleep,.as i woke up on the floor next to his bed,.he said,.”Dad,_destruction is coming on the Fourth.”,_Thanks,.Robert
arise60vs1@gmail.com

it seems harsh that Jesus would cause (or allow) such terrible judgements,disasters to come on america,,,,,,,,,,but america has taught outrageous evil evolution lies to all kindergarten children to destroy their faith in Christ and send all the children to the second death……..half of social security money is stolen from employers.(america promotes stealing)…..america deserves great disasters, unless she repents…………..Jesus gave us Proof that He is the ONLY True God…….Isaiah 46;9-10…….Only the God of Israel can predict the future like He can,,,,,,but nobody mentions it………..Acts 1 says “many infallible proofs”………Praise Christ!

Secession’s the ONLY answer to save what’s left of the real America. Re-boot an enlarged 15 state version of The Confederate States Of America for the patriots – give the rest of America to the 3rd world invaders and the libs and pants down butt hip hopping zeros and empty headed sports watchers that let this happen. They’ll be happy as long as there’s a Taco Bell and a game to watch.
Meanwhile … patriots STOCK UP and consider how you’ll escape fire. If not many dry trees around you, you can industrial fire proof your homes for cheap. THEY … will use fire and lack of food to HERD YOU DOWN THE REFUGEE ROAD … from which you’ll not return.

Sharing this news article I found minutes ago.
http://www.infowars.com/senior-nato-official-well-probably-be-at-war-this-summer/